The Black and White • April 7, 2021 • https://theblackandwhite.net/69249/opinion/sparking-my-imagination-how-playing-basketball-alone-has-helped-me-through-a-pandemic/

Sparking my imagination: How playing basketball alone has helped me through a pandemic 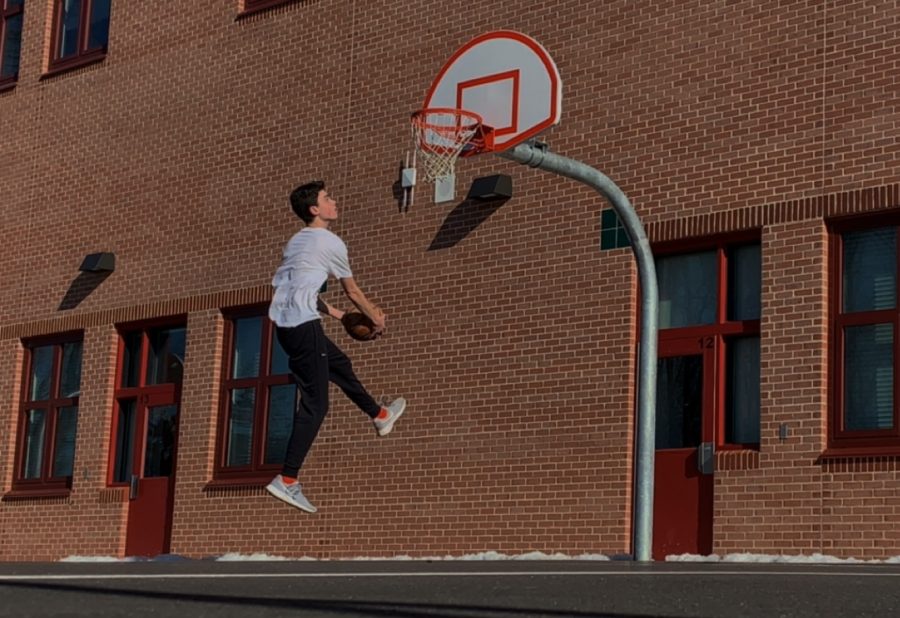 Playing basketball alone is one of many creative mediums that allows a person to use their imagination to the fullest extent in a world where we’re constantly told what to do.

“Twenty seconds to go, Knicks down by two. Quentin Corpuel has the ball with the chance to win the New York Knicks their first championship since 1973. The crowd is on their feet here at Madison Square Garden. Corpuel gets a screen from Barrett, he switches onto James, drives right, steps back and takes a three for the win…”

If you couldn’t already tell by the fact this scenario includes me as an NBA player — or because the Knicks are playing for a championship — this is a fictitious scenario. But in my mind, this is all real.

Over the past year, I’ve played basketball in my free time to de-stress and to allow my mind to wander rather than trying to improve at the sport. When the coronavirus pandemic flipped our lives upside down in mid-March of last year, playing basketball became an everyday activity that eased my fears over the virus, and allowed the boredom of being stuck inside to subside.

While basketball is technically a team sport, nothing compares to the feeling of playing alone. There’s no coach telling you what to do, no set drills and no scoreboard. It’s just the ball, the hoop and your imagination. It’s your world; reality fades away, and all the stresses and worries outside the court begin to disappear.

Like most young kids, I used to rely on my imagination to enhance any activity, whether it was for sports, writing or video games. Yet as I grew older, there became less and less space for imaginative thinking. In school, we’re taught material in the classroom, asked to study that information at home and then are forced to regurgitate it for a letter grade. With basketball, set drills and plays dominated practices and games, and the free, fun style of play I cherished as a kid disappeared.

But on that court by myself, I can be whoever I want. I can lead my favorite team to the NBA Finals, or win the NCAA National Championship. I can recreate iconic basketball moments like Ray Allen’s improbable three pointer in the 2013 NBA Finals or Allen Iverson’s infamous stepback over Tyronne Lue. I can design a whole hypothetical basketball career for myself and become so immersed in it that it feels entirely real.

One night this past summer, I’d been playing basketball for over two hours when my mom called me in for dinner. I snapped back to reality; I had no idea the time had passed.

I was in the middle of Game 7 of the NBA Finals, Lakers vs. Knicks at Madison Square Garden. I had just led the Knicks on a Cinderella run through the playoffs where we met the Lakers in the Finals. The whole series was a battle, and it all came down to Game 7. In the final seconds, being guarded by my childhood idol, LeBron James, I had the ball with a chance to win the championship. I made my move to the basket.

“Five, four, three, two, one…” I counted down to myself. I threw up a prayer.

I blew it. We los-wait. I caught myself. I snapped out of my trance to realize that I controlled the clock. Poof. I added five seconds to the game clocl. Once again, I made my moves to the basket. I threw up another prayer over the outstretched arms of LeBron James. The world went silent for a brief moment.

The “crowd” explodes. I leapt into the air and fist pump, celebrating like I actually won the NBA Finals. I’m sure I looked silly, but I don’t care — I just “won” the NBA Finals, after all.

And the amazing thing is I’ll come back tomorrow and do it all over again. In a world where we are constantly told what to do and how to do it, this experience allows me to dream big and play by my own rules.

Tomorrow, maybe Bradley Beal and I will lead the Wizards to the Finals, or maybe I’ll carry UCLA to the NCAA Championship. All I know is that the second I step on that court, my imagination becomes reality. The possibilities are endless.