Getting tied up in a resented hobby 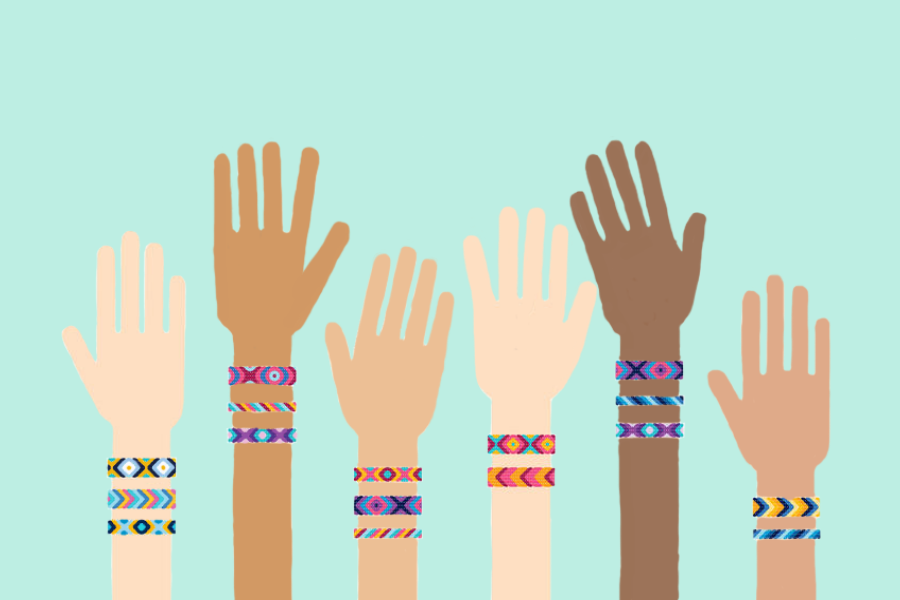 I never would have believed I’d be crawling back to a practice that haunted my childhood, and I never could have imagined a once-in-a-century pandemic would be the reason friendship bracelets waltzed their way back into my life.

When I was a kid, my summers consisted of watching friends make friendship bracelets. At day camps, sleepaway camps and even the pool, the bracelets were impossible to avoid. Counselors would bring out strings in every color and, immediately, we’d all get to work.

Well, everyone except me. Frankly, the macrame activity confused me. And maybe I was a bit jealous too, I couldn’t wrap my mind around how everyone else was able to craft such intricate bands with ease. Something so simple didn’t make sense to me — the knots and patterns just never clicked in my brain — and through that confusion, I despised the thought of trying to figure it out on my own.

I never would have believed I’d be crawling back to a practice that haunted my childhood, and I never could have imagined a once-in-a-century pandemic would be the reason friendship bracelets waltzed their way back into my life. But being confined to my house for days on end brought me face-to-face with a painful truth: I needed a new hobby. And what better hobby to take upon than one which had plagued my past?

After two weeks of waiting restlessly in quarantine, a rainbow of assorted string arrived in the mail. Even as I opened the package, I felt reluctant to succumb to an activity I once dreaded. But I soon realized if I was going to learn how to craft friendship bracelets, it had to be now or never — not exactly the perfect mindset for what is usually a joyful activity.

Weaving soon became a nightmare. The terminology confused me. What made a certain “knot” a double knot? What was the difference between a backward and a forward knot? Visual directions were no help, but at this point, I was determined to figure it out. And to my surprise, I finally started to progress after hours of YouTube tutorials. I pulled out an assortment of yellow, green and blue strings and started to tie. As much as I didn’t want to admit it, I was enjoying myself.

The moment I tied a finishing knot on the candy stripe bracelet, I suddenly felt a wave of exuberance come over me. It was finally starting to make sense to me. My inner ten-year-old felt satisfied with my ever-growing arts and crafts abilities.

Immediately, I was hooked. No pattern seemed too challenging to attempt. I quickly learned a variety of braids, chevrons and floral designs to keep myself busy and creative.

Following each of my successes, I would send a picture to my closest friends, promising the next bracelet I made would be for them, despite not knowing when I’d see them again.

Soon enough, I was able to distribute some of my new crafts at birthday drive-bys and small, socially distant reunions. Some bracelets still sit on my desk, patiently waiting to be tied to the wrist of its rightful owner, even after 10 months.

Although it’s been nearly a year since quarantine first began, I’m still not an expert at making bracelets. If necessary, I’ll take the time to untie as many knots as I have to, hoping for a flawless design. But sometimes, an imperfect knot or fray tells a story of a distraction — my dad calling me down for dinner or my mom knocking on my bedroom door — a moment forever frozen in time.

During these times of uncertainty, friendship bracelets have given me a hobby to fumble through the stress and a way to stay connected with friends I haven’t seen in months, even though they are only a few miles away. Maybe seven years ago, I’d roll my eyes and give a snarky look at the collection of bracelets building in my room, but not now. I’ve spent countless hours cooped up in my room, crafting an intricate pattern for a friend, and I have no regrets. We can all look at the bundle of string tied around our wrists and know that as long as we have our bracelets, we’re always tied together.