The Black and White • March 21, 2021 • https://theblackandwhite.net/69163/feature/students-reflect-on-one-year-of-quarantine/

Students reflect on one year of quarantine 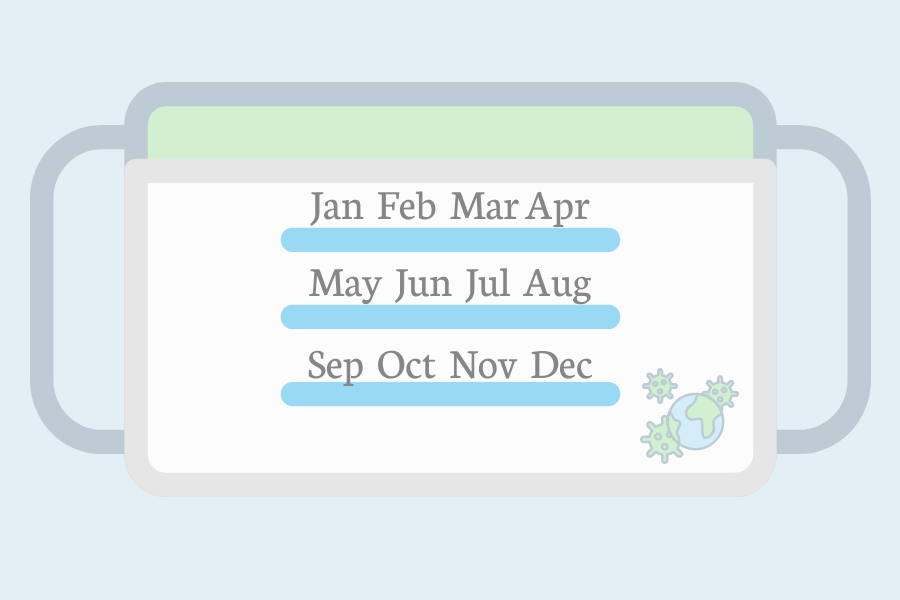 Students have experienced a year of lockdowns, losses and self-reflection.

The date is Thursday, March 12. You just heard a loudspeaker announcement that school will be canceled for two weeks. Your friends are excitedly planning brunches and sleepovers, and filling the calendar with endless fun. This was junior Olly Sitrick’s experience — which countless others shared — before the reality of the next two weeks, and following 12 months, set in.

The past year, which consisted of many reflective, rough and revolutionary moments, was unprecedented, to say the least. Students across the globe have dealt with loss on a wide-ranging scale, anywhere from the end of teenage normalcy to the deaths of friends and family members.

One aspect of student life many students have missed is athletics. Instead of having sports games, pep rallies — and for seniors athletes, one last season with their teams—students spent a year cooped up inside.

When senior Maddie Young stepped off stage with her poms team during her final junior year pep rally, a favorite school event, she didn’t know it would be her last.

“At the beginning I thought it would still be possible to have normal school events, I never considered missing my last season of poms,” Young said. “Until cases started rising and the realization that I wouldn’t have a final season hit me.”

But despite the losses Young has faced, the unexpected nature of the last year has also provided some benefits, including helping her to develop a more open mind set.

“Before the pandemic, my mind was set on specific things I wanted to — and thought were going to — happen,” Young said. “I especially went into the college process with a much more open mind after having not been able to tour schools. It was a good change.”

The unprecedented isolation and alone-time has also forced students to reevaluate their priorities and place greater focus on self-improvement.

“I think the pandemic has been really hard on everyone’s mental health,” Sitrick said. “We’re all struggling, but I think that this much time alone has let me do so much self reflection, and I’ve been able to realize what I want to prioritize.”

In the pre-pandemic era, Sitrick recalls how she used to lack self-advocacy, having prioritized others’ opinions over her own and making many decisions based on what would impress others, she said. Similar to many other teens the past year, Sitrick has used the boundless amounts of free time in quarantine to think about the kind of person she wants to be, and, in turn, has gained a lot of confidence.

Others, such as senior Olivia Eisenberg, took the past year to formulate themselves  through focusing on meaningful hobbies — Eisenberg even turned one of her hobbies into a business.

“In the beginning of quarantine, my sister and I would bake two or three times a week,”  Eisenberg said. “Now, we spend seven hours a day in the kitchen baking,”

Eisenberg has tried to live each day in the moment, grateful that the pandemic has not been as traumatic for her as it has for others. While she thinks it would be nice to have a normal prom and senior year, Eisenberg is focusing on the positives that have emerged from the past year, she said.

“Losing senior year has been disappointing,” she said. “But I’m not mad about it because I know the past year hasn’t been very difficult for me”

The pain of the past year has been shared by billions of people around the world, and while some doomsayers have always warned to be prepared for the worst, Young doesn’t think anybody could have predicted how surreal a global pandemic would end up being, she said.

Sitrick and students throughout the Whitman community agree that the past year, though challenging, has also been a self-reflective and contemplative year in areas few could have imagined. And with the state of the pandemic finally starting to improve, students are excited to start getting back to the activities they’ve missed.

“I am really excited to finally start getting back to normal,” Sitrick said. “Once it’s safe, I’m excited to return to the activities and friendships I’ve missed the past year.”