The Black and White • March 11, 2021 • https://theblackandwhite.net/69066/opinion/nfl-on-nick-how-professional-sports-leagues-can-attract-the-next-generation-of-fans/

NFL on Nick: how professional sports leagues can attract the next generation of fans 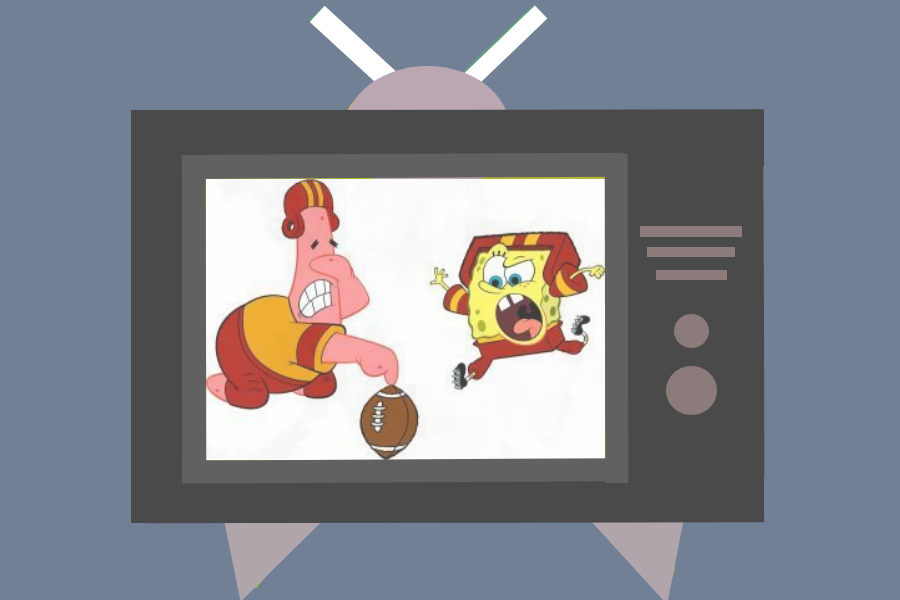 These broadcasting alterations to the game provided a unique experience that helped make younger kids excited about watching football.

If you happened to switch onto the Nickelodeon channel while watching TV on January 10, you might’ve been shocked by what you saw: the New Orleans Saints and the Chicago Bears battling in the first round of the NFL playoffs. But these teams weren’t alone, they were surrounded by bright colors and some of the network’s most well-known cartoon characters. No, you were not hallucinating— for the first time in history, Nickelodeon was broadcasting an NFL game.

Nickelodeon is widely known for its beloved TV shows such as Spongebob Squarepants, Fairly OddParents, iCarly, Drake and Josh, and hundreds more. However, the CBS-owned channel branched out into new territory last month, providing coverage of an NFL game catered towards kids in hopes of introducing professional football to a younger generation.

This was a genius move by the NFL and ViacomCBS — the media conglomerate that owns CBS and Nickelodeon. As media, especially television, has shifted towards streaming over the past decade, sports viewership has begun to decline. If sports leagues intend to remain successful, they need to be continuously “growing the game”; this means reaching out to demographics who may not necessarily be sports fans yet in an attempt to gain their viewership.

By showing a game on Nickelodeon, kids who may find standard football coverage boring now have a reason to watch and even enjoy the game. It’s innovative, inclusive marketing strategies like these which can eventually lead Nickelodeon viewers to transition into sports enthusiasts.

As one might expect from Nickelodeon, there were a number of noticeable changes made to the viewer experience which traditional sports stations lack. The network and the commentators — an unlikely mix of former NFL player Nate Burleson, Nickelodeon actress Gabrielle Nevaeh Green, and CBS announcer Ian Eagle — simplified the play-by-play for a younger audience while maintaining the aesthetic of a sporting event.

To keep younger audiences invested in the game, child actor Iian Armitage, titular star of the Nickelodeon program “Young Sheldon,” popped up on the screen after every penalty to explain the referee’s call and add a joke at the end. In one such instance, Young Sheldon described a holding call as: “The illegal grabbing of a player who is not in possession of the football in order to gain an advantage.” He followed this explanation by jokingly saying: “I don’t even like holding hands, so this is my favorite penalty.” Kids watching the game got a reason to laugh and enjoy the match, as well as learning the rules to a complicated game.

The broadcast additionally featured virtual slime cannons in the endzone — nicknamed the  “slime zone” — which fired off Nickelodeon’s signature green slime whenever a player scored a touchdown. A picture of Spongebob Squarepants was also displayed in between the field goal posts during a kick; cartoon-based graphics were used to compare players to cartoon characters, and the halftime recap used block-animated players to replay highlights.

These broadcasting alterations to the game provided a unique experience that helped make younger kids excited about watching football. Childrens’ attention spans are generally short, leading organizations like the NFL to discover new strategies for keeping games — which can oftentimes be confusing to younger audiences — entertaining. And yes, that can mean using cheesy graphics, cartoon characters and slime machines. The plan seemed to pay off, as the game was the most watched program on Nickelodeon in almost four years with an average of 2.06 million viewers.

The public response was overwhelmingly positive, with many parents publicly posting about their children watching the game on Nickelodeon. Jason McCourty, a NFL cornerback, said his kids watched the game just to see the slime and the commercials.

Another notable football persona, NFL hall-of-fame quarterback Kurt Warner tweeted: “My son loves @Nickelodeon but has never sat and watched a football game with me UNTIL today… I appreciate Nick introducing our kids to the game in a fun & entertaining way!!”

So, if the first attempt at attracting the younger generation to the NFL was such a hit, why can’t other leagues do the same?

Take Major League Baseball, for example. In today’s media market, the sport once known as “America’s Pastime” feels as though it’s  slowly dying, with falling viewership numbers from fans of all ages. Games are taking longer than ever — averaging over three hours — which is far longer than most children and even many adults would be able to remain engaged.

If league executives are looking for exciting new branding opportunities to expand their outreach, it shouldn’t be too complicated; Nickelodeon already laid out the perfect framework.

Expecting a child to sit through the same games is simply unrealistic. But when children are enjoying the program they’re watching — especially if their favorite cartoon character makes a cameo — it’s almost impossible to peel them away from the screen.

This unorthodox display is the future of sports viewing. Though there will always be a main broadcast with traditional coverage, it’s time to branch out and offer unorthodox options for new audiences. Sports leagues need to reevaluate their decades-old approach in getting the support of the next generation of fans — otherwise, there might not be one.