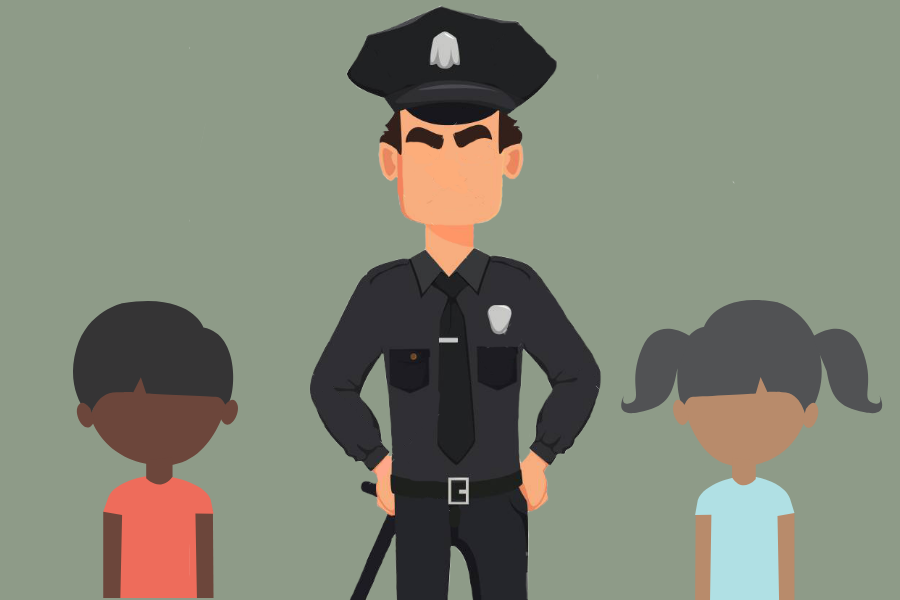 When B–CC sophomore Obse Abebe lost her phone during the second semester of her freshman year, a white classmate told her to go talk to the school resource officer in the security office. The classmate had previously received help from the SRO after she had lost her own phone. However, when Abebe, who is Black, asked for her phone, she was met with interrogative questions and repeated denials. When she came back at the end of the day, Abebe only received her phone after asking to check the office multiple times.

“At first, they were a little shocked, and they kept questioning me, asking where I lost it and how I lost it,” Abebe said. “It was interesting, because the white friend who told me that SROs collect phones never mentioned being interrogated.”

Unfortunately, stories like Abebe’s are all too common in MCPS, and many of them involve more extreme, consequential encounters. The presence of police officers in schools has led to higher arrest rates of students of color and students with disabilities. The County Council should dismantle the SRO program as it disproportionately takes aim at minority students and shifts funding away from much-needed mental health resources.

Data reveals that the effect SROs have on the student body is overwhelmingly negative. Black students account for 50% of arrests, despite making up only 21% of the MCPS student population. In the 2018–2019 school year, Black and Latinx students accounted for a staggering 79% of in-school arrests despite only making up 54% of the countywide student body. And these arrests are hardly warranted, students of color misbehave at the same rates as their peers. Black and Latinx students have routinely experienced discrimination at the hands of SROs, whether that’s through unjustified physical altercations in high school or even differing treatment to white peers in elementary school. Police criminalize nonviolent behavior so much that students can feel afraid or unsafe to learn.

“As a young Black girl, I know what it’s like to feel fearful in the presence of police officers,” said Richard Montgomery senior Lauren Payne. “It’s time we drop this narrative that SROs are helpful or even necessary.”

In November, Montgomery County Councilmembers Will Jawando and Hans Riemer introduced Bill 46-20, which proposed the removal of all SROs from their posts. On February 4, the County Council held a hearing on the bill, during which a strong majority of students, teachers, parents and even lawyers testified in favor of removal. Many students underscored the fact that although individual SROs may build solid relationships with students at their respective schools, the program as a whole discriminates against students of color.

“The problem with SROs, and policing in general, is systemic, not individual,” Jawando said. “There is no doubt that is no doubt that many SROs are good people who care about the community, but that doesn’t change the fact that the system of having armed police officers stationed inside of schools is fueling the school-to-prison pipeline.”

The school-to-prison pipeline is a national trend in which students of color are disproportionately funneled from the education system to the criminal justice system. Maryland leads the nation in incarcerating young Black men, and the SRO program only serves to preserve this legacy of systemic racism.

But students of color aren’t the only ones negatively impacted by the presence of police officers in schools, MCPS students with disabilities also take the fall. Although students with individualized education programs make up only 12% of the student body, they account for 25% of arrests. Since SROs are trained police officers — rather than social workers or counselors — they are not equipped to nonviolently deal with students from diverse backgrounds and situations.

The solution to school safety and gang recruitment is to reallocate funding towards increased mental health programs. MCPS has an abnormally low ratio of psychologists to students with just one psychologist for every 1800 students — far below the recommended one per 500. Moving the $3 million budget for the SRO program to increased mental health resources would get at the root of the problem.

“With a lot of school shootings, the child is mentally ill, and what makes kids vulnerable to gang recruitment in the first place is isolation,” said Avery Smedley, MCPS student and lead organizer of Students Toward Equitable Public Schools. “Those kids need support before they fall.”

Ultimately, students are the ones who are affected by the program, not teachers or principals. In preserving an outdated and, frankly, racist system, the county is prioritizing the perceived safety of white students over the lived experiences of students of color.

The decision to remove police officers from schools in MCPS comes at a time when we, as a nation, are examining the role of over-policing in our communities. Last summer, many Montgomery County students, parents and residents took to the streets in support of the Black Lives Matter movement. Now, student-led activist groups, with the backing of teachers and parents, are advocating for the change that many championed in the past year. Voters and students alike have decidedly endorsed a more progressive, equitable vision for the county: it’s time the council does, too.