The Black and White • February 28, 2021 • https://theblackandwhite.net/69000/alsoinprint/james-jabara-squashes-the-competition/ 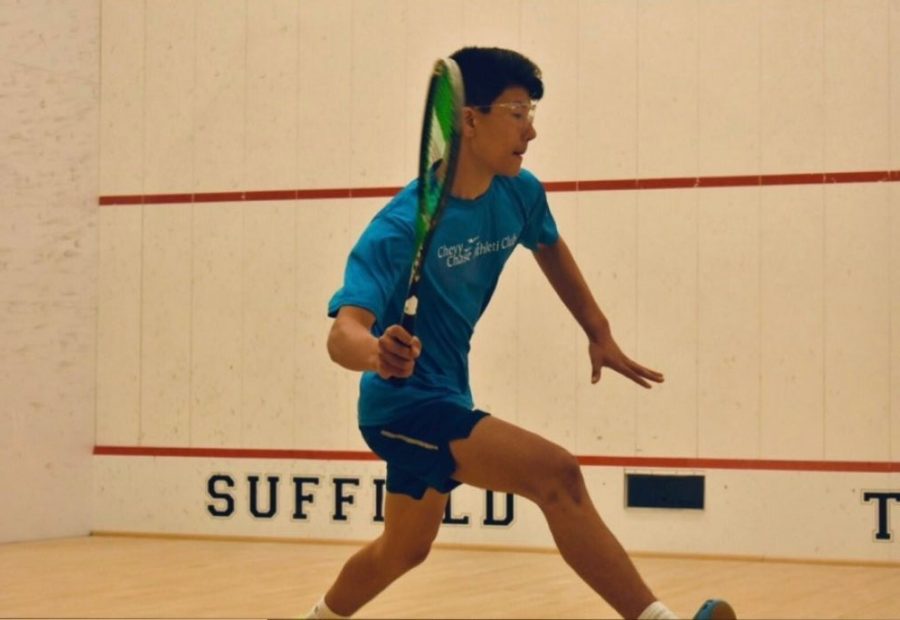 At the recreational level, playing squash is a very lighthearted experience. Competitive squash, however, is a completely different game, James said.

A rubber ball zips at over 100 miles an hour toward senior James Jabara. He hits a shot back that barely lands between the two out lines on one wall of the giant glass box surrounding the court. His opponent counters with an equally impressive shot. The competitors rally until Jabara hits the ball softly off the front of the wall, landing just out of reach of his opponent. It’s only been one point, but the two players look like they’ve run a marathon.

Jabara first picked up a squash racket at a local gym when he was in sixth grade, and from that moment, he was hooked. Jabara was immediately addicted to the game’s fast pace and demand for technical skills, he said.

“It’s such a dynamic game,” Jabara said. “You’re in a room and you’re hitting this ball around so you have to learn all the angles. There’s a ton of footwork involved, there’s a ton of conditioning, and it’s good for you because your heart rate gets really high throughout the match.”

Like tennis, squash is a racket sport that’s played with two or four players, depending on whether it’s a singles or doubles match. While tennis and squash rackets look fairly similar, a squash racket is slightly smaller and has a more narrow shape. A squash ball is also much smaller and bouncier than a tennis ball, and prior to a match, the rubber ball is heated to increase its air pressure, giving it even more bounce. This adjustment ensures that players are able to return shots off the walls more easily.

James’ father, John Jabara, first noticed his son’s interest in squash when James began to devote several hours of the day to mastering the sport.

“He started playing almost every day, studying it and watching championship matches on video to learn how to get better,” John said.

James started playing competitively in seventh grade after attending a squash clinic taught by professional squash player Alister Walker, who in 2009 ranked 12th in the world in the Professional Squash Association. Learning hands-on from a professional player inspired James to make the leap to the competitive level, he said.

“He’s a crazy player,” James said. “The smooth movements around the court, how fast he was, how perfect his shots were — I’d never seen anything like that before.”

At the recreational level, playing squash is a very lighthearted experience. Competitive squash, however, is a completely different game, James said.

“The ball moves so fast,” he said. “Players are diving all over the court, and it gets kind of crazy.”

Once he entered the competitive circuit, squash became a much more integral part of James’ life. Playing squash is a huge time commitment; weekday practices are 90 minutes a day, and weekend practices often exceed two hours. James also frequently participates in squash clinics and competitive tournaments, including a tournament at Squash On Fire, a D.C. squash gym that hosted the squash World Team Championships in 2019.

“There were huge bleachers, including a second story viewing area for people to watch you play,” James said. “There was also live scoring on a big TV above the court. I thought that was pretty cool.”

Squash is extremely popular in Europe and the Middle East but has only recently gained traction in the U.S. Today, according to the World Squash Federation, there are an estimated 20 million players worldwide.

“Squash is gaining a lot of popularity here, for sure,” James said. “A lot of colleges have squash teams that recruit players.”

From watching James’ squash matches up close, John realized that squash is much more than just hitting a ball off of a wall for 30 minutes; it can be very entertaining, he said.

“It’s an intense sport with very quick movements, the highest levels of physical exertion and no room for error,” John said. “Add a screaming crowd and prizes, and it’s a great game to watch.”

There are three keys to excelling in squash: conditioning, footwork and mental toughness, James said.

“It gets so hard toward the end of matches when you feel like you’re going to throw up sometimes because your heart rate has been so high for so long,” James said. “It’s like, who can stay in there the longest, who can keep calm while still hitting accurate shots.”

According to James, the game is much faster when playing adults than when he plays competitors his age. Like any sport, the more you play, the better you become. Footwork, for example, can be the difference between a won and a lost point, he noted.

“Once you get to a higher level, it’s really difficult to move around the court efficiently,” he said. “The ball moves so fast, so you have to establish good footwork habits early on in order to perform well at the competitive level.”

The bleachers at competitive tournaments are typically packed with spectators, and crowds play a large factor in the outcome of squash games, James said.

“I’ve been in matches where 90% of the crowd was on the side of my opponent, so whenever he made a point, the crowd would go crazy,” James said. “That was kind of demoralizing, and it gets in your head. That’s just something you have to deal with.”

In addition to playing on the competitive circuit, James has also played for Whitman’s squash team up until this year, when he opted out because of COVID-19 concerns. Junior James Kiracofe, James’ teammate on Whitman squash, said that James was the best on the team.

“James is a no nonsense guy,” Kiracofe said. “Some people fool around, but James is calm and serious and just focused on the match and playing to the best of his ability.”

When the coronavirus pandemic upended sports in March, James’ squash season abruptly ended, too. While some sports, such as golf and tennis, can be played following social distancing regulations, squash is a different story, James said.

“You’re playing in a closed box, so it’s not safe at all,” he said. “When COVID first started, I wasn’t in a squash facility for about three months.”

Despite not being able to play, James has stuck to a fairly serious workout routine over quarantine. Cycling and road biking have been great conditioning workouts, and boxing has become an excellent coordination exercise as well, he said.

Despite the rigors the sport presents, James enjoys every second of playing squash, even when tensions are unbelievably high.

“Sometimes, there’s so much pressure on you, almost like there’s a gun to your head,” James said. “But when you win those tough situations with the whole crowd against you, it’s so satisfying.”