The Black and White • February 23, 2021 • https://theblackandwhite.net/68944/feature/teaching-toddlers-online-an-inside-look-at-preschool-during-a-pandemic/ 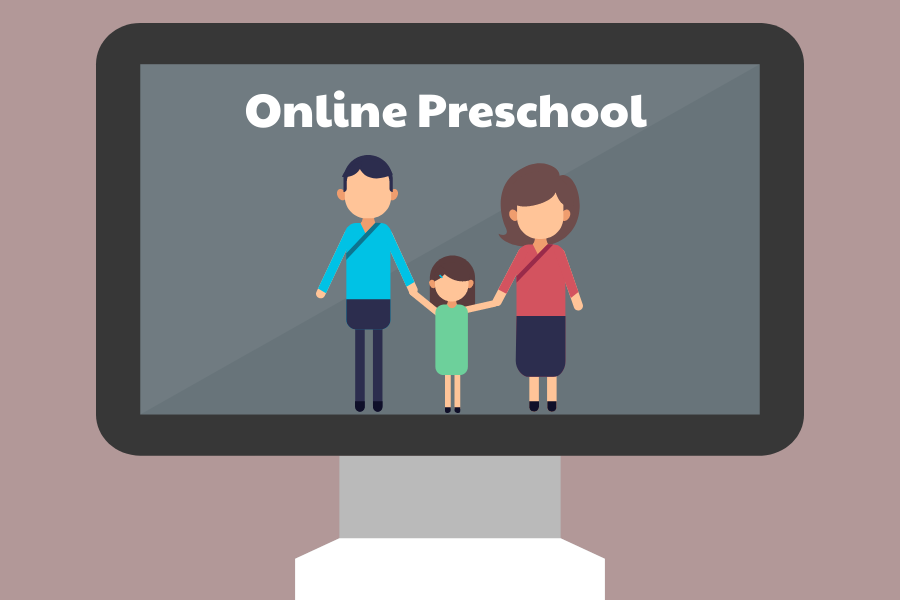 “How long can a three or four year old stare at a computer and learn something?”

Kim Lausin, Director of Beth El Congregation Preschool in Bethesda, pondered these types of questions when deciding whether to open the preschool building for in-person learning for the 2020–2021 school year. Though almost every other preschool in the area offered some sort of in-person instruction, Lausin decided to go completely virtual.

Lausin’s decision was ultimately based on the fact that Beth El is a co-op school, which means that parents are in the classroom every day to help the teachers. Once she realized parents wouldn’t be allowed in the building, the decision to move school online became inevitable, Lausin said.

“It definitely wasn’t easy,” Lausin said. “When I discovered parents could only drop their kids off and pick them up at the front door, that became the deciding factor.”

Enrollment at Beth El dropped significantly after the school announced its plans for a virtual start to the school year, Lausin said. Typically, enrollment fluctuates between 110 and 125 students per year. This year, that number plummeted to a mere 42 pupils. Many of the families who left Beth El opted to send their children to a school that provided in person classes or formed “cohorts” where a few students receive instruction from a private teacher, Lausin said.

While Lausin believes the decision to keep classes online was the safest option, it created a number of hurdles for staff to overcome in order to provide a holistic learning experience.

“The biggest detriment to the whole virtual program is that children are not playing with other children,” Lausin said. “So the question became, ‘How can we facilitate social play when the kids aren’t next to each other?’ And I’ve got to tell you, it was very, very difficult.”

Patti Chandler, who has taught at Beth El for over 30 years, worked to determine which activities could be transferred into the virtual classroom. With the help of fellow Beth El staff members, Chandler and her team reconfigured traditionally hands-on activities for Zoom, including art lessons, which have been a smash hit among students, Chandler said.

“She tells me how she’s grading so many assignments and putting all these lesson plans together so the kids can have the resources to learn and grow in a virtual classroom,” Eisenberg said, “She’s gone above and beyond to help all these kids.”

On the other side of the Zoom screen, childrens’ responses to virtual learning vary from student to student, according to Chandler and Eisenberg. Some appear to be more well-adjusted than others, but students have generally adapted to the circumstances.

“Every child reacted a bit differently, but for the most part, they have risen to the challenge, and have found a way to make it work,” Chandler said. “It definitely took time, but most of them are doing very well.”

When four-year-old Beth El student Luke Jay was asked about his favorite school activity, he proudly whipped out a guitar made from a cardboard box and rubber bands.

“I made this guitar,” Luke declared, visibly content with his craftsmanship. Luke has also enjoyed a number of interactive classroom science activities, including creating pumpkin volcanoes using baking soda and vinegar, he said.

While Luke and many other students have adjusted well to virtual instruction, others have struggled over these past few months. A number of children have difficulty making progress as a result of internet connection issues or a simple inability to concentrate in a virtual setting, Eisenberg said.

Whether a student is excelling or falling behind, all young kids are losing out on the benefits of having school in person. It’s much harder for students to develop stronger regulatory behavioral abilities and build social skills.

Despite the rigors of online school, parent feedback at both Beth El and Whitman’s child development programs has been generally positive. Parents, without physical school buildings for their children to attend, get to spend more time with them.

During a normal year, Luke’s mom, Jessica Jay, works a full time job and is unable to see her son for most of the day. Now, the two of them spend hours of quality time together, all while navigating the challenges of online school, she said.

“I get to participate in everything that Luke’s doing, and I get to be with him during the day,” Jessica said. “That’s really fulfilling as a full time working mom who normally wouldn’t get to do that.”

Jessica also praised the teachers at Beth El for their commitment to keeping their students engaged.

“Luke’s teachers at Beth El are so, so creative,” she said. “From making toothpaste to this homemade guitar over here, they’re really making the best out of this situation.”

Chandler is confident that an eventual return to in person school will allow younger students to make up for lost time.

“Children are quite resilient,” Chandler said. “Once they’re able to have in-person interactions and are able to work in the same room with their peers, I believe they will bounce back.”