The Black and White • February 21, 2021 • https://theblackandwhite.net/68932/news/i-feel-safer-students-respond-to-dc-national-guard-remaining-in-dc-until-mid-march/ 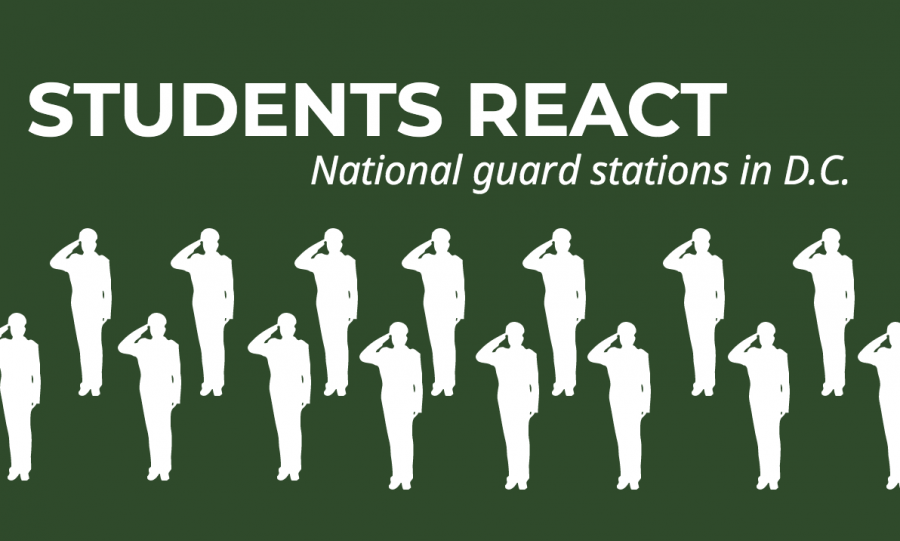 On Tuesday, January 26th, a memo signed by the D.C. National Guard Chief Major William Walker announced that seven thousand D.C. National Guard troops would remain in the nation’s capital until March 31 to support district and federal authorities in anticipation of civil disturbances and protests. The decision comes in the wake of the January 6 Capitol insurrection.

The sight of heavily armed National Guard carrying military grade weapons around D.C has put many students on edge as the National Guard is alienated from the community.

“Off-putting and uneasy are the main words that come to mind when I think about the National Guard in D.C.,” senior Cayla Joftus said. “To see someone wearing a camouflage uniform and carrying huge weapons is not reassuring to our democracy.”

Junior Felipe Debolle believes the heightened military presence is indicative of the rising tension in the D.C. metropolitan area.

“It almost feels dystopian and surreal,” Debolle said. “This just underlines the moment that the country is going through and the danger posed by extremists who stormed the Capitol.”

The presence of the National Guard serves as a reminder of the insurrection and a testament to the possibility of further chaos.

For others, boots on the ground provide a sense of security at a time when further acts of insurrection remain a possibility.

“If they were crazy enough to do what they did on January 6, I could see them trying to invade the White House or worse,” sophomore Maya Blanks said. “But the National Guard presence gives me comfort, because if something were to happen, they would be there to stop it.”

The Jan. 6 insurrection left many students feeling fearful for their safety even after weeks had passed, especially because the attack was only a couple miles away from where most students live.

“I think it’s very terrifying especially how close we live to D.C.,” Blanks said. “The feeling that something could happen puts you into that mindset that you’re just waiting for something to possibly happen which puts you under a lot of stress.”

A number of students believe that, while they remain in the area, the National Guard should do their utmost to support the community, as opposed to mere intimidation, said junior Christina Limansky.

“I think the National Guard presence could cause some fear especially for people of color,” Limanksy said. “Law enforcement, in general, scares people of color out of just living.”

Limanksy is hopeful that the National Guard will help protect the D.C metropolitan community.

“This action is definitely a great feeling of protection over the community,” Limansky said. “My hope for the National Guard is for them to do their job effectively and to keep the citizens of D.C. safe.”