The Black and White • February 19, 2021 • https://theblackandwhite.net/68924/opinion/trapped-together-how-quarantine-redefined-my-sibling-bond/

Trapped together: How quarantine redefined my sibling bond 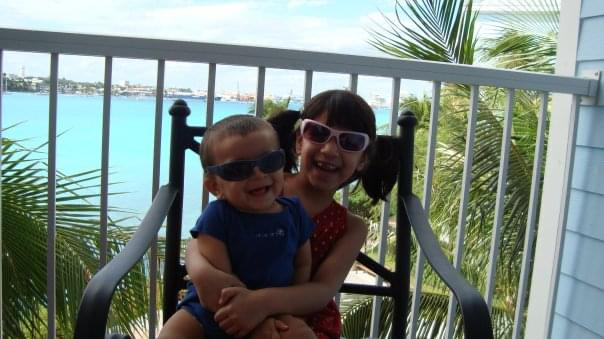 My brother, Zaki, and I pose for a photo while on vacation in the Bahamas 12 years ago.

“Why are you so annoying?”

“You’re the annoying one!”

Sibling screaming matches and silent treatments are both typical scenes from the Ilias household, like they are for many children around the world. Now, forced to quarantine together for months on end, sibling fights have undoubtedly become more common; my brother and I are no exception.

But while extended periods in close proximity have caused petty fights between us, becoming lunchmates, teachers and confidantes has brought my brother and I closer together than ever before.

Instead of walking through Whitman’s halls among hundreds of other students each day, I only see the same three faces as I move around my home. Whenever I get sick of the monotony of quarantine, I often find myself strolling into my brother’s room to complain or to ask him how his day is going — and he does the same.

My brother started 6th grade at Pyle Middle School virtually this year, which makes his transition to middle school much harder and left him reliant on my help and guidance. He often comes to my room to ask me questions about Spanish conjugations or earth sciences. Being able to learn and study together is a part of our relationship that only exists because of quarantine, and I’m grateful for it.

I love being there for my brother, and I feel proud that I’m actually able to help him when we argue about which answer would be correct, create detailed flashcards or experience the joy of submitting an impressive assignment together. Likewise, whenever I’m going through rough patches in my life, my brother is always there to offer words of wisdom or a shoulder to cry on.

Sometimes, the only way to release my frustration about the state of the world is to resort to the natural sibling response: starting a random fight. It may seem cruel or nonsensical, but what can I say? Quarantine has forced us all to emotional extremes.

Just the other day, my brother and I got into a disagreement over an insignificant detail in a movie we had recently watched. Though the fight accomplished absolutely nothing, having someone to watch TV and argue with helped me get through a stressful week and focus on something different than my worrying.

Whether we’re studying Spanish or getting in pointless arguments, I cherish the time I spend with my brother. I realize that in less than two years, I won’t be living in the same home as him anymore, and I won’t get to wake up to my brother turning on the TV or exchange secrets with him at the table. But even when we’re not always under the same roof, I hope we continue to share the same bond. As much as he may get on my nerves — and although I hate to admit it, as much as I can get on his —  I need to make the best of this remaining time.

To anyone reading this who is sick of the pointless fights with siblings, think about that next absurd debate as a blessing. You have someone who knows your most admirable and your most aggravating qualities, someone who will be there when nobody else is available. Whether or not you always like it, you have a built in companion that’ll be there for you, no matter what.