The Black and White • February 5, 2021 • https://theblackandwhite.net/68878/feature/political-debate-is-dead-whitman-students-believe-hostility-and-moral-judgements-have-ruined-civil-disagreements/ 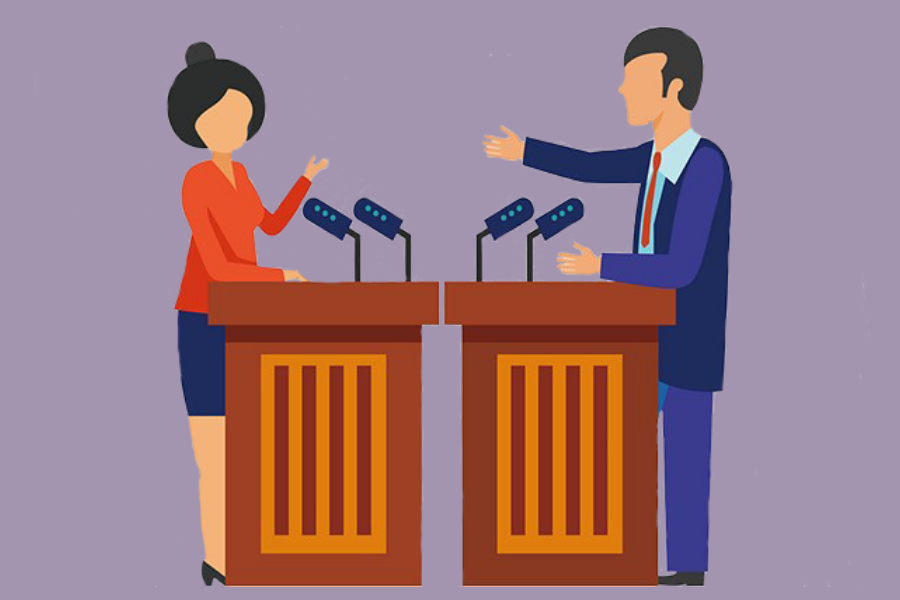 Many Whitman students feel that respectful political debate is no longer possible.

As junior Robert Marshall prepares to repost a photo from @Whitman4Trump, an Instagram account formed by an anonymous Whitman student in support of Donald Trump’s reelection campaign, a sudden wave of anxiety washes over him. He thinks back to just several weeks prior, the last instance he shared a similar post online, and the hostile response it drew. After a moment of hesitation, he presses send.

A few minutes later, Marshall begins receiving direct messages through the app. “No,” the first one reads, followed by a red heart emoji. The next few grow increasingly hostile, including “you’re an idiot” and “you’re so stupid.”

This experience is nothing new to Marshall; as a member of the political minority within the Whitman community, he has often felt ostracized for his beliefs.

Meanwhile, just a few miles away from Whitman, Black Lives Matter and Joe Biden signs are repeatedly being vandalized and stolen.

The modern political climate is as polarized as it has ever been. From all sides of the political spectrum, name calling, moral judgements and bitterness have plagued political conversations.

AP Government teacher Peter Kenah has noticed this trend come to life in his classroom.

“Students seem less likely to engage each other,” he said. “I’ve really noticed that, starting with the Trump administration, instead of just diving into it and being comfortable with whatever the outcome is, there might just be tippy toeing around the issues and not taking a deeper dive.”

He also described the effect of social media — most people only engage online with others who agree with them.

“It’s so easy to get stuck in the echo chamber and not hear different people,” he said. “Students tend to surround themselves with people who have similar views to them. And from this you lose the variety of opinion.”

Political disagreements have even strained certain relationships, as shown in a recent poll by The Black & White. The survey revealed that 95 out of 170 Whitman seniors believe their respect for a peer would change after learning their political affiliation. One student, junior Mira Kisslinger, said that differing political views contributed to her ending a relationship.

“I was really sad at the time,” she said. “I had always enjoyed talking politics, but after a friend alienated me for my views, I now feel hesitant to share my opinions sometimes.”

Now, in a time of such a sharp ideological division, one might expect that political debate is at an all time high. Based on the responses of Whitman students, however, substantive dialogue the community has actually withered as a consequence of polarization.

“Everyone is so attached to what they think, and they just think everyone else is wrong,” junior Ezra Tinky said. “Disagreements often quickly devolve to name-calling and yelling battles, and all the nuance to the conversation is gone.”

Kisslinger agrees, citing a change in the culture around these conversations.

“I feel like people are disagreeing more than ever, but the whole idea of political debate has changed,” she said. “Instead of talking to each other, people are talking at each other.”

For Marshall, things have escalated beyond conversation, too.

“During my freshman year, I posted a picture with a Trump hat on,” Marshall said. “This one person saw it, and started harassing me. He pushed me into lockers, punched me and even tried to slap me.”

Political engagement can often serve as a conduit to better understanding complex issues. But in light of heightening factionalization, the echo chamber of social media algorithms, and partisan news channels, differing opinions are harder to come by. Dialogue can often seem pointless, especially when others are unwilling to hear out perspectives that contradict their own, Tinsky said.

Kisslinger is often reluctant to share her views, specifically within her workplace.

“One time my boss was complaining to me about politics and I just felt scared to share my opinions,” she said. “I was scared she wouldn’t like me if I said something contrary to her beliefs.”

Such deterrence from sharing political opinions prevents valuable and educational discussion. Tinsky believes that one way to bring back respectful political debate can be through school-sponsored public forums, like OneWhitman.

If approached correctly, these conversations can be extremely rewarding, Kenah said.

For students who feel uncomfortable discussing issues with those who disagree with them, Kenah gave some advice.

“Take a risk.” he said. “Seek out those who have different opinions, and try to pick their brains. Come at it from an angle of curiosity, because then the other person doesn’t feel threatened. Don’t try to win, but try to understand where the other person is coming from.”