The Black and White • January 10, 2021 • https://theblackandwhite.net/68743/opinion/mcps-stop-the-hypocrisy-save-the-edson-lane-forest/

MCPS: Stop the hypocrisy, save the Edson Lane Forest 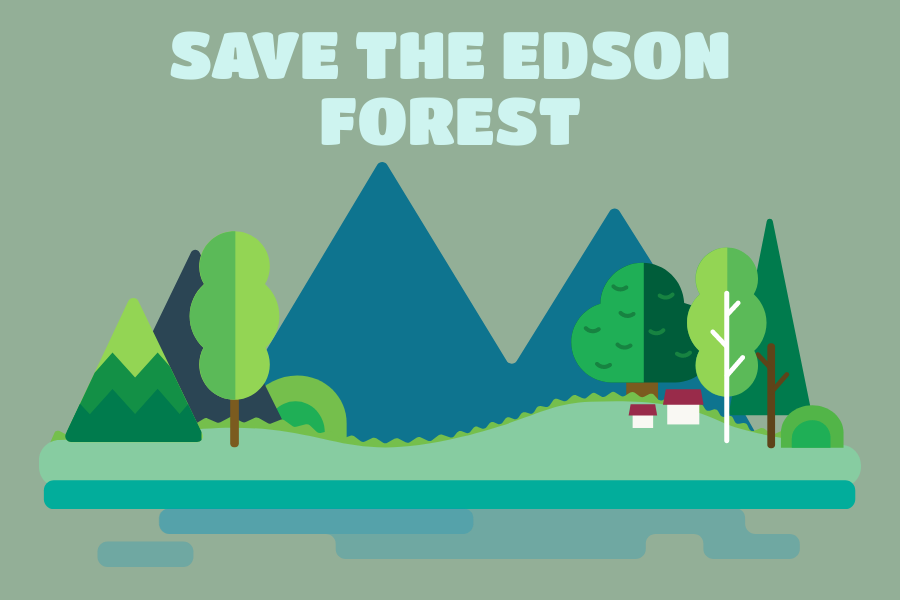 Helping save the Earth, especially forests such as the Edson Lane Forest, can curb the devastating effects of climate change.

Linda Miller watched in awe as a snowy owl perched itself on a tree in the Edson Lane Forest. This bird-of-prey, which migrated from Canada, seemed straight from the magical land of Hogwarts.

Throughout Linda’s life, the Edson Lane Forest has helped her connect with nature, because she lives in the Timberlawn community behind the forest. There, she watches the seasons turn, encounters the liveliness of animals bustling in the trees and breathes fresh air. However, a new construction project is now threatening those experiences.

MCPS is planning to cut down 6.8 acres of the Edson Lane Forest to create space for Charles Woodward High School’s new $20,000,000 athletic stadium. Patricia O’Neill, member of the MCPS Board of Education, said that the county is in the process of rebuilding the school to fit 2,700 students.

The county’s hypocrisy in these actions is apparent: the County Council has passed a resolution regarding emergency climate mobilization and MCPS has stated their continued commitment to environmental sustainability. The county’s enthusiastic pursuit of the project contradicts previous climate conscious stances.

Members of the community stand vehemently opposed to the county’s plan to cut down 75% of the forest.

“The county is known for leaving very big environmental footprints on their sites, both with the way they use electricity and the stadiums they build,” Timberlawn community member Carla Sguigna said. “This is not sustainable. We cannot build a huge stadium for every new high school.”

Though this patch of land may seem small, it is one of the few natural spots left in our community. Growing industrialization has consumed our neighborhoods, from the development of Pike and Rose to construction along Montrose Parkway. Cutting down greenery for convenience’s sake will only be detrimental to our environment.

Deforestation accounts for 10 percent of climate change emissions. As trees are cut, they are no longer able to sequester carbon within our atmosphere, leading to an increase in greenhouse gases. Greenhouse gases further warm temperatures by trapping heat within the atmosphere, contributing to rising sea levels and devastating communities — including ours.

When people say that the desecration of one community forest won’t change anything, remember that this mindset is exactly what has led us to the brink of this global catastrophe. Moving forward, it is imperative that our elected officials prioritize the climate when crafting policy.

The destruction of this forest will also leave many organisms without homes. Over one hundred mature trees live in the area, including a rare breed of Umbrella Magnolias, all of which will be collateral damage in this latest development endeavor.

Susan Bender, a local member of the environmental protection group Audubon Society said that a family of foxes, a group of raccoons, multiple owls and plenty of other creatures call the forest their home. In fact, one native deer gave birth to triplets this summer. Destroying their habitat will leave all these animals without homes.

The Board of Education and County Council has been adamant about the future of the stadium; plans will move forward as both local government boards see it as an equity issue.

“Charles Woodward would be the only high school in the county that would not have a stadium,” O’Neill said. “My number one interest is providing school facilities that are adequate for the future children of Montgomery County.”

Though it’s fair for Charles Woodward to receive a stadium, it shouldn’t come at the cost of our environment. Community members proposed sharing Walter Johnson’s stadium, which is located only a mile down the road from Charles Woodward, but MCPS rejected the idea citing scheduling difficulties. In light of other proposals, MCPS should collaborate with environmental societies on an ideal solution to save the forest and provide Charles Woodward High School with the facilities it deserves.

No one — and no one’s children — should be forced to remember the natural wonders of the Earth through photographs and documentaries; we should be able to preserve our planet. Our future boils down to our actions today. We often say that we must make changes to our lifestyle in order to make it more sustainable; now is that time. Let’s save our forest and our future.