The Black and White • January 9, 2021 • https://theblackandwhite.net/68739/opinion/whitman-support-lgbtq-students-inside-the-classroom-too/

Whitman: support LGBTQ+ students inside the classroom, too 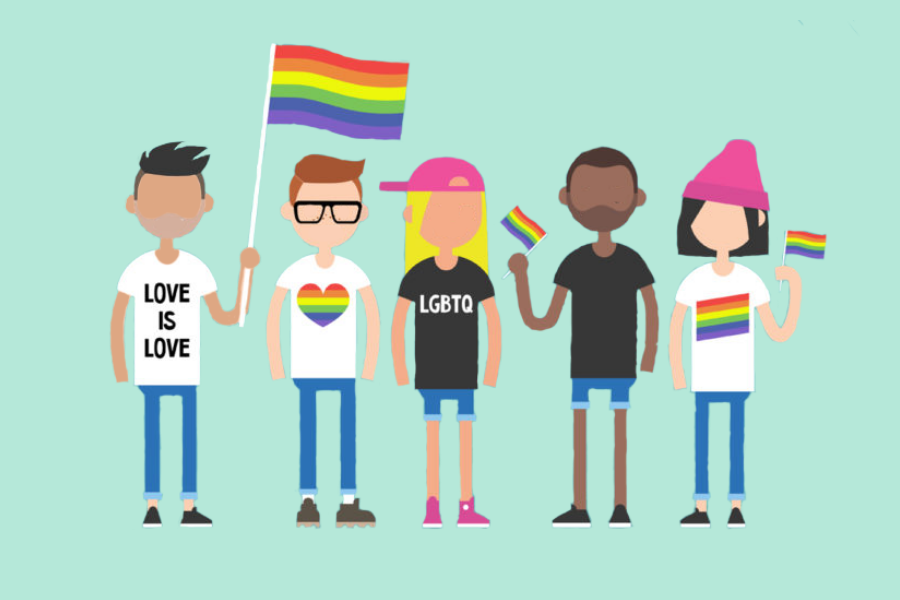 At Whitman, LGTBQ+ students face harassments in a variety of forms, from microaggressions to death threats.

Harassment, dead-naming and misgendering are just a few of the countless issues LGBTQ+ students encounter in the classroom. Despite Whitman’s progressive exterior, its failure to address the concerns of LGBTQ+ students has left many of our peers feeling isolated.

Students regularly face discrimination from their teachers and fellow classmates, resulting in a cycle that perpetuates ignorance and lacks a productive LGBTQ+ educational framework. Whitman must make a greater effort to be more inclusive of LGBTQ+ students.

“I definitely worry about my friends getting harassed,” said senior Bailey Galt, who identifies as non-binary, asexual and aromantic. “If I wasn’t able to protect myself as I think I am, and if I had less self confidence than I do, I would be afraid.”

Homophobia and transphobia throughout the Whitman community is a direct result of the lack of understanding and compassion for LGBTQ+ students. Without any formal guidelines on LGTBTQ+ education, MCPS risks causing further harm to the student population.

“I had a teacher who asked for pronouns at the beginning of the year, and then just sort of referred to me by the ones that she thought I was using for the rest of the year without paying attention to them,” Galt said.

Compared to the more severe acts of discrimination LGBTQ+ students encounter, harassment and misgendering can feel disturbingly benign. Students have, in past school years, reported hate letters and death threats on account of their identities.

Junior Leo Levine, who identifies as transgender, has been targeted by students for many years, recieving threats through social media.

“I mostly delete and report them,” Levine said. “They’re 90% Whitman students although sometimes they get their friends from other schools to join in.”

Alongside harassment, LGBTQ+ students continue to face issues over accessibility. Cisgender, able-bodied students have the privilege of easily accessible restrooms. For gender non-conforming students, non-gendered bathrooms are inconveniently located on the first floor of Whitman’s school building, whereas the majority of classes are located on the second or third floors.

Opponents may argue that Whitman does enough already for LGBTQ+ awareness and inclusion, with its two gender neutral bathrooms, biweekly OneWhitman meetings and a student-lead gender and sexuality alliance. But despite the school’s current efforts, harassment and ignorance continue to be prominent issues. All students deserve to feel safe and maintain clear access to facilities in their school.

“There are instances where I feel uncomfortable with my identity,” said sophomore Aidan Bazan, who identifies as gay. “Sometimes people don’t understand why it’s not acceptable to say things like ‘they make it their whole personality’ or the ‘gay best friend.’ It’s socially acceptable, and I think that needs to be addressed.”

Though Whitman may sport a liberal political climate, conformity remains a prevalent issue. It can be difficult to come to terms with your sexuality or gender identity while living in a privileged, heteronormative environment.

Whitman needs to provide extensive training to teachers on these issues, as they have, and inevitably will come up in the classroom. Educational seminars should be mandated in classes, especially biology and history, which would have the most direct interaction with such topics. Additionally, OneWhitman needs to focus more specifically on LGBTQ+ issues.

To prevent prejudice, you have to call people out on it, and you have to take action against it. LGBTQ+ students have to know that their straight friends have their back and will support them.

Something as simple as not dividing groups of “boys” and “girls” in class is a step in the right direction.

“As peers you have to take it upon yourself to not be a bystander,” junior Jaymie Beers said. “If you see something, you have to step up and be the advocate, because some people are scared of advocating for themselves.”