The Black and White • January 7, 2021 • https://theblackandwhite.net/68704/news/shocking-but-not-very-surprising-stunned-whitman-community-responds-to-capitol-insurrection/ 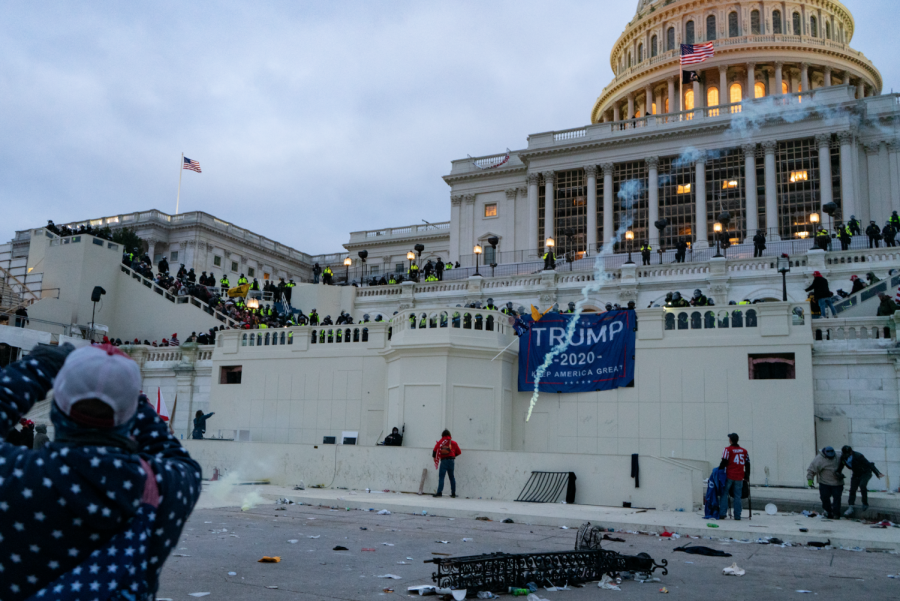 What was supposed to be a normal Wednesday spent doing homework and attending teachers’ virtual check-ins was instead one in which students could hardly look away from social media feeds and cable news programs.

On January 6th, the Whitman community watched in shock as a violent mob of pro-President Donald Trump rioters stormed the Capitol Building in Washington, D.C. Thousands of Trump’s supporters amassed on Capitol Hill as Congress convened to confirm President-elect Joe Biden’s victory in the Electoral College.

The storming of the Capitol stemmed from a morning rally on the South Lawn of the White House, where President Trump directly encouraged his supporters to “march down to the Capitol,” causing a group of insurrectionists to overrun Capitol Police barricades and illegally flooded the premises. Using flagpoles and fists as battering rams, the group then shattered windows and brought down doors in order to enter and subsequently vandalize the Capitol building.

While our country will forever remember the day for its unprecedented desecration of the legislature, students within the Whitman community will mark it as one of fear, uncertainty, and disbelief as the mob descended on the Capitol, which, at 20 miles away from Whitman, is essentially Bethesda’s backyard.

“The Capitol is a place I absolutely love,” said junior Elizabeth Dupree, who watched the events unfold in real time. “It was terrifying and upsetting to watch, and Capitol Police should have been tougher.”

Some remark that the events were not completely unexpected, given the tumultuous nature of the past four years and the rhetoric put forth by President Donald Trump.

“I’m disgusted and frightened,” senior Olivia Eisenberg said. “But this was completely unsurprising.”

Junior Parisi Fida sees the insurrection as a fitting end to the Trump era, a presidential term marked by rampant political polarization in the United States.

“These acts of terrorism are the culmination of the past four years of Donald Trump’s presidency,” Fida said.

On social media, many students compared the largely peaceful Black Lives Matter protests, which were consistently met with heavy police presences in the summer, and yesterday’s events, which initially received a toned down response from law enforcement.

“Imagine if this was a Black Lives Matter protest or if these terrorists were people of color,” junior Felipe De Bolle said. “There would have been much more tear gas, arrests, and use of force.”

On Wednesday night, the Board of Education put out a press release offering support to MCPS students in classes following the insurrection. As a result, many teachers spent class time on Thursday discussing the previous afternoon and evening’s events, with some English and history teachers crafting lesson plans around the insurrection.

Senior Jeannie She felt that these impromptu discussions demonstrate necessary respect towards a politically active and engaged student body.

“It’s encouraging to see the acknowledgement that the youth are not naive and able to have these difficult conversations,” She said. “I am appreciative of Whitman and MCPS administration.”