The Black and White • January 6, 2021 • https://theblackandwhite.net/68693/opinion/watching-culture-come-to-life-my-experience-with-foreign-media/

Watching culture come to life; my experience with foreign media 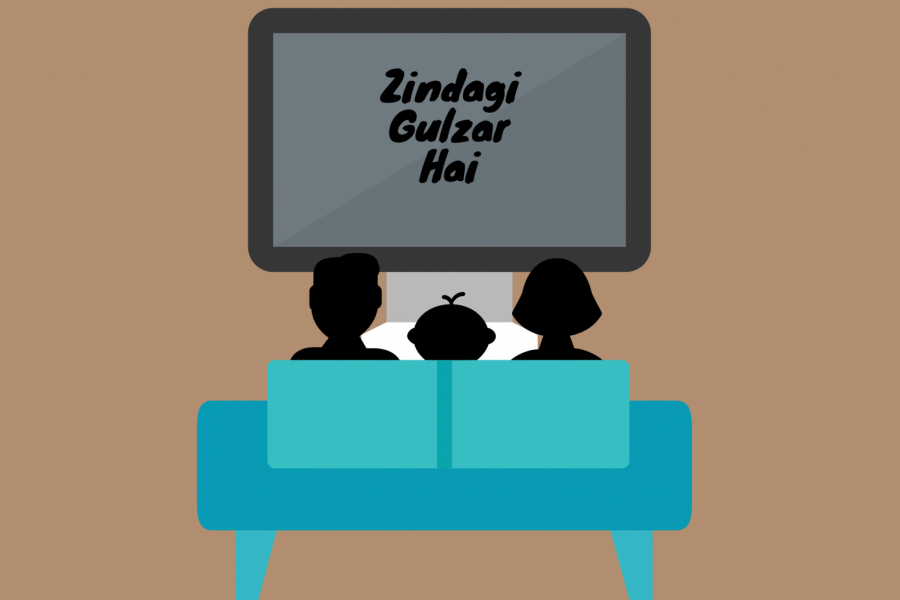 One of my favorite Pakistani TV shows, "Zindagi Gulzar Hai," is a class-conscious drama which taught me many Pakistani cultural elements.

Curry and lentils steamed on the stove, my father sat with his feet up on the couch while my mother and grandmother quietly talked with one another. An intense Pakistani drama played out on the TV, with the hero sheepishly asking the heroine for her hand in marriage. Even though I was only eight years old, the show instantly reeled me in. I have since learned that watching foreign media is one of the best ways to immerse yourself in your cultural heritage.

Twenty years ago, my parents bravely emigrated from Pakistan to the United States. For my whole life, I’ve resided 7,000 miles away from my ancestral home. Without exposure to my heritage, it can be easy to forget where I come from and how past generations of my family lived. But luckily, I was able to find this exposure in an unconventional way: Pakistani media.

I see many of my friends struggling with a similar culture shock, and I too have dealt with the confusion that comes from balancing two cultures, from having a hyphenated identity. Watching Pakistani media from a young age has helped me remain in touch with my Pakistani and family culture.

I grew up with my grandparents down the street, where Pakistani TV played around the clock. Whenever the adults were watching a drama series, I would sneak in to watch as well, slowly picking up on the intriguing storylines. While I’d already known how to speak Urdu— Pakistan’s national language— watching dramas expanded my understanding of the language.

Pakistani television also taught me about my heritage and culture. I learned to bow my head when greeting an elderly relative, to offer my opinion when asked but not speak excessively and to help the host of a dinner with preparations. I learned how to appropriately act around my relatives and to unflinchingly accept my mother’s advice, no matter how much it confused me. I developed a deep respect for a tradition in which you could indicate your feelings without explicitly stating them, in which relationships are sacred and where people are more than willing to help one another.

One of my favorite Pakistani dramas is called Zindagi Gulzar Hai, which translates to “Life is a Rose Garden.” The storyline follows the relationship between an upper-class playboy and a determined woman from a low-income family.

The drama is extremely class-conscious: the difference between the lifestyles and families of the two takes center stage, and this distinction defines the main characters’ relationship. I picked up on important elements of Pakistani culture, such as the emphasis families place on educating their children and how, despite prevalent income disparities, people try to work tirelessly to improve their lives. While these are all elements of numerous cultures, education is a particularly essential value in Pakistani families. The discrepancies in social class can make it even more critical for children to sculpt their futures through hard work.

I also learned the cultural value of respect for parents. Specifically, Pakistani media taught me that two people don’t make the decision to get married on their own; they must involve their parents every step of the way. Learning cultural norms like these made me realize the wondrous and the confusing parts of my culture, educating me on the dynamics and unwritten rules by which people in Pakistan live their lives.

Beyond being a fun diversion, viewing Pakistani media made me feel like I was truly in the country. I learned typical Pakistani jokes, developed an affinity for chai and curry and longed to attend a festive wedding with elegant, embellished dresses and fast-paced Bollywood music. I felt as if I could now relate to what the characters on screen were experiencing and that I was a part of their culture.

I realized that, regardless of how the West might characterize it, my culture is full of awe-inspiring intricacies. Whenever I visit Pakistan, I never feel like a tourist from far away but rather like someone who has always belonged there. And so, sitting on my couch 7,000 miles away in a completely different country, I still feel like a Pakistani.