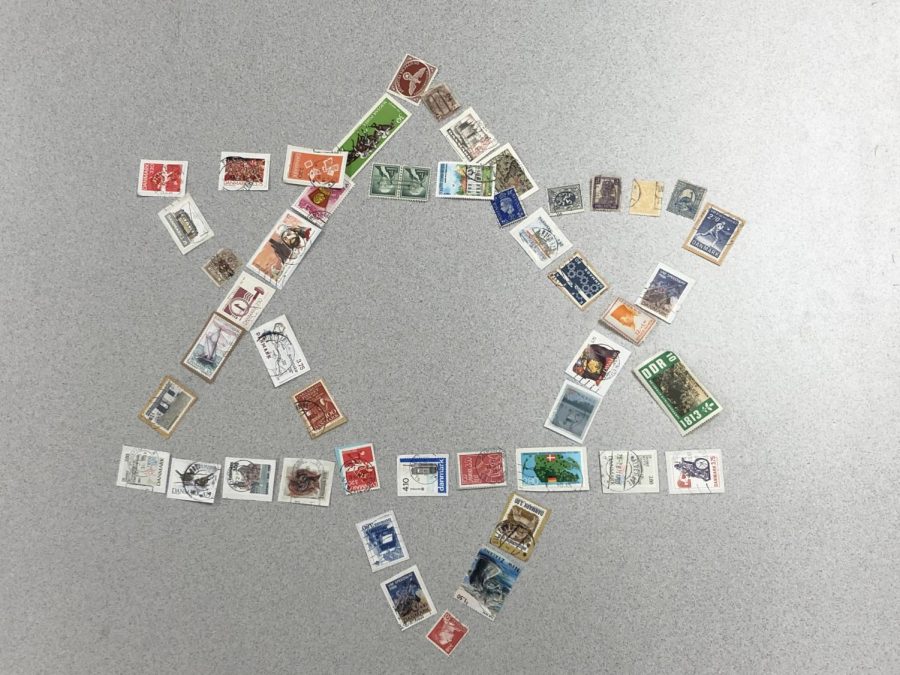 Hebrew school teacher Richard Sloane has collected millions of stamps, each representing a live taken in the Holocaust.

When Hebrew school teacher Richard Sloane announced that he would collect 11 million canceled stamps, even his mother thought he was crazy. Though canceled stamps are worthless to an average stamp collector, since they have been used once and can never be used again, they’re invaluable to Sloane. He started his stamp collection in early 2017 with one goal: to collect individual stamps to represent each victim of the Holocaust.

“As soon as you say 11 million stamps, people’s eyes pop out of their heads,” Sloane said. “But if 11 million seems like a lot of stamps, why don’t people have that same extreme reaction when they hear about the 11 million deaths in the Holocaust?”

Since 2017, Sloane has collected millions of stamps from students, teachers, and stamp collectors all over the world and is currently looking for a meaningful way to display them. Sloane has reached his 11 million stamp goal through a recent partnership with the American Philatelic Society, a nonprofit organization for stamp collectors, but has no intention of stopping. He wants to collect stamps that represent the victims of every hate-fueled act of violence that has resulted in death.

Teaching at Temple Emanuel, a synagogue in Kensington, Sloane felt that his students had become numb to frequent tragedies, such as school shootings and hate crimes. Sloane believes his students’ desensitization to upsetting headlines stemmed from a detachment from historical hate crimes and genocides, he said.

To find a way for students to respond thoughtfully and meaningfully to what he calls a “tsunami of bad news,” Sloane created an awareness campaign about the Holocaust. He was inspired by the documentary “Paperclips,” in which public school students undertook a project of similar magnitude and collected six million paperclips to represent the six million Jews who died in the Holocaust. After realizing that his students similarly had trouble visualizing the tremendous number of deaths during the Holocaust, Sloane sought out a way to help his students understand the full impact of the Holocaust.

His project, titled STAMP IT!, encourages his students to bring canceled stamps to class.

“Each canceled stamp represents a canceled life,” Sloane said. “It’s a beautiful metaphor too. Stamping out hate and stamping out discrimination. Stamping in love and compassion.”

Junior Miriam Saletan was one of Sloane’s students the year he started the project at Temple Emanuel. She and her classmates helped Sloane collect and count the canceled stamps. The class set up a donation box in the lobby of the synagogue and reached out to a few other congregations within the area, including Congregation Har Shalom in Potomac and Congregation Beth El in Bethesda.

At first, Saletan was doubtful that Sloane could even reach one million stamps. But at the end of the school year, the project began to gain momentum. More than just students started to donate, and Sloane began receiving packages in the mail full of stamps. Saletan said she walked away with a change in perspective.

“I learned a lot because I got a visualization of the sheer number of deaths,” Saletan said. “Even holding those stamps puts everything into context. It showed me the impact of literally holding a life in your hands.”

Saletan was both shocked and proud when she discovered Sloane had reached his goal of collecting 11 million stamps, she said.

Reaching this goal didn’t happen overnight. Until early 2019, Sloane had been publicizing his project largely by himself. He worked with local synagogues to collect the stamps and would infrequently receive packages from stamp collectors who heard about his project through an email Listserv. He had yet to reach one million stamps.

“Here’s where the story gets good,” Sloane said.

One of Sloane’s many update emails was “mysteriously” forwarded to Scott English, Sloane said. English is the executive director of the American Philatelic Society.

“It was amazing,” Sloane said. “I couldn’t think of a more perfect time to get on board with the project. Before, I was just fumbling around until something stuck, but having Scott English on board was a game changer.”

English believes that the ultimate goal in stamp collecting is historical preservation. The only way to combat hate and ignorance is with history and the truth — and stamps are a powerful reminder of history, he said.

As executive director of the APS, English could have easily given Sloane an extra 10 million stamps and the whole project would be over. But Sloane felt that having just one primary donor defeated the purpose of the project. He still wanted to find ways to involve as many people as possible, he said. Ultimately, Sloane declined the offer of receiving the remaining 10 million stamps he needed from the APS. He and English decided together that a fitting number for the APS to donate was 1.5 million stamps, to represent the number of children that were murdered in the Holocaust.

“It’s an immediate connection to the people — the kids — that Sloane helps out,” English said. “It shows children under 18 that they are part of this group. People just like them had their lives stripped away.”

When English delivered the 1.5 million stamps to Sloane’s Hebrew school class, the room became silent and the kids were incredibly touched, English said.

“I hit them with the number and told them what it represented,” English said. “It got dead silent in the room. I didn’t expect that. There was a moment of reflection where they seemed to realize that this wasn’t just about a group of people they couldn’t associate with.”

The APS still contributes to STAMP IT! by continually publicizing the project to its members, encouraging them to donate any canceled stamps they receive with their mail.

In 2019, Sloane pitched the idea of creating a “Stamp Out Hate” class at Congregation Beth El’s Hebrew school. The Hebrew school now offers Sloane’s class, an elective aimed at engaging teenagers in Holocaust education and awareness, to seventh through tenth grade students.

In the Stamp Out Hate class, Sloane keeps a massive bin on his desk with thousands of stamps that his students have collected. His favorite part of the job, he said, is his conversations with students.

“This is why God put me on this Earth: to connect with teenagers and to help them learn about the world and themselves,” Sloane said.

Sloane’s students appreciate his lively personality and are diligent in helping collect the stamps. Every Tuesday, the class meets for an hour to discuss the state of the project and the concept of hate itself. His students, Sloane said, always amaze him with their insights and worldview.

The stamps he collects now represent current hate crimes and acts of violence. He collected 11 stamps from one student, for example, to represent the lives taken at the Pittsburgh Tree of Life Synagogue shooting.

Sloane hopes that through his continued collection and his classroom discussions, he can teach his students that hate will always exist and cannot be ignored. He believes he has made a tangible impact on how his students perceive hateful acts in the world, he said.

“Mr. Sloane has really showed me on a personal level what impact the littlest things have,” said Rory Marlin, an eighth grade student at Pyle Middle School and student at Beth El Hebrew School. “I never thought that just bringing in stamps to class could make the world a better place.”

His students appreciate their weekly opportunity to talk about how they can impact the world around them. There is no other place where they can reflect on hate in the world as deeply and personally, Marlin said.

“It’s so easy to get the millions of tragedies and hate crimes confused,” said Daniel Farber, a student of Sloane’s and freshman at Georgetown Day School. “But if you are just holding, say, six stamps to represent the six lives taken in the recent New Jersey deli shooting, then the tragedy suddenly becomes a lot more real.”

At the end of one of Sloane’s recent classes, he sat his students in a circle and made them go around and say one thing that made them passionate. One girl said her pets, one student said family, and nobody was surprised when Sloane said his stamp project. His passion was the driving force for creating the class and spreading awareness, he said.

“You can easily be passionate about the things that make us feel good and happy,” Sloane said. “But what we are doing for the stamp project is impossible to be happy about. It’s so depressing. We shouldn’t have to even do this horrific project, but it needs to be done. We need to be passionate about this.”

Save your cancelled stamps from envelopes, ads, and magazines to contribute to the project.  Address for donations: