Looking back on 2020: what to take away from a difficult year 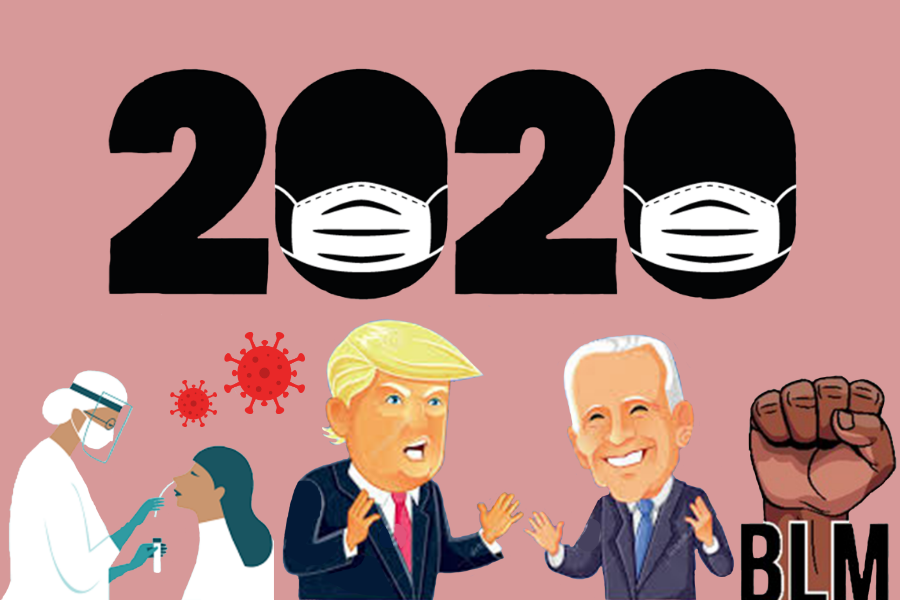 Despite being an unprecedented year filled with suffering and hardships, 2020 has yielded some benefits.

Most people see the new year as an opportunity for a fresh start; it provides us with a “rewinding the clock” mindset. The collective excitement for 2020 was just the same, if not more. We were starting a new decade, leaving the 2010s behind and making long-anticipated jokes about having “2020 vision.”

Of course, 12 months that flew by in a heartbeat, and no one could’ve predicted all that would happen. What we thought was going to be like a High School Musical type of senior year is being spent in our beds. From a once-in-a-century pandemic and wildfires in the West, to a reckoning with racial inequality and police brutality, this year has forced our country to reexamine its shortcomings.

There have been other heartbreaks, too. Individuals whom many adored and respected, including Supreme Court Justice Ruth Bader Ginsburg, actor Chadwick Boseman and basketball legend Kobe Bryant, passed away.

I don’t know if the world will ever forget 2020’s checkered history, and I don’t know if it should. Although this year fueled anger, grief and frustration to unfamiliar heights, it also collectively opened our eyes. Activists have reaffirmed awareness about the looming threats of climate change, and the public is taking a substantive look at systemic racism for the first time in my generation. The past 12 months have been a signal flare urging humanity to take action. Maybe that’s what “2020 vision” really means.

I want to remember the countless societal barriers broken this year, especially in terms of representation.

Kamala Harris secured the Vice Presidency as the daughter of Indian and Jamaican immigrants, Sarah McBride became the country’s first transgender state senator, Mondaire Jones and Ritchie Torres were elected as the first gay Black men to Congress and Iman Jodeh became the first Muslim lawmaker in Colorado — just to name a few. The United States’ government is starting to resemble the people it serves. Such barrier-breaking moments signify a progressive leap forward unlike anything in recent memory.

Furthermore, we are seeing appreciation for oft-forgotten jobs. Healthcare workers are being celebrated and recognized for their efforts; they have been risking their lives since the day the coronavirus pandemic hit. Teaching, long deemed as America’s “most noble profession,” is finally receiving the praise it deserves, as it has provided structure to children in a year without traditional learning. Hopefully, this increased recognition won’t fade through the years.

It’s important to remember that we are lucky to receive an education in such extraordinary circumstances, even though remote learning may be difficult. Millions of students in less fortunate areas have not had this same opportunity. Despite the many horrible aspects of this past year, it’s important to recognize that progress accompanied suffering. 2020 nudged us in the right direction, encouraging us to educate ourselves and others about current events.

As Whitman students, we should encourage those around us to put on their 2020 vision glasses and be a part of the change.