Discovering one second of joy every day in 2020 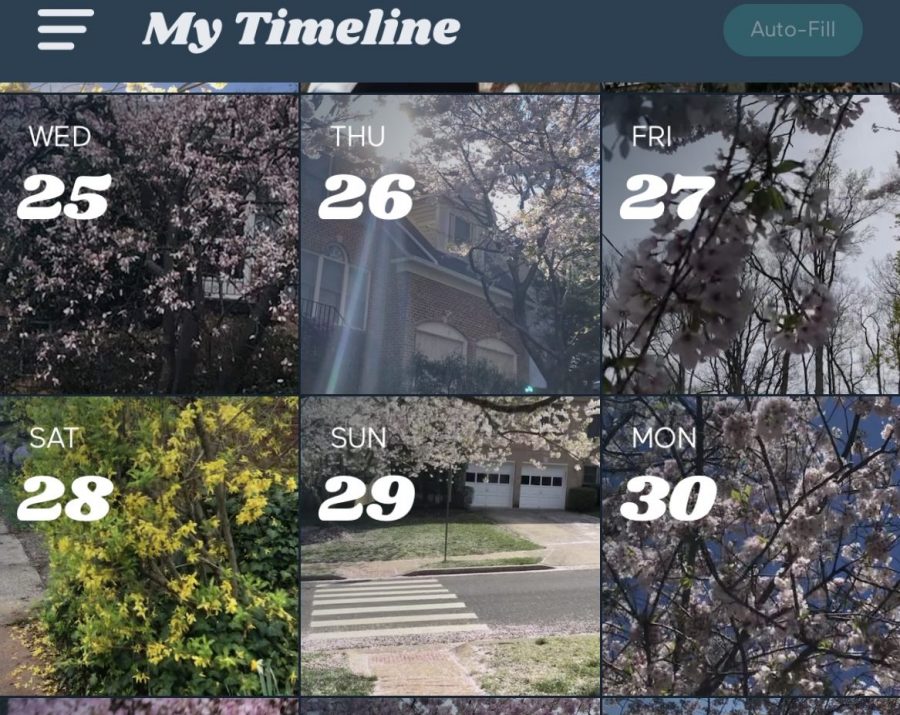 "A screenshot of my 1 Second Everyday timeline from this spring. Upon recognizing that nature could enliven my montage, I took countless clips of vibrant flowers."

A few weeks ago, my friends and I were in the middle of a quintessential teen text conversation about our most frequently used apps. There wasn’t much variation; most of us had named Messenger, Spotify or Instagram, apps one might expect for a high schooler. When I checked my screen time, though, Spotify had the third-place slot and Messenger was the runner-up — coming in at number one was the 1 Second Everyday app.

1 Second Everyday, as the name implies, allows users to film a daily single second-long video clip and compile the recordings into a chronological montage. I downloaded the app after arriving home from a pre-college program at Yale during the summer of 2019. My roommate had sent me the film she made of our time together, and her endearing video instantly piqued my interest.

Within days of first downloading the platform, I became obsessed with creating a virtual time capsule of my own. Reliving my days’ highlights simply by pressing a button on my phone made me beam; it gave me a sense that I was appreciating life to the fullest. But as much as I loved compiling a montage for the last few months of 2019, I was eager to work toward a 365-day long time capsule in 2020.

Throughout January and February, my snapshots captured fulfilling, 1 Second Everyday-worthy experiences. I lobbied at the Maryland General Assembly for gun safety measures; I spent a weekend in Philadelphia competing with the Whitman Speech team; and I visited a variety of restaurants, theaters and shops with family and friends. Throughout each adventure, my camera app was open, and my eyes scanned my surroundings for the days’ filmworthy clips. In those early months, I was soaring, believing that come December, I’d be able to relive what seemed like an incredible year.

And then someone sent me a hand sanitizer meme. I knew it was all over.

Almost as quickly as the pandemic had arrived in Maryland, it seemed, the virus had turned our lives upside down, confining all of us to the monotony of our homes. My hopes of an enthralling 2020 montage had abruptly hit an end, ten months before New Year’s Eve.

In the early stages of the pandemic, I had no idea how to select moments that were interesting enough to be my “one second” of the day. During the initial two-week break from school, I spent most of my time studying for the SAT and my upcoming AP exam, which somehow led me to believe that including pictures of my notes and textbook chapters in my video montage would be a good idea. When I reviewed the first few days of my quarantine montage, I had to shield my eyes. The footage lacked any semblance of the joie de vivre that shone through my pre-pandemic clips. The worst part was that I hadn’t taken any backup videos, meaning that week is forever ingrained as College Board promotion in my 1 Second Everyday timeline.

A few days into the spring, I sat hunched over a math review sheet when an orange speck outside my bedroom window caught my eye. A robin, perched on the cherry blossom tree bordering my house, stared at me.

The contrast between the bird’s radiant body and the tree’s tiny pink buds was striking. I lifted up my phone and snapped a photo.

I had never thought to include nature in my 1 Second Everyday clips, but it didn’t take long for me to add the robin to my montage. I immediately watched my timeline from the beginning of January and found myself glowing at the bird’s finishing appearance. That’s when it hit me — I had been missing out on an abundance of beautiful moments scattered throughout my daily life.

The cherry blossom tree outside my bedroom window was a prime example. Although it blooms every year, I only began to appreciate its presence once I recorded it on video. The picturesque flowers and majestic outstretched branches, suddenly cast to me in a new light, seemed to sparkle with vibrancy. When I walked under the tree one day in April, a gust of wind led petals to cascade down, showering me in pink; I laughed and plunged my camera into the sky.

One particularly magical video from June features a watermelon-pink evening sky with clouds arranged like a smiley face. Vivid sunsets, too, make appearances throughout my montage.

These moments had occurred throughout my life, but it was only when I began recording them for 1 Second Everyday that I fully appreciated the beauty around me — in nature and in other unnoticed parts of my life.

One of my favorite parts of staying at home has been getting to spend more time with my thirteen-year-old brother. Unfortunately, he’s not a fan of starring in my 1 Second Everyday clips. (“Who knows which foreign governments are looking at these things,” he said.) Still, I’ve heightened my awareness on the importance of our moments together, which has helped me treasure our shared day-to-day experiences like discussing current events over breakfast and laughing at the Twitter feeds of politicians whom we dislike.

However silly it may sound, I’ve found 1 Second Everyday success in taking videos of these simple moments with my brother, like going for walks or poring through newspapers together. There are a lot of those clips interspersed throughout my 2020 montage, and watching them reminds me of how lucky I am to spend time with a sibling who I love, and who I enjoy being around. Lots of students aren’t as fortunate as I am in that respect, but I hope that adapting to the pandemic has shed light on how special it is to spend time with people you’re close to, regardless of what your family looks like. It certainly has for me.

This year is almost over, and my annual montage is all but complete. I didn’t get anything close to the time capsule of exhilaration and spontaneity I had hoped to amass, but my video captures a plethora of ordinary beauties I hadn’t noticed before; for a year plagued by a literal plague, that’s more than enough.

I hope that amid the tragedy, chaos, monotony and heartbreak that was 2020, you smiled at a few new beautiful little things. And if not — 2021 is just a few days away.