The Black and White • December 13, 2020 • https://theblackandwhite.net/68594/opinion/blogs/my-experience-escaping-the-conservative-media-rabbit-hole/ 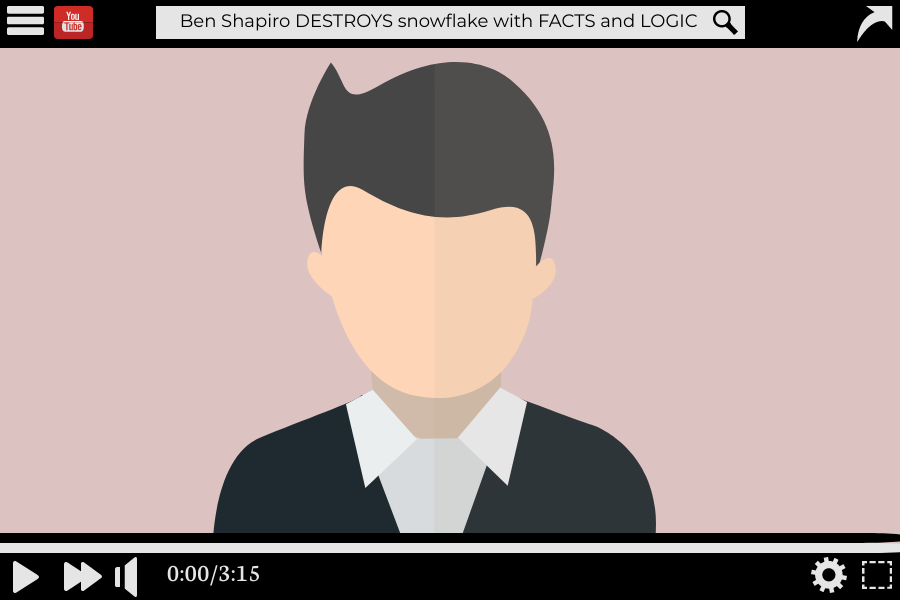 It's extremely easy to be sucked into a never ending cycle of persuasive, conservative media.

My childhood was dominated by a one-party political system: the Democratic party. For the first twelve years of my life, my parents, my friends and my friends’ parents were all Democrats, and I didn’t think to disagree with their positions. That all changed in middle school when I got a cell phone, and for the first time in my life, unlimited access to the internet.

I fully immersed myself in this newfound online universe. There was no one to stop me from exploring. It wasn’t long before my YouTube feed began to recommend conservative commentators like Ben Shapiro and Steven Crowder. They spoke quickly and knew their statistics, which made my middle school self feel like a politico. These conservative media outlets provided a radical new way of looking at the world, seemingly just as rational as the liberal perspective I had grown up in.

Despite being a stalwart liberal, conservative marketing reeled me in. If the Youtube thumbnails put the word “Republican” on the screen, all kinds of mental red flags would have been raised; but these channels are smarter than that. Instead, pundits presented themselves as rational intellectuals who had some moral obligation to obliterate “triggered snowflakes.” They could not be placed into a box; they were of a higher order than the realm of politics, and I felt obligated to watch.

These videos melded entertainment and politics; I could laugh at the public insanity of so-called “social justice warriors” — a negative term used by the online right to describe politically correct leftist — while forming political opinions of my own.

Middle school is not a time many want to remember. It’s an awkward place in a person’s development where they start constructing their own identity. For me, that meant diving deep into conservative media as a way of rebelling against my Democrat parents.

As I began to tumble down the right-wing rabbit hole, I started to believe that I belonged to an exclusive club of level headed and like-minded intellectuals whose singular metanarrative accounted for all the complexities of the world.

Feminism? Nothing more than blue-haired SJWs wanting special privileges. Social programs? Government handouts for people too lazy to sustain themselves. Mainstream media? Sensational entertainment for sheep who couldn’t form their own opinions.

I pretended to base my politics in facts and logic, but the truth is that my views became reactionary and emotional.

I started making increasingly edgy and racy jokes with my friends, and if someone were to call us out on it, we labeled them sensitive. Even the apolitical entertainment I watched strengthened this new attitude, namely the YouTuber PewDiePie and his racist crusade against an Indian media company.

I was trapped inside a positive feedback loop of opinions, anger and outrage, and I was not alone.

According to a 2018 report by Data & Society, conservative “alternative influence” channels use networking, guest appearances and outrage politics to sell a common “counter-cultural” identity to a youth demographic. Through just a few hyperlinked videos, mainstream conservative influences such as Charlie Kirk can lead their audiences to the words of neo-Nazis such as Richard Spencer. This has led wide swaths of mostly white, adolescent boys to become indoctrinated into alt-right ideas of scientific racism and conspiracy theories surrounding the supposed destruction of western civilization.

The secret to my great escape was curiosity — not about politics, but about art.

This curiosity was initiated in school, when I found that required reading such as Lord of the Flies and Animal Farm interested me independently of the grade that depended on them. These books, and numerous other school materials, propelled me to consume as much literature, cinema and music as possible. If I was exposed to conservative media inside the classroom as well as outside, I don’t know how far down the rabbit hole I would have gone.

Instead, I was eager to understand the perspectives and messages of the arts, many of which seemed to contradict the spoon-fed conservatism of Youtube algorithms.

When I fell in love with Danny Brown’s raps and Ben Shapiro claimed it wasn’t legitimate music, I raised an eyebrow. When I watched American Beauty, I wondered how its scathing critique of capitalism and the American dream fit in line with Dennis Prager’s laissez-faire economics. After watching hours of author David Foster Wallace analyzing our postmodern society, I started to doubt Jordan Peterson’s argument comparing it to marxism. My media bubble had burst.

Today, I still consume conservative media, but I feel confident about my ability to refute and dissect it. I balance out each Ben Shapiro video I watch with at least two refuting his arguments. I am thankful for having a personal experience with conservative ideas, but at the same time, I am afraid of the part of my generation falling so deep down the rabbit hole they can’t see the light anymore. The deeper one goes into the nicely packaged, singular perspective of conservative media, the harder it is to dig out of it.

After going from a liberal to a conservative to a leftist, I know firsthand that you have to face people with whom you disagree head-on and without a chip on your shoulder. Sometimes politics is personal, sometimes it’s messy and sometimes it demands strong emotions, but if you can’t empathize with your enemies, you will never be able to have productive and critical conversations that evolve your understanding of the world.

Frankly, the world is too complicated for any single person to understand. Each individual has a unique voice that holds its own validity. By punching down at those that have it worse, or dismissing those with whom you don’t agree, you only box yourself in an echo chamber of ignorance. Compilation videos and soundbites are effective at quickly reinforcing pre-existing viewpoints, but they rarely stop to consider the other side. If we strive to be more compassionate to everyone, I can’t help but feel that it would be reflected in our politics.