‘Is 2020 ending on a good note?’: Students react to election results 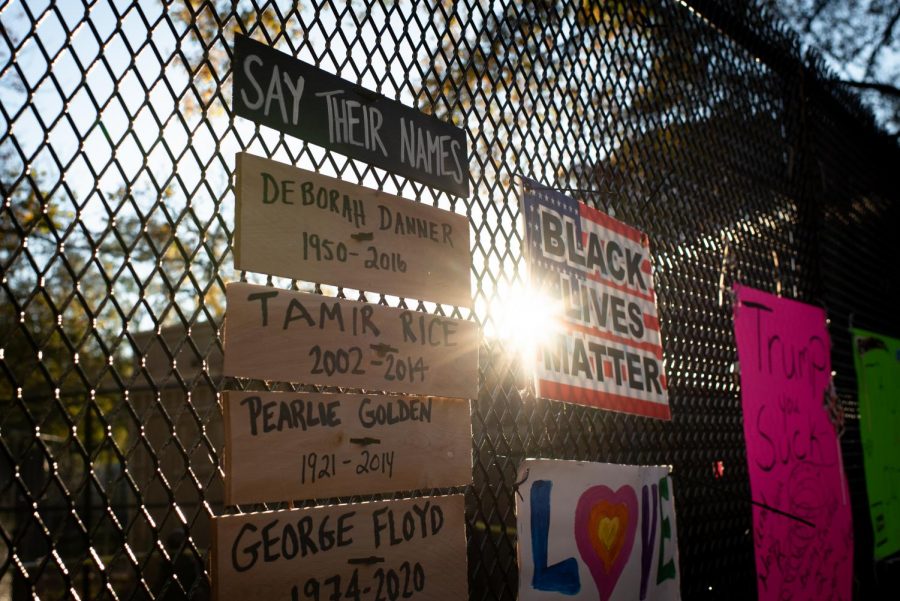 Signs hung by Biden supporters in front of the White House.

“Cupid Shuffle” blared on speakers all over Washington, D.C. while President-elect Joe Biden’s supporters flooded the streets outside the White House, celebrating the Democratic candidate’s win over incumbent President Donald Trump Nov. 7. At the same time, flocks of Trump supporters arrived to protest.

“To the left, to the left, NOT to the right,” Biden supporters joked as they danced in front of the White House, waving Black Lives Matter and LGBTQ+ pride flags and sporting shirts that read “Bye-DON” and “Ridin’ with Biden.”

Junior Sahana Ashley drove into the city to join the festivities, being careful to take COVID-19 safety precautions while celebrating Biden’s win.

“The energy was amazing,” Ashley said. “We were all just chanting and dancing in front of the White House.”

Although many liberals celebrated Biden’s win, some view the president-elect as the lesser of two evils. These voters are part of a movement called “Settle for Biden,” which emphasizes that while Biden was not their first choice candidate, liberals should prefer him over President Trump. Senior Satine Diouf identifies with this movement.

“Biden has a threatening record of misogyny, supporting the Iraqi war and also racism,” Diouf said. “But when you put him next to Trump, Biden is by far the best candidate.”

Some students also condemn Vice President-elect Kamala Harris for her record as a police prosecutor who focused on drug charges. Still, most recognize the widespread appeal in the fact that she will become the first woman, first person of South Asian descent and first Black person to serve as vice president. Diouf added that Harris’ identity as a Black and Asian woman provides representation for all women of color, who are rarely seen in high governmental positions in the U.S.

“Even though Kamala Harris has an imperfect past, it’s important to acknowledge how hard she had to work to get to where she is today,” she said.

Throughout the month of September, the Black & White surveyed over 170 seniors about their opinions regarding the 2020 presidential election and the political issues that matter most to them.

The survey revealed that while only 75% of those surveyed identify as Democrats, 89% were dissatisfied with Donald Trump’s presidency. This election, the youth voter turnout greatly surpassed the turnout in the 2016 presidential election.

Senior William MacDonald hoped for President Trump to secure a second term, and was disappointed by the outcome. However, he has accepted the Republican loss.

“I wish Trump could keep his mouth shut and keep it professional,” MacDonald said. “But it’s not the end of the world and people on both sides just need to relax.”

Because she’s not yet 18, sophomore Amira Tohan could not vote. However, she and her family watched the results pour in on live television over the duration of the election.

“I was surprised that Trump lost some swing states because Republicans were really confident he would win Pennsylvania and Georgia,” she said. “This election has been stressful, but more so interesting.”

Unlike most recent American presidential elections, news outlets did not project a winner on election night. Record numbers of voters cast mail-in ballots to prevent possible exposure to COVID-19 at in-person polling sites. As poll workers counted ballots in the historic swing states of Pennsylvania, Georgia and Nevada, many students obsessed over checking result updates and calculating how many votes each candidate needed to secure a win.

“I probably had CNN playing in the background all day,” Ashley said. “Even when I was sleeping I occasionally set alarms to wake up during the night when we were waiting on crucial swing states.”

Although Biden is now officially the president-elect, President Trump and some of his supporters are making unsubstantiated claims of alleged voter fraud.

“I believe that there was voter fraud involved because some poll watchers were not allowed to be near the people counting votes in swing states,” Tohan said. “But Trump should concede the election because there hasn’t been any solid evidence presented yet.”

Others, like senior Nikki Widra, disagree with voter fraud claims, citing the validity of mail-in ballots. Though President Trump has claimed that mail-in votes are rigged — in large part because absentee ballots are overwhelmingly cast in favor of Democratic candidates — Biden has been the only candidate directly encouraging his supporters to vote through mail.

“He’s just a sore loser,” Widra said. “There’s no lick of evidence of fraud being committed.”

The Trump administration is continuing to pursue legal challenges against the result of the election, but the lack of evidence has dimmed these efforts.

Widra, who voted for the first time this year, was proud to receive an “I voted” sticker after handing in her ballot.

“I still have the sticker on my jean jacket,” she said. “It’s sort of like people putting pins on their backpacks to voice their political opinions to strangers on the street.”

2020 will be a year for the history books, consisting of wildfires due to climate change, a national backlash against police brutality and a worldwide pandemic. The outcome of the election also weighed heavily on many, exacerbating the polarization between Democrats and Republicans. Though President Trump is still searching for a way to overturn the results of the election, Biden and Harris, who are already taking their first steps in transitioning to a new administration, are expected to sign several executive orders to reverse a number of President Trump’s policies.

“Unlike Donald Trump, I expect Joe Biden to fight for equal rights for all marginalized communities, healthcare, police brutality, and so much more,” Diouf said. “I hope he keeps his promises.”