The Black and White • December 1, 2020 • https://theblackandwhite.net/68543/sports/athletes-disagree-over-mpssaa-sports-season-scheduling/ 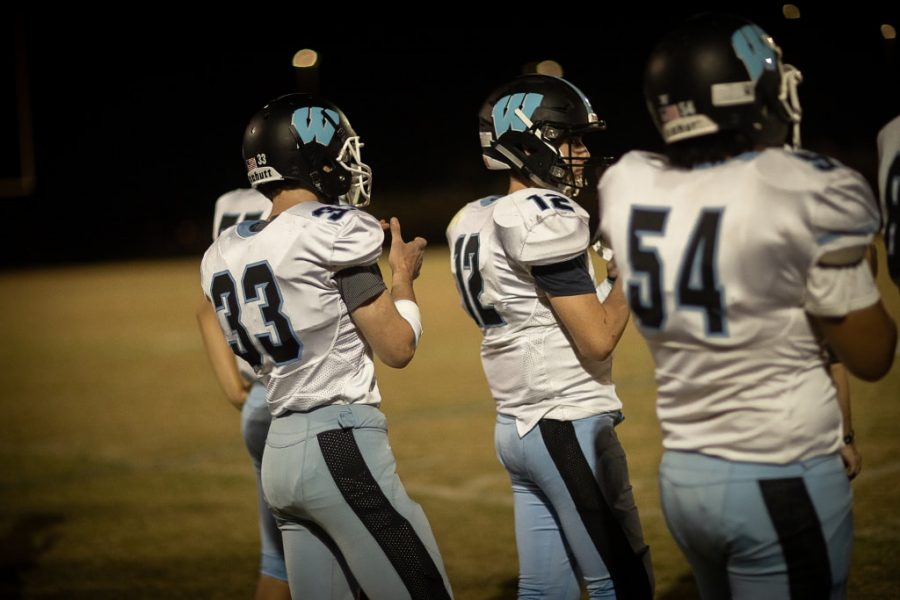 (From left to right) Harry Sikes (‘20), Senior Ben Treacy and Chris Yeo (‘20) prepare to take the field during a football game last fall. This years' football season is scheduled to start on February 13.

Comradery, commitment and memories that will last a lifetime — all reasons why high school sports hold a special place in the hearts of many athletes across the country. When the coronavirus pandemic hit, MCPS initially postponed athletics for two weeks, and later for the rest of the year.

“It was really upsetting to have the season gone right after it started,” said sophomore softball player Alanna Singer. “I’ll never get that season back.”

As COVID-19 cases continued to rise across the nation, local athletes and coaches were left wondering if there would be sports during the 2020-21 school year. On October 26, the Maryland Public Secondary Schools Athletic Association announced its plan for reintroducing high school sports. The winter season is set to begin December 7; the fall season will start on February 13, and the spring season on April 17, evoking mixed reactions from the student body.

Junior Alex Weinstein played JV basketball last year and was looking forward to getting back on the court; but with the close contact required in most sports, he doesn’t see how athletes can remain safe while playing.

“As much as I would love to play my sport at Whitman this year, we should not have a season,” Weinstein said. “The safety of everyone is more important than sports.”

Despite the risks associated with in-person sports, many student athletes are still looking to get back on the field. For senior football player Ben Treacy, there’s no better feeling than playing alongside his teammates, he said.

“We need to have high school sports return this year,” Treacy said. “Our seniors have one last opportunity to play the sport they love with their friends one last time.”

Some students who were hoping for a full season are dissatisfied with the county’s plan — especially athletes whose sports are traditionally held over the spring season.

When MCPS cancelled the 2019-20 spring season, fall and winter sports teams had already completed their seasons — including playoffs — before the pandemic put a halt to athletics. The county’s plan designates equal amounts of time for each sports season, which some spring athletes find unfair.

“When everything started to get canceled, we were all devastated,” said junior lacrosse player Grace Adkins. “I’ll be disappointed if our season gets cut short for the second year in a row. There’s no point in a varsity season without playoffs.”

Spring athletes may also have to decide between playing with either their high school or club team this upcoming season. Due to pandemic-related restrictions, the spring season could extend into the end of the school year and potentially even the summer, when club leagues typically take place.

Despite having to weigh these two options, some athletes see high school athletics as the clear choice.

“While most of our recruiting is done through club summer tournaments, the high school season just means too much,” said junior lacrosse player Evan Shavitz. “When you’re working hard every day and giving 100 percent to a group, it’s impossible to leave or miss any of that.”