The Black and White • November 30, 2020 • https://theblackandwhite.net/68538/news/power-outages-leave-students-in-the-dark-cause-absences-connectivity-issues/ 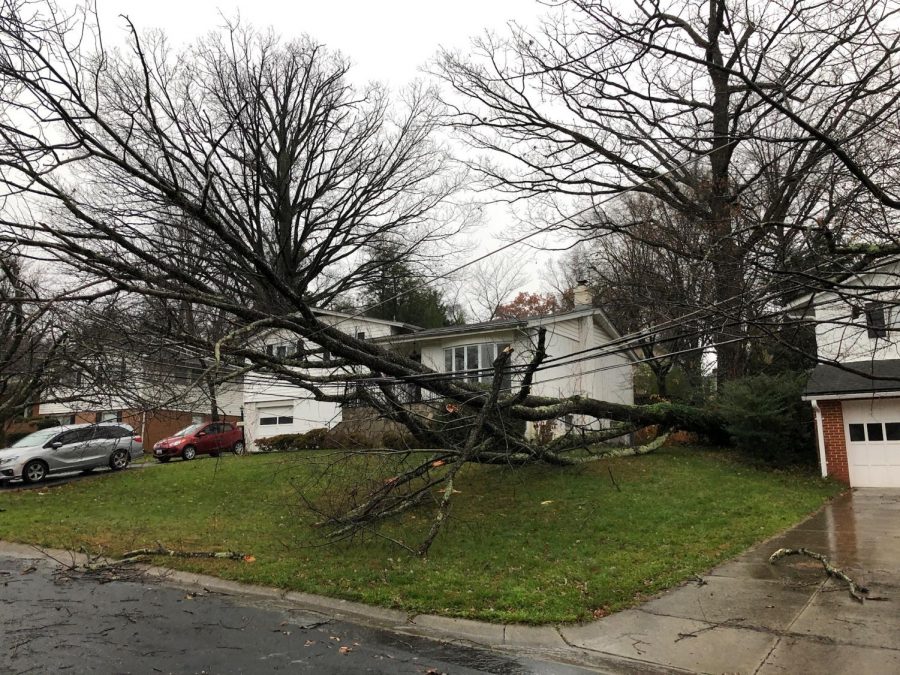 A tree crashed into utility poles across the street from junior Peter Silvia's home this morning, causing Silvia and many other students to lose power and miss class.

A number of students were unable to connect to their online classes this morning due to widespread power outages in the Whitman area. According to attendance secretary Tabitha Davis, 631 students reported electricity issues by the end of the school day.

After a morning of heavy storms, there were 17 active power outages in the Washington D.C. area as of 12 p.m. on Monday, according to local power provider Pepco.

Almost 900 Pepco customers in Montgomery County experienced a power outage as of 11 a.m.

Though many students managed to quickly get back online, some said the outages were an example of the unique challenges that virtual learning poses.

Sophomore Sydney Mendenhall and her family were among those affected by the outages. Mendenhall lives in Pineview, a neighborhood close to Pyle Middle School, and missed her entire second period after losing power and internet connection shortly before 10:15 a.m.

“I’m slightly annoyed by the situation, especially since I have a test in my class soon,” Mendenhall said. “A class is always more engaging when it’s in real time.”

Mendenhall plans to watch a recording of the day’s instruction to make up for her absence.

“I was confused at first,” Lin said. “It was shocking to me because power outages don’t really happen often.”

Lin’s biology teacher, Kelly Garton, said he allowed Lin and several other disconnected students to make up their classwork, noting that his students are “at the mercy of technology.”

Senior Eloise Richart, who lives close to Whitman, lost power shortly before second period. Richart lost about six minutes of class due to glitches but wasn’t particularly worried about the missed time. While her computer lost connectivity, Richart used her phone to tell the teacher about her issues by texting a friend in class, she said.

For junior Peter Silvia, the “excitement” wasn’t complete without a neighborhood visit from the fire department, he said.

Silvia lives off of Wilson Lane, a short drive from Whitman. At about 10:10 a.m., Silvia was logging onto his Honors Physics class when he heard a crash.

“I looked out the window, and I saw a tree dangling across a wire,” Silvia said. “I was like, ‘Okay, this is going to be a situation where I’m not going to have power for a while.’”

A tree had crashed into a utility pole across the street, causing Silvia’s house to lose internet connection. The damage to several poles’ wires was so severe that fire trucks closed off his street.

Silvia was with his dad and brother, and the three immediately rushed to Silvia’s dad’s office in Northwest D.C. While in the car, Silvia used his phone to connect to the last 30 minutes of his physics class; later, he participated in his two afternoon classes from his father’s office.

Though Silvia’s house didn’t regain power until about 8:30 p.m., he feels thankful that he was able to easily relocate to a location with WiFi, he said.

“I had the ability to go to my dad’s office and do this,” Silvia said. “Some people might not have been able to.”

Like Silvia, senior Abbie Hall expressed gratitude for circumstances that allowed her to adapt to her loss of connectivity.

Hall, who lives in the South Bradley Hills neighborhood, lost power shortly before her second period AP World History class. At first Hall used her phone’s hotspot to connect to class, but she soon recognized this couldn’t be a permanent solution due to her battery rapidly draining.

This brought Hall to text senior Cayla Joftus. After second period, Hall slipped a mask on and drove a short distance to Joftus’ house, where she successfully connected to her third and fourth period classes.

“I was super lucky,” Hall said. “It definitely exemplifies the inequality of a natural occurrence happening, and how they can disproportionately affect other people.”

Hall and Joftus had to wear masks while on Zoom in their afternoon classes, but Joftus said it was worth it to help her friend.

Although this morning’s blackouts didn’t last long, missing class due to power outages is one of many new challenges that accompany virtual learning, Lin said.

“I think it’s definitely like a ‘new snow day’ thing,” Lin said. “If it happens once or twice it’s okay, but if it happens for a really long time, there definitely needs to be something done about it.”