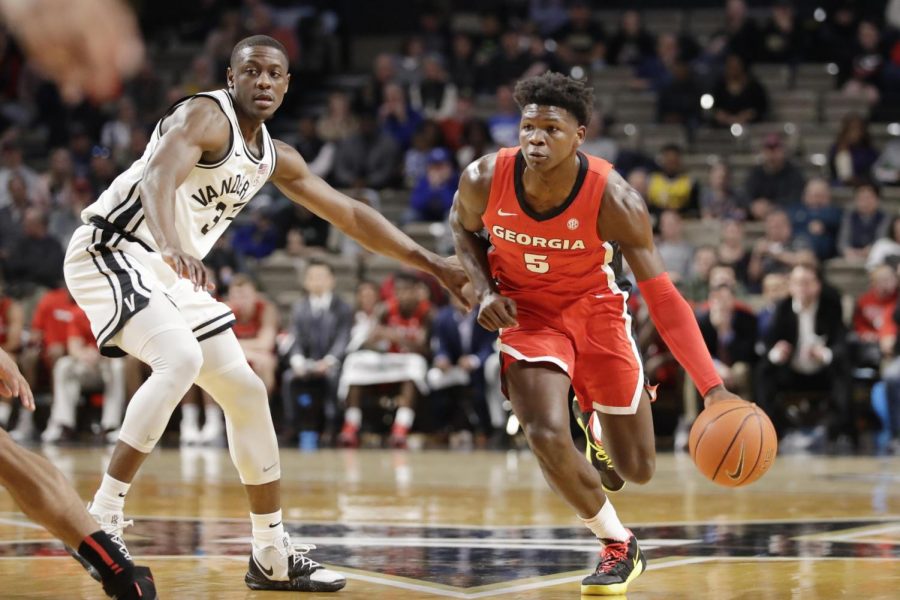 The 2020 NBA Draft will take place over a conference call on November 18 at 7 p.m. The Minnesota Timberwolves will have the first overall pick for the second time in franchise history.

This draft will be unusual: there’s no consensus top pick and teams haven’t been able to meet with prospects in person as a result of the coronavirus pandemic. This means that teams might have vastly different scouting reports on the 2020 draft class, so don’t be surprised if an underdog like Deni Avdija or Obi Toppin sneaks into the top three, or if the Timberwolves or the Warriors trade out of their high selections to acquire players that will help them contend for a title now.

Without further ado, here are The Black & White’s first ten mock selections in the 2020 NBA Draft:

Ranked as one of the top prospects in the Class of 2019 ESPN 100 rankings, Anthony Edwards exceeded expectations during his freshman season at the University of Georgia. With star point guard D’Angelo Russell by his side, the Timberwolves would have a deadly set of guards. Edwards’s rare combination of size and robust athleticism will allow him to compete with the best of the best. However, Edwards’ weaknesses include his lack of defensive effort and frequent turnovers on offense. Edwards also has faced criticism for appearing more concerned with his individual performance than his team’s in college.

The Warriors’ lineup has been missing an All-Star caliber center, even when they won the NBA Championship in 2015, 2017 and 2018. If the Warriors are unable to maneuver a trade for an elite veteran, they should bank on Wiseman’s potential to be their starting center for years to come. At Memphis, Wiseman played strong defense, averaging 10.7 rebounds and 3.0 blocks per game. On offense, he proved to be a fantastic alley-oop finisher and showed sky-high potential running pick and rolls. However, Wiseman only played three games of college basketball before his season shut down due to a NCAA rules violation, so NBA teams don’t have much film to work with. During those three games (and in high school, too), Wiseman struggled to stay in front of ball handlers and often bit on pump fakes. On offense, he’s a limited ball handler and has yet to prove he can consistently make jump shots outside of the paint.

Averaging 16.2 points, 8.6 rebounds, and 2.7 blocks per game, Okongwu made a name for himself as a true big man who can play well on both offense and defense. Okongwu will fit perfectly with the Hornets’ attempt to build up their lacking defense. A 7’1’’ wingspan combined with his stellar leaping ability make Okongwu unstoppable in the paint on offense and a quality rim protector on defense, and his rebounding ability sets him apart from other bigs in the draft. Despite these skills, Okongwu is a poor outside shooter, making only 25 percent of his shots from the three point line last season. His poor ball-handling skills also make him turnover prone.

If there’s one player to know in this draft class, it’s LaMelo. With boisterous Lavar Ball as his father and starting New Orleans Pelicans guard Lonzo Ball as his older brother, LaMelo has been under the spotlight since his freshman year of high school. LaMelo’s excellent playmaking and leadership skills will make him a great fit for a Bulls team craving a point guard. His professional experience from playing in Australia’s  National Basketball League gives him an upper hand over other players in the draft who come straight from college. LaMelo’s major weakness is overconfidence. He was known for taking half-court shots and making flashy passes in high school, but that effortless playstyle won’t work against NBA defenses.

The Wizards are likely to trade up this draft; they desperately need a more talented player than whoever would be available at their current pick (ninth). At the fifth pick, Obi Toppin, who dominated college hoops this year, would be a fantastic option for the Wizards. The 2020 NCAA player of the year is a strong player whose crazy dunks made him a human highlight reel. The Wizards backcourt would take advantage of Toppin’s excellent pick and roll play to get him into the paint. Toppin has very high hips, making him stiff on defense and limiting his quickness on offense. Teams may be concerned that Toppin has already reached his full potential, entering the draft at 22 years old.

Several reports have indicated that Hawks management has the coaching staff on a short leash to reach the playoffs this upcoming season. While that would likely be a mistake considering how young and raw Atlanta’s roster is, Avdija would certainly help the Hawks push for a surprise playoff spot. Avdija is an extremely versatile player on both offense and defense and would give Trae Young much needed defensive help as well as a second scoring option. The Israeli League MVP  has the playmaking skills of a point guard and is a great defender. He is a skilled ball handler and often finds open teammates for easy buckets. On defense, Avdija’s ability to rotate and disrupt offenses made him a valuable asset. Shooting is easily Avdija’s greatest weakness—he shot only 28 percent from three and a putrid 55.6 percent from the free throw line last season. For reference, Andre Drummond, one of the worst free throw shooters in the NBA last year, shot 57.5 percent from the free throw line last season. If Avdija wants to succeed in the NBA, he has to improve his shooting numbers.

Halliburton’s incredible playmaking skills along with a respectable defensive reputation will certainly give Pistons fans something to cheer about, considering how devoid of talent their roster is. His combined passing, ball handling and shooting abilities skyrocketed his draft stock over the last calendar year. However, Haliburton has an unusual release on his jump shot, which he needs to fix in order for him to shoot contested and off-the-dribble jumpers. His slim 6’8”, 175 pound frame proved to be a disadvantage last year, as he was often knocked around on drives to the basket, causing him to settle for tougher layups and floaters instead.

French professional player Killian Hayes showed lots of promise playing for Ratiopharm Ulm of the German Basketball Bundesliga this past year. Hayes would be a beneficial pickup for the Knicks who have had trouble developing other guards in recent years. Averaging 6.2 assists per game, his playmaking ability and great vision will make him an instant leader. Hayes’ offensive game is very smooth; he plays similarly to D’Angelo Russell and Luka Doncic, shooting well from anywhere on the court. Hayes is very left-handed, and he seems very uncomfortable dribbling and shooting with his right. This makes Hayes predictable on offense and prone to turnovers. He also lacks strength, forcing him to play outside of the paint.

Unsatisfied with their options at the fifth pick, the Cavaliers might make a trade with the Wizards to land them an extra 2020 pick and Troy Brown Jr. Although Cleveland already has a promising young backcourt with Collin Sexton and Darius Garland, Okoro is a sensible pick because of the defensive prowess he can provide for a Cavaliers squad who finished dead last in defensive efficiency last season. Okoro’s combination of strength and intelligence made him one of the premier on ball defenders in the Southeastern Conference. On offense, he’s a solid finisher and unafraid of contact, which often got him to the free throw line multiple times per game at Auburn. In fact, Okoro shot two or more free throws in 22/28 games last season. However, his offensive tool bag is very limited, and he struggles to create scoring opportunities in isolation situations. Okoro’s shooting is also a concern—he shot just 29 percent from three and 67 percent from the free throw line last season. Those stats must improve in order for him to provide meaningful value on offense.

With the acquisition of Chris Paul, the Suns have made their intentions of pursuing a playoff berth clear. Now that they have a point guard who can take some of the scoring burden off of Devin Booker, the Suns might look for a forward who can have an immediate impact on both offense and defense to fill Kelly Oubre Jr.’s role. Vassell certainly fits the description. His solid three point shooting (41.7% career three point percentage) and off ball scoring made him a solid offensive option at Florida State. On defense, Vassell uses his 6’10 wingspan effectively to block shots and deflect passes. He moves his feet well and has an above average defensive IQ, always seeming to know when and where to rotate. However, the core of Vassell’s offensive game centered around spot up shooting and straight drives to the basket. If he wants to be a consistent offensive threat, Vassell will have to keep improving his ball handling. Vassell’s physique has also been a point of concern throughout his college career. At 6’7, being only 194 pounds made him a liability to finish through contact on offense and guard bigger wings and forwards on defense.

The best players remaining on the board after these top ten picks would be Florida State forward Patrick Williams, Vanderbilt guard Aaron Nesmith, Villanova forward Saddiq Bey and Alabama guard Kira Lewis Jr. It will be interesting to see how teams evaluate these prospects; we will just have to see how the night unfolds.