The Black and White • November 3, 2020 • https://theblackandwhite.net/68279/feature/diving-into-the-sports-industry-with-junior-zach-yaqub/

Diving into the sports industry with junior Zach Yaqub 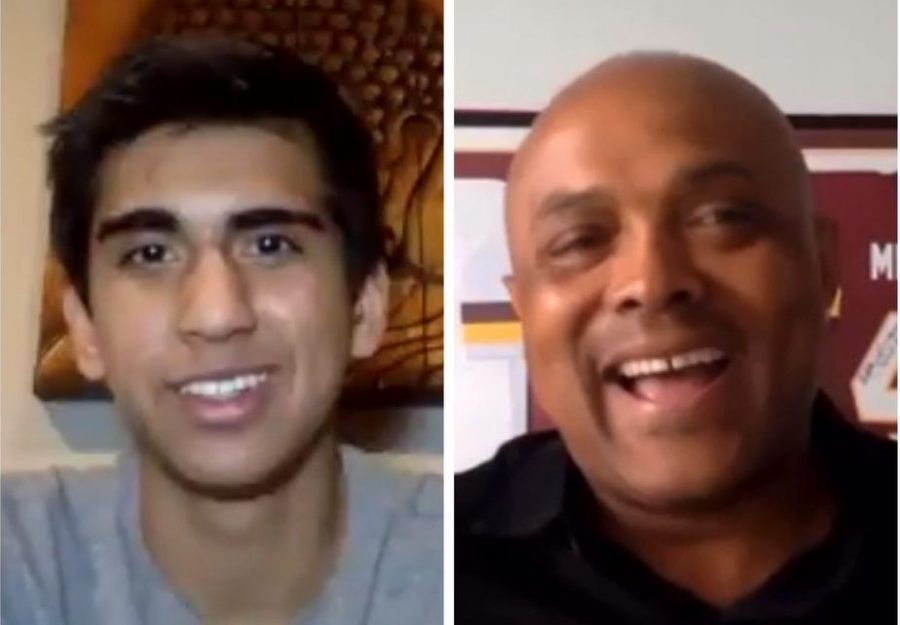 At 5 p.m. on a Saturday afternoon, most high school juniors would take a nap or finish their homework, but Zach Yaqub has other priorities. After an exhausting, day-long baseball tournament in Virginia, he opens up his laptop and starts researching potential interviewees for his sports website and Youtube channel.

“I never get bored of it,” Yaqub said. “Each person brings tips and unique perspectives.”

Yaqub started “How To Get A Job In Sports” in March, a website which aims to enlighten his audience on the often overlooked jobs available in the sports industry. Students tend to perceive the industry as limited to athletes and agents, when in reality there are thousands of other options, Yaqub said.

“Kids like me can learn about jobs in sports, see what interests them and learn how to get the job,” Yaqub said. “I think that interests a lot of people, I know it would interest me.”

Yaqub interviews sports professionals about how to get a job in sports, then posts these interviews to his Youtube channel: “Interviews with Zach Yaqub.” He has talked with multiple notable professionals from the D.C. area, including Washington football legend Brian Mitchell, host of the Nats Xtra broadcast Dan Kolko, sports broadcaster and current voice of the Washington Nationals Dave Jageler, and Brett Baur, Monumental Sports VP of Global Partnership.

“This is a great initiative he’s doing,” Baur said. “And it’s providing a lot of insight and education to a lot of people his age and frankly people older than him.”

Yaqub contacts professionals through the networking website, LinkedIn, and then messages them to set up a Zoom interview. Each person Yaqub talks to provides a reference in the sports community for his next potential interview.

“Most people I interview are kind enough to recommend me to others,” Yaqub said. “One interview can end up leading to five more. It’s like a domino effect.”

Since starting his channel in June, Yaqub has become more proficient in picking the brains of leaders in the sports world. He initially struggled to keep the conversation on track and would simply read through his list of prepared questions. Now, he lets his guests lead the conversation and chooses his questions based on the information they provide.

“The more interviews I have under my belt, the less I have had to prepare,” Yaqub said. “I have learned to come up with questions on the fly and just be more fluid and relaxed.”

Yaqub has also started compiling a list of tips on pursuing a career in sports, many of which he learned from his interviewees. The most crucial factors in getting hired are connections and actual achievement, he said.

“It’s not what you know; it’s who you know,” he said. “Connections are everything, and how you build connections is by reaching out to people and genuinely trying to learn something from them.”

He also warns his audience that most entry-level positions aren’t exactly glamorous, but they’re still an important starting point for anyone who wants to pursue a sports career.

“Some of the most well-respected people in sports started off as the front desk worker or even the mascot,” Yaqub said.

Yaqub has always wanted to pursue a career in sports himself, but he previously struggled to find guidance on how to achieve this goal. His interest became a launching point for his website and Youtube channel, Yaqub said. His interviews and research have helped him become better equipped to pursue his dream job: working as the general manager of a MLB team.

“While you may not be out on the field, you still have an impact on the game,” Yaqub said. “You still get that thrill of competition.”

Zach’s greatest inspiration is his older brother Zain Yaqub (‘18), who played Whitman football all four years in high school. He is currently a sophomore at Indiana University. Like his brother, Zain currently runs an organization named “Smart Media Management,” which generates leads for home remodeling companies. Zain is also the founder of “Bethesda Entrepreneurship Academy,” a program where teenagers can learn from current founders and CEOs of businesses about how they created their own companies and lessons they have learned along the way.

“My brother Zain has been an inspiration to me and many kids,” Yaqub said. “He has taught me a lot of the skills I use in my interviews. I am so lucky to have him in my corner — he has been an incredible helping hand in this complicated process.”

Zach’s work transcends the sports world; it’s now being repurposed to aid community members in their daily lives. He sends his videos to the Greentree Homeless Shelter, hoping for people of all ages to watch and learn helpful tips to get them back on their feet, he said.

“I’m very proud of Zach; he’s done a great job, and I think he’s helping a lot of other kids learn how to get a job in sports,” Zain said. “He’s always been very ambitious and works hard every day.”

Yaqub doesn’t plan on stopping “How To Get A Job In Sports” or “Interviews With Zach Yaqub” any time soon.

“I’m looking forward to the future of the channel and all the people that will be positively impacted from my videos,” he said. “If I can be a small part in a kid learning about a job that they end up pursuing as a career, I will have achieved my goal with this whole project.”