The Black and White • October 26, 2020 • https://theblackandwhite.net/68247/opinion/the-boundary-analysis-is-only-the-first-step-mcps-must-continue-to-promote-diversity/

The boundary analysis is only the first step: MCPS must continue to promote diversity 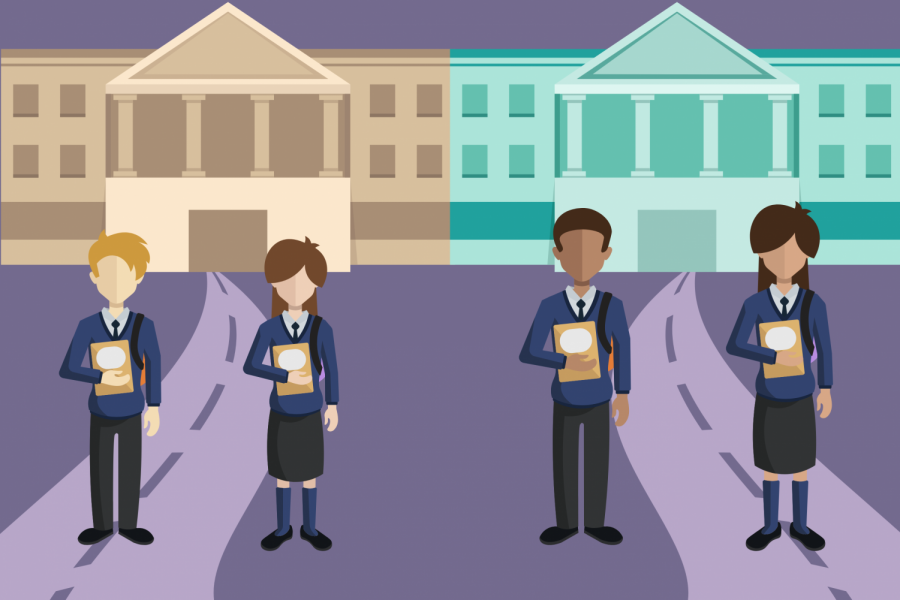 MCPS should strive to create student gatherings that promote diversity.

Whether it was the echoing stomps of a step dance team or the smooth moves of salsa dancers, hundreds of black and brown hands clapped for every act that took the stage. Students and teachers alike jumped up and down as music blared from the loudspeakers, and cheers echoed off the auditorium walls. The excitement was palpable.

This was the scene at the annual Minority Scholars Program retreat at Quince Orchard High School last March. There, students from across Montgomery County gathered to celebrate diversity, build community and discuss solutions to combat countywide racism. More than anything, it was an opportunity for me to meet kids from other, more diverse schools and learn about their cultures, backgrounds and the issues facing their communities.

Whitman is the whitest school in a majority-minority county — white students make up 67% of the school’s student body. At the county level however, the student population is only 27.7% white. Diversity has recently become a more prominent issue in Montgomery County; it’s one of the main reasons why the school board authorized an independent investigation and analysis into current school boundaries earlier in January.

The boundary study was long overdue and the changes that stem from it will help diversify schools. But the fight for inclusion in our school system cannot stop there.

At the Quince Orchard retreat, students of different races and ethnicities were able to interact and learn from each other—a stark contrast from the predominantly white, empathy-lacking environment at Whitman.

Events like the MSP retreat don’t have to be restricted to after-school activities. By creating town halls or events similar to the last March’s event, students can learn from a diverse group of peers, one not restricted by their own school’s bubble. Gaining a greater cultural understanding benefits everyone; not only does it aid students in cognitive learning, but it also better prepares them to enter the world after academics.

“The retreat was really eye-opening, especially coming from a school with such little diversity,” sophomore Leyla Virk said. “It was a big contrast to Whitman.”

There are some schools in MCPS that properly reflect the county’s diversity. Take Albert Einstein High School in Southeast Montgomery County, which has a 48.5% Hispanic, 22.4% white and 17.7% Black population make-up. Or look at Clarksburg, with a 30.1% Black student body, and Watkins Mill, which has a majority Hispanic population. An abundance of cultural backgrounds in one area makes academic melting pots for learning. Students have the chance to be exposed to new perspectives by bridging the divides within schools. The county should strive to forge these connections and dismantle one-dimensional learning spaces dominated by a single ethnic group.

Much less of a county focus but equally as important is integration within schools themselves. Even if a school has a diverse student body, that doesn’t automatically translate to an equitable learning environment; some classes may not reflect their overall diversity. The student bodies of more advanced courses tend to be racially disproportionate. In MCPS, only 36.2% of Hispanic students are in AP or IB classes, while the percentage of Asian and white students is much higher, at 74.4% and 67.1%, respectively. Not only do we need to diversify the schools themselves, but also the programs that disadvantage certain races.

“You can see the segregation within each school’s program,” said Einstein senior Avery Smedley. “If you were to walk into an AP or IB class, you would think the school is majority white, but it’s majority Hispanic.”

Some opponents of further school integration may argue that MCPS has already promoted diversity efforts by conducting the analysis in the first place — so why go further?

Although the boundary analysis is a progressive first step in promoting equity, it isn’t nearly enough to advocate for tolerance.

“The final report isn’t going to tell you anything you don’t know,” said Sunil Dasgupta, a candidate for the at-large seat on the Board of Education.

So far, the interim analysis has only established the following basic facts: that MCPS is still deeply segregated, and that schools with higher minority populations often face more educational barriers compared to their majority white counterparts. MCPS has tried to incentivize racial diversity by creating IB and magnet programs at several schools. While well intentioned, this initiative has been insufficient to solve MCPS’s diversity problems. However, if MCPS actively encourages more cross-school student interaction, students would be better equipped to expose themselves to upbringings that differ from their own.

It may help students at Whitman to better recognize and reorient their thinking when it comes to other ethnic groups. Even though we live in one of the most multicultural counties in the country, not all students are receiving the potential benefits that diversity offers.

Whitman is no stranger to incidents of racism and intolerance, with last year’s racist graffiti on school grounds being only the most recent example. If we are to properly address the issues of racism that have plagued our community for years, one of the first steps needs to be increasing cultural understanding and diversity amongst the student body.

At last March’s MSP retreat, I had the opportunity to learn about issues that had barely crossed my mind from the students facing those exact challenges; it widened my perspective, and I’m better off for it. But diversity shouldn’t be confined to a single event once a year. More students should have the opportunity to learn about the wide array of cultures that exist within the county. Sometimes, all it takes is one student to invite another perspective.