The Black and White • October 25, 2020 • https://theblackandwhite.net/68239/feature/cycling-into-senior-year-students-bike-to-pittsburgh-over-the-summer/

Cycling into senior year: students bike to Pittsburgh over the summer 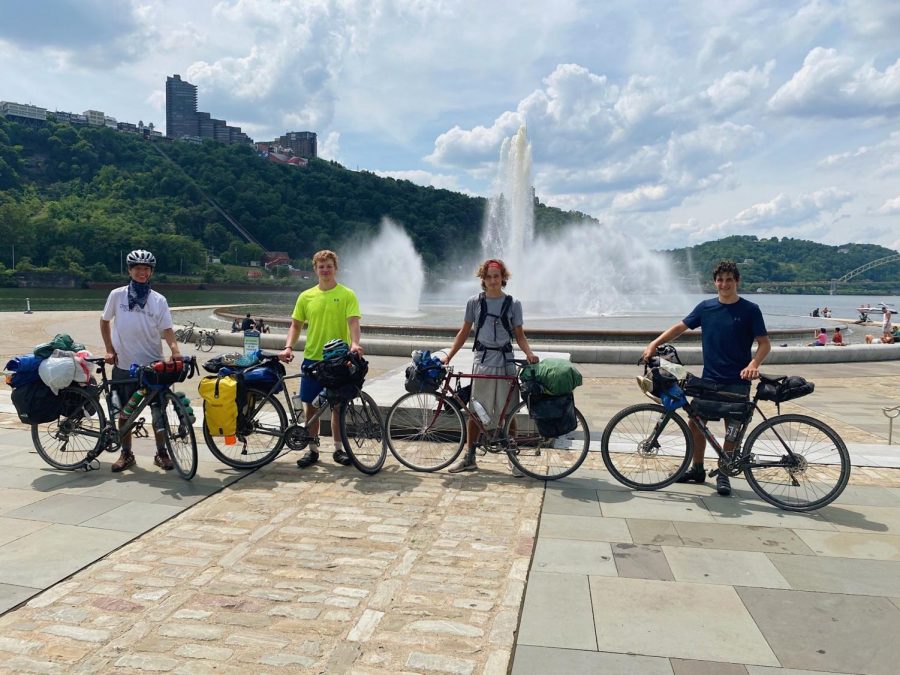 Seniors Finn Martin, Adam Melrod, Nicholas Pyle and Jordan Maggin watched from the roof of their hotel as the Pittsburgh skyline lit up with a breathtaking pink hue. The sounds of pop music and a gentle breeze accompanied them as they ate their meals and watched the sun set. After an exhausting week-long, 350 mile bike ride from DC to Pittsburgh, Martin thought that the evening was the perfect way to end their trip.

“It was a great moment,” Martin said. “That was the conclusion that the trip needed right there.”

With COVID-19 cases on the rise and their summer plans cancelled, the four seniors sought a new type of adventure. They initially planned a two-day bike ride to Harpers Ferry, but after several conversations, the excursion mushroomed into a trek to Pennsylvania. For seven days straight, the group biked for hours on end, visiting unfamiliar towns and camping out in various locations, sometimes in unpleasant weather. Although there were obstacles along the journey, the determination to persevere brought the four closer together, Maggin said.

Each of the bikers had previously attended several biking programs with Overland Summers. Before the American Challenge was cancelled, Maggin had planned on participating in its  six week, summerlong trip of more than 3000 miles, crossing the country from Savannah, Georgia to Los Angeles, California.

Maggin was enthusiastic when he found out the alternative plan his friends were discussing — Martin recalls Maggin responding with an all-capitalized “YES” when asked over text if he wanted to take part in the trip.

“I was happy,” Maggin said. “It was something to take my mind off of being cooped up at home.”

Once the seniors decided to go on their week-long trip to Pittsburgh, it took them several weeks to buy gear and finalize their plans. They used the Park Service website to study their route, picked which campsites they would stay at for the evenings, searched the locations of nearby grocery stores and even contacted their counselors from previous summers for biking tips.

On the morning of August 5, the seniors met up at around 9:00 a.m. at an entrance of the C&O Canal. After a few trips back to their houses to recover forgotten items, the four began their journey.

The bike trail from Bethesda to Pittsburgh is excellent for a scenic long-distance trip, Pyle said. Bikers cycle through the C&O Canal until Cumberland, Maryland, when the trail becomes the Great Allegheny Passage. The passage ends in Pittsburgh, a city the four hadn’t had the chance to visit before their trip.

Although Pittsburgh was their final destination, the group also enjoyed exploring the small towns they visited along the way, Melrod said.

“All the towns we biked through were so different from each other and from where we live,” Melrod said. “I’ve never experienced that before.”

During the trip, the seniors saw the Potomac River at Harpers Ferry, West Virginia, traveled to the college town of Frostburg, Maryland, and passed through a number of rural towns.

The simplicity of biking gave the seniors clarity of mind, Pyle said. Every day, after several grueling hours of biking, the four found themselves alone with nature at a wooded camping site. Although they had decided what campsites they would rest at before the trip, the group would often stray from the plan upon arrival. Oftentimes, their pre-selected locations didn’t provide water, forcing the group to bike more miles than planned in order to stay hydrated.

After unpacking heavy luggage off their bikes and setting up camps, the seniors had time to chat, relax and watch the sun go down. They left the trip bonded by the shared experience of exhaustion, Martin said.

“Some days, our legs turned to jelly and we were all sitting around, waiting at the campsites at night,” Martin said. “We were just waiting to eat a lot of the time.”

Throughout the week, the seniors mostly had to make their own food. Thankfully, they had a chef in their presence: Adam Melrod. A fervent cook, Melrod frequently prepares home-cooked meals for his family and had even applied to the restaurant rating company Michelin Guide for an internship, although he was rejected. He assumed the role of preparing every meal at the campsites, using a frying pan and a foldable red stove that could fit in his pocket.

Cooking at camping sites with such limited supplies was a constant struggle, Melrod said. For three days, the group just ate sausages, which Maggin downed alongside a mix of bananas mashed in with beans. Melrod made his friends a variety of food whenever possible.

“One night, Adam made a pasta dish,” Martin said. “It was the best food we had, considering the nights before.”
After their dinners, the seniors would go to their individual tents to sleep. Falling asleep in the wilderness is easier said than done, Pyle said. Most nights, the weather became uncomfortably hot. The noises around the campsite were also disturbing, Melrod said.

“I kept on waking every one to two hours,” Melrod said. “You wouldn’t think that it would be so loud out. When there’s no one around, all the bugs are so loud.”

One of the greatest concerns of their trip was the weather. Though the four had delayed their trip due to tropical storm warnings, they still weren’t fully able to escape harsh weather conditions.

A few days into the trip, a storm hit while the group was biking through traffic on their way to a local grocery store.

“All of a sudden, the sky opened up and there was a torrential downpour with thunder and lightning all over us,” Maggin said. “It was consistent uphills and downhills with no visibility. It was nerve-wracking.”

Aside from the storm, the weather on the trip held up well, Melrod said. The clear skies and beaming sunshine boosted the four’s morale and allowed group members to motivate each other to keep forging ahead, even when they felt exhausted.

The seniors almost managed to finish the trip without any mishaps, Maggin said.

“We went the entire trip without a single flat tire, a single accident,” he said. “And about ten miles from Pittsburgh, I crashed into the person in front of me.”

Thankfully, no one was injured and the seniors managed to reach their final destination safely.

Although they dealt with unpleasant weather conditions, a crash and disagreeable campsites, in the end, it was worth it, Melrod said.

“We definitely had some rough patches, but it wouldn’t have meant as much if we didn’t have to work for it,” he said.

When they arrived at Pittsburgh, the four were more than ready to accept the luxuries of everyday living — especially food other than that of ill-supplied friends. After a long week of camping and biking, the hot meals felt as though it was the best he had ever had, Martin said.

The fond memories of biking across state lines and hundreds of miles with friends will stay with the group for years to come, Martin said.

“Being able to bond with friends and see the world from a bike was amazing,” he said. “I recommend everyone should do this at least once in their lifetime.”

Finn Martin is a member of the Black & White’s photography department.