How “The Social Dilemma” changed my life 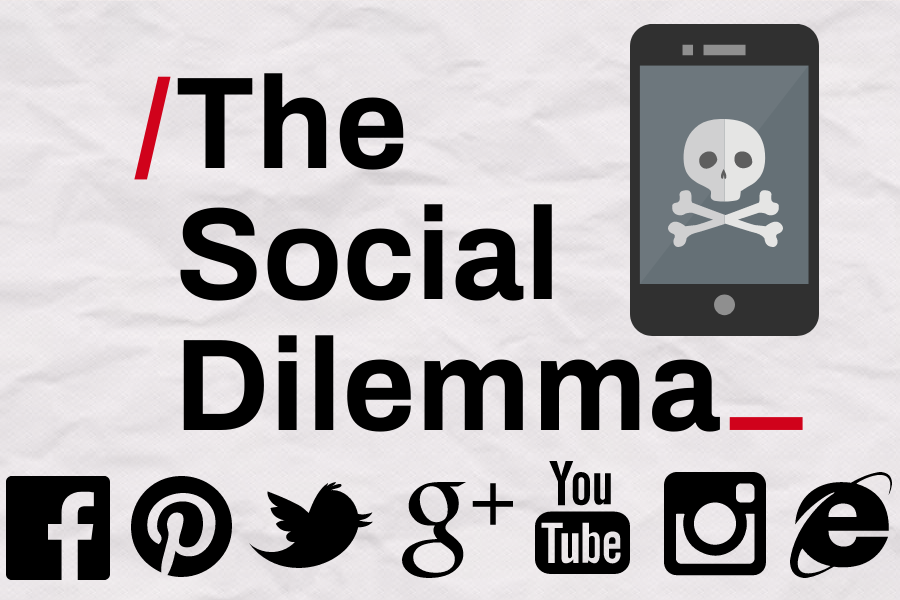 Released in January, 2020, "The Social Dilemma" is a perspective-shattering documentary.

Social media is my gateway to a wealth of information. Every morning, my routine of scrolling through apps remains the same. I check Instagram to stay updated on any sports news from the night before, I watch several TikToks for my morning dose of memes and I run through a few channels on YouTube, mainly to figure out which stranger Youtube star Mr. Beast surprised with his weekly $10,000 reward. I spend at least thirty minutes engrossed in my mindless scrolling, seemingly paralyzed in my bed.

My digital wandering only stops once I join my first class of the school day, where I’m not allowed to have my phone out.

My parents occasionally bother me and my sister, asking us to spend less time on social media, but I never questioned the amount of time I spent on various online platforms; it’s always just been something I did. And I’m not the only one who is fixated to my screen, people all over the world seem unable to get their hands and eyes off social media.

It wasn’t until I watched the documentary-drama “The Social Dilemma” on Netflix that I began to reflect on my social media use.

“The Social Dilemma,” released September 9, interviews former high-ranking employees of technology corporations in order to educate the public on how these companies have manipulated the populace since the dawn of social media. The documentary’s message is clear: there is no worse evil than the corruption of a population without knowledge. Although all people, regardless of age, are manipulated, experts often reference one demographic which is more acutely susceptible – Generation Z, my generation.

The film often feels like a parent nagging that your phone will rot your brain, but with the level of detailed argumentation and expert testimonials, you come to ask yourself: “What about social media is good for me?”

Proponents may point out some of the positives: social media helps people connect more intimately with friends, find more entertainment and have an ever-updating news feed. While this all may be true, social media has evolved beyond all that. Connecting with friends is not the primary function anymore. Social media platforms are designed to keep you trapped. Every notification is meant to direct you onto the app and every subsequent post is meant to keep you there.

After watching “The Social Dilemma,” I began to pay attention to what I was seeing on my feed, and noticed that almost every post I saw was catered to my preferences.

It was a Steelers game day, and all the sports accounts I followed were talking about Pittsburgh’s dominance in the AFC North. My feed was being directed to my interests as a means of keeping me online. Why would I want to stay on an app that dares to challenge my football allegiance?

The same pattern existed in the news I was receiving on social media. I’d only find articles affirming my beliefs, not challenging them. Even before watching “The Social Dilemma” I began to recognize the lack of information diversity in my news feed. Considering the upcoming election, I began to follow more conservative and moderate news sources to balance out my liberal views. I was amazed with what I saw –– a different universe of viewpoints. My normal CNN posts about social justice or the catastrophic effect of the pandemic were met with Fox News headlines about record-setting fish catches and op-eds against athletes kneeling during the national anthem.

Soon, more conservative-centered ads and recommendations began to pop up throughout my feed, including Charlie Kirk of Turning Point USA and Ben Shapiro of The Daily Wire. Instagram clearly noted that I had followed right-wing media accounts, and altered their advertising accordingly.

“The Social Dilemma” allowed me to pick up on the cause for my change in ads and recommended media. Social media companies often nudge us with little things, such as ads and notifications, to keep us spiraling down a rabbit hole, and the film opened my eyes to this phenomenon.

When quarantine first began, I fell victim to this social media addiction. And yes, it is an addiction.

“There are only two industries that refer to their customers as ‘users’: illegal drugs and software,” said Yale computer science professor Edward Tufte in the documentary.

After schools closed and most extracurriculars were cancelled, I spent every free minute scrolling through TikTok, Instagram and Youtube. One day, I even went as far as spending almost seven hours on just TikTok and Instagram. The most alarming part of it all was that I was completely unaware of the time I spent, and I gained nothing from it. In fact, the only benefiting parties were the social media companies, who made a few dollars off advertisements.

I have since begun to change my approach to how I handle social media. After watching the film, I started putting my phone on ‘do not disturb’ throughout the school day to block all notifications. I have also been finding ways to keep my hands occupied so I can resist the urge to look at my phone. Simple fidget toys such as stress balls have helped curb my mindless scrolling.

My change in approach to social media has genuinely helped me improve my life. I’ve been able to complete work more efficiently and at a higher quality, I have more time in the day to pursue other interests and I’m able to control my own use of time again. The information I learned from “The Social Dilemma” changed how I interact with social media. If I hadn’t heeded the documentary’s warnings, the unforgiving grasp of social media would still be gripping my mind today.