The Black and White • October 20, 2020 • https://theblackandwhite.net/68212/feature/the-immediate-reaction-was-heartbreak-christina-limanksy-helps-aid-lebanon-after-explosion-in-capital/ 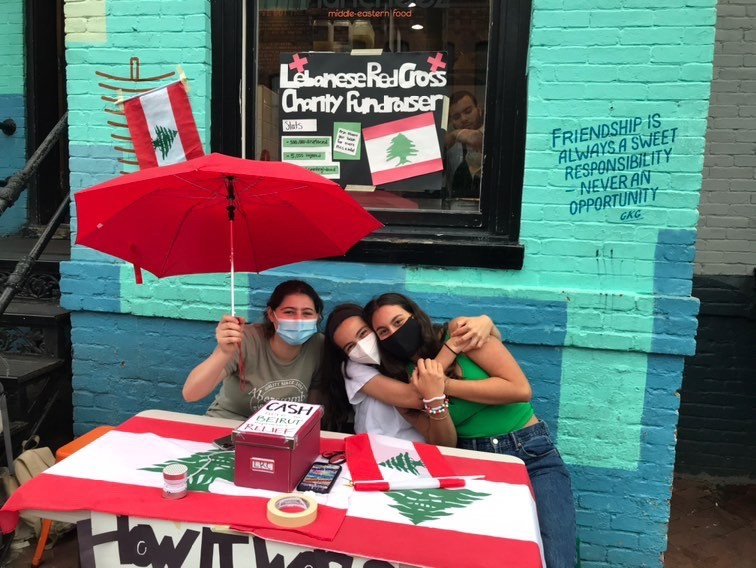 Junior Christina Limansky finishes a dance routine she spent hours working on at the Elements Dance Company camp. Breathless, she stretches out her arms while heading over to the bench for a break. When Limansky grabs her phone to check the time, she finds a surge of missed calls and texts flooding her home screen. Her stomach drops as she reads the headline dominating her news feed: “LEBANON’S CAPITAL CITY ROCKED BY EXPLOSION.”

Christina’s mind raced to her extended family that resides right outside of Beirut. After half an hour of panicked calls and texts to her cousins, grandparents, aunts and uncles, she was able to connect with her family and breathed a sigh of relief after learning that they were all uninjured.

“It was really difficult to just reach everyone,” she said. “I was able to get in contact with my family, but my cousin couldn’t reach many of her close friends for hours.”

For Limansky, Lebanon is more than just a country; it’s a second home. She regularly visits her family in the region and considers the country a crucial part of her identity. Along with obliterating surrounding buildings, the explosion in Beirut shattered windows in homes up to six miles away and left the air thick with toxins and smoke. Houses carry a deep level of cultural significance for the Lebanese people, Limanksy said.

“There’s a lot of culture and history that comes behind the houses,” she said. “Houses mean a lot to people in Lebanon because of all they’ve been through.”

Losing parts of their homes or their relatives’ homes forced citizens to relive past trauma, including Limansky’s parents. The path of the nation has been a tumultuous one. Since winning its independence from France in 1943, Lebanon has survived civil war, foreign invasion and the crippling effects of an economic crisis due to government corruption. This has left many citizens unemployed and skeptical of their nation’s leaders, said Limansky. The blown out windows were emblematic of Lebanon’s past and caused Limansky’s relatives to become pessimistic about their homeland’s future, she said.

Limansky expected American news outlets to largely overlook the effects of the explosion and the country’s efforts to rebuild. She’s used to the apathy with which the media often reacts to violence in the Middle East, she said. Fighting to be heard, Limanksy took to Instagram, providing frequent updates, general information and links to aid donation websites on her feed.

“I feel like it was my responsibility to represent the Lebanese-American community by taking charge and allowing everyone to know what’s going on,” she said. “There’s a whole other country with people I really care about that’s really struggling to get back up on its feet.”

The resources on her Instagram were a good start, she said, but it wasn’t enough. Limansky decided to create a more direct channel for people to donate to the Lebanese Red Cross in order to help rebuild and aid families. She and junior Karla Stephan began circulating their personal Venmo usernames, serving as an intermediary to donate to the LRC.

“I was looking at the Lebanese Red Cross website and I realized that it’s a lot easier to just Venmo someone and get confirmation rather than go through the whole app putting in information,” she said.

Starting in the first week after the explosion, the pair compiled all digital donations through Venmo and sent them to the LRC. Limanksy and Stephan accumulated nearly $2,000 through Venmo.

Their work didn’t stop there. The pair, along with Susan Hammoud (‘20), contacted Muncheez — a Lebanese-American restaurant in D.C. — to organize a charity fundraiser for Beirut relief funds.

“I reached out to Muncheez because it was near the waterfront, meaning many people would pass and see our posters,” Hammoud said.  “Muncheez worked out perfectly. They were on board with all of our ideas and were more than happy to provide whatever we needed for the fundraiser.”

“When Susan reached out to me, I immediately liked the idea of putting their fundraiser outside of Muncheez,” Dayie said.  “Muncheez wants to help anyone that reaches out, and this was the perfect opportunity to connect with our roots and help at the same time.”

From August 14 to August 16, the trio set up a stand outside of Muncheez with posters and music. As people approached the restaurant, Limanksy and other volunteers would teach them about the explosion’s impact and ask for a $10 donation in exchange for free lemonade with their meal.

Muncheez also donated 10 percent of their revenue garnered over the three days to the LRC.

“It was really generous of Muncheez to allow that to happen,” Limanksy said. “That event and the Venmo in total raised $4,000 for the Lebanese Red Cross.”

As Limanksy and her family, along with all others affected by the explosion, continue the long road to recovery, she urges everyone to develop a more complex understanding of Lebanese issues.

“I just encourage the Whitman community to definitely be open to listening about other people’s experiences,” she said.  “It’s really important to understand what’s going on for them, and be present so they feel like they have their own community here.”

The LRC is constantly taking donations, and so is Limansky if the payment is labeled to indicate a donation (Venmo: @christina_limansky).  The money will be used to rebuild Beirut and help the harmed families.