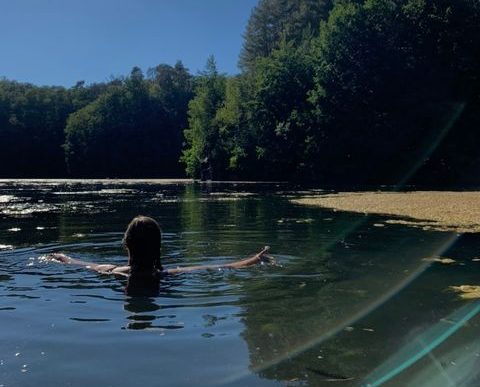 Learning in Germany, senior Lily Muchimba has lots of free time where she often swims, as pictured

As the summer of 2020 dwindled to an end, students settled back into their desks and fired up their computers for an unprecedented semester of virtual learning. But for senior Lily Muchimba, her desk, home and computer would be located in Bad Vilbel, Germany. When she heard that MCPS was committing to virtual learning, she was quick to extend her initial summer visit to see friends and family until the end of January.

Due to the coronavirus pandemic, the first semester of the 2020–2021 school year is being conducted entirely online. These virtual classes have given some students and their families the freedom to travel the world, doing schoolwork along the way.

Before she came to Whitman her sophomore year, Muchimba lived in Germany and attended school there. She had already been planning to return for the summer because she hadn’t seen her mother in 11 months, she said.

“After so many months, seeing Lily every day has been the best thing that could happen to me,” Muchimba’s mother, Palisa said. “Her presence is so uplifting and she lights up everything.”

Before MCPS announced the switch to online school, Muchimba expected to come back to the United States and attend Whitman for her senior year. Although she will be living in Germany for the next few months, Muchimba chose to stay enrolled at Whitman rather than attend a German school due to curriculum differences.

“When I used to live in Germany, I didn’t like the curriculum as much because it was a lot harder,” Muchimba said. “If I were to go back to school in Germany, I would have to repeat a grade.”

American virtual learning in Germany has both its benefits and its drawbacks, Muchimba said. Though she gets to see her friends and family constantly, Muchimba also has to attend classes in the evening due to the six-hour time difference between Washington D.C. and Bad Vilbel.

“It sucks because that means I can’t go out,” Muchimba said. “But I’m also at an advantage because I don’t have to wake up early in the morning like everyone else.”

Days in Germany are far more relaxed than American school days because they start later in the day than they do in the U.S.

At around 10 a.m., Muchimba wakes up and starts her day by eating breakfast at the local coffee shop. After her meal, she finishes up her homework and finally starts her first period at 3:00 p.m. at the library near her house. Muchimba’s lunch and wellness break falls around from 5–6:30 p.m., so during that time she will usually hang out with her friends at a park.

“I missed her a lot and I needed to see her,” said Gracia Patricia, one of Muchimba’s German friends. “I have a lot of fun with her and I hope to have a lot more nights out with her.”

After a long night in classes, Muchimba often has to do additional work in order to stay on pace.

“The class ends at 9 p.m. and I’m usually really tired,” she said. “I try to get some work in before the next day so that I don’t have to do as much in the morning.”

On days when there isn’t school, such as certain Wednesdays and weekends, Muchimba enjoys her spare time with her friends and family, she said.

Germany’s coronavirus restrictions are much less stringent than those in the United States, which makes it much easier for teenagers to go out and spend time with their friends.

“In Germany, we are allowed to hang out in bigger groups of people now because the citizens followed the restrictions at the beginning of the pandemic,” she said. “The culture here is also a lot more fun for teens because you can go out in the city, safely party, get on the train and literally go anywhere.”

In addition to spending time with friends, it’s a lot easier to travel and go places like Amsterdam for the weekend, Muchimba said. For her fall break, Muchimba is traveling by train to London and spending two weeks in the city. Due to the pandemic, traveling such great lengths would be more restrictive in the U.S., Muchimba said. Living in Germany gives Muchimba the freedom to do that.

Having such close friends in the U.S. makes staying in touch with them much simpler. Muchimba keeps in touch with her American friends over text or through social media on a daily basis. Before school and during lunch is when Muchimba and her friends can FaceTime about their days or college applications, said senior Victoire Villette, one of Muchimba’s closest friends.

“We have been in quarantine for over six months now and we haven’t seen each other in a long time,” Villette said. “It’s been hard to not be able to hug her and hang out.”

Uncertainty still surrounds the future of MCPS and when exactly classes will begin in person again. If classes return to in-person learning for the second semester, many students like Muchimba who are traveling abroad will likely have to return for the resumption of classroom instruction.

“I will be coming back next year either way because I miss my family in the US and my American friends,” Muchimba said.

Going back to an in-person learning environment will require Muchimba to return home to the U.S. But when school lets out in June, Muchimba is scheduled to return to Bad Vilbel. After that visit, future trips to Germany remain uncertain. Either way, Muchimba will continue to have a loving network of friends and family on both sides of the Atlantic.

“She lights up everything in every possible way,” Muchimba’s mother said. “Whether it’s during breakfast when she’s barely wide awake, or randomly when we are out shopping for groceries. My world is filled with so much joy and laughter when she’s around.”