The Black and White • October 11, 2020 • https://theblackandwhite.net/68161/feature/atiwa-jewelry-charms-customers-worldwide/ 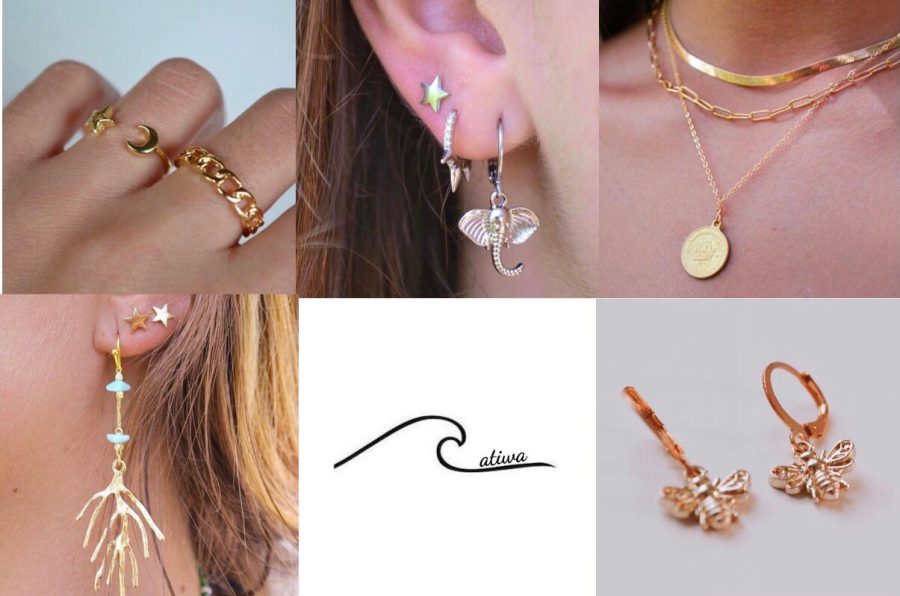 After moving to Bethesda, seniors Esther Ferrero and Lucia Kaiser were often showered in compliments from peers on their style.

“Esther had an elegant and unique style which definitely caught my eye,” junior Giulia Baroldi said. “It was very different from the rest.”

But after the two would share where they bought their jewelry, those looking to buy a similar pair for themselves were often disappointed.

“Whenever we wear something people really like, they ask where it’s from,” Ferrero said. “And we have to say it’s from Spain.”

Following the lead of a few entrepreneurial friends from Spain, Ferrero and Kaiser began designing an online jewelry service of their own, catering to students who appreciated and wanted to replicate their aesthetic.

In March, the pair launched Atiwa Collection, an online jewelry store. Ferrero and Kaiser had originally planned to sell products in person, but the coronavirus pandemic reshaped Atiwa into a digital, international business with worldwide shipping.

Atiwa’s logo features a simple wave, which reflects the summers the co-founders spend in Spain. The Spanish word for water, Agua, inspired their company name.

Both students have lived and experienced different cultures around the globe. Ferrero lived in Luxembourg and Spain before settling in Bethesda her sophomore year; Kaiser lived in China and Spain, moving to the Whitman area her junior year.

Once in the U.S., they quickly noticed the stark differences between European and American styles.

“In Spain, we accessorize a lot,” Kaiser said. “Spanish style is simple and elegant, but over the top at the same time. We’re not as laid back about our style. It’s something that people take seriously in a way.”

Just two weeks before school was suspended, Ferrero and Kaiser launched Atiwa Collection with five simple Spanish-style hoop earrings with charms, intending to sell their jewelry in person to family and friends, but school closures forced them to alter their plans.

“We had to think of a new idea,” Ferrero said. “So we researched how to send packages.”

Ferrero and Kaiser first learned to ship their jewelry domestically, and before the end of the school year, they were shipping to European countries as well.

To advertise their products globally, the pair has collaborated with both international and American influencers, including Youtuber Caiti Mackenzie and inspiration accounts on Instagram. These collaborations have helped Atiwa gain a growing following on social media and have significantly increased the amount of interest in products, Ferrero said.

Ferrero and Kaiser are proud to call Atiwa Collection an international brand. So far, they have sent their jewelry to Spain, the U.K., France, Germany, Portugal and Luxembourg. Each country has different national bestsellers and customers with distinctive fashion senses, Kaiser said.

Marta Duenas, a senior living in Luxembourg, said she has worn the lightning bolt hoops she bought from Atiwa all summer.

“I feel like everyone can appreciate Atiwa’s jewelry,” Duneas said. “They have so many designs and they’re all really cute.”

Kaiser moved temporarily to Madrid in July, which has forced her and Ferrero to work together across continents from different time zones. Although this change makes communication more difficult, it has allowed the two to sell and ship their products to more clients in Europe. Instead of having to send packages internationally through the U.S. Postal Service, they can now ship directly from Spain, which is cheaper and more efficient.

Kaiser also sets up a bimonthly jewelry booth in Madrid, carefully organizing Atiwa products and selling them to customers in person. She announces on Instagram when and where she will be setting up her stand to attract followers and maximize the crowd. Due to pandemic precautions, she provides hand sanitizer for customers and cleans each piece of jewelry after it has been touched.

“It’s been very successful,” Kaiser said. “Setting up the table to look nice is a lot of work, but it’s definitely worth it.”

Kaiser and Ferrero both help design and assemble the jewelry, but with an ever-expanding clientele and complex assembly process, the work is easier said than done, Kaiser said.

“Everything is so small, and you need so much patience,” she said. “It’s easily 20 minutes making a singular earring.”

Atiwa’s elegant styles have come to attract a large number of customers — far more than they had expected. The two say that their favorite part of running the business is receiving positive customer reviews about their jewelry.

“We really like that feeling,” Ferrero said. “When they send us a message, it’s like all of our time and effort were well spent.”

Junior Sara Hayes decided to purchase a pair of gold eye hoops after she followed Atiwa’s Instagram account. She was instantly attracted to their aesthetically-pleasing feed, which has a soft color scheme and expertly photographed jewelry.

“Their jewelry is more unique than styles I’ve seen in American stores,” Hayes said. “They incorporate their own Spanish style into dainty jewelry, which is very trendy right now.”

Although Ferrero and Kaiser’s love for Spanish jewelry was the inspiration for their business, the pair decided to expand past the traditional fashion norms by mixing Spanish and American styles.

By running an intercontinental brand, Kaiser and Ferrero bring cultures together through jewelry.

“It’s interesting to see how many people from different places are interested in our jewelry,” Kaiser said. “We’re really proud.”