The Black and White • October 9, 2020 • https://theblackandwhite.net/68131/opinion/its-time-to-abolish-standardized-testing/ 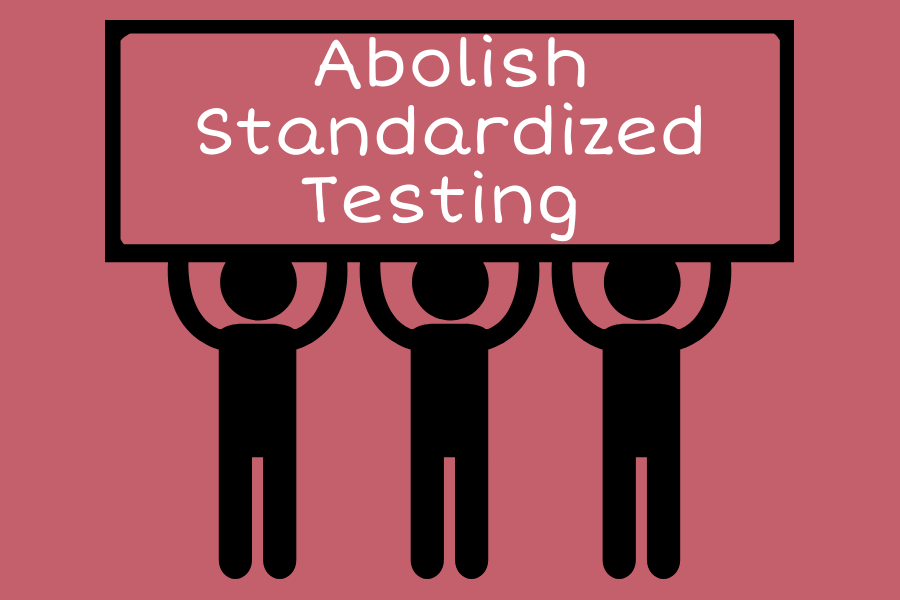 While students from wealthy backgrounds can afford tutors and multiple test dates, many of their less privileged peers don't have these opportunities.

After struggling to find a way to take the SAT during the coronavirus pandemic, senior Claire Sorkin drives for 90 minutes to an unfamiliar location in Virginia in order to take the test. Upon arrival, she’s relieved to know the exam hasn’t been cancelled. She puts her mask on and enters into a sparsely-packed room with five other students. To Claire, these test-takers are complete strangers, which makes the prospect of potentially contracting the virus all the more frightening. Moments like this make it clear: it’s time to abolish standardized testing.

In the early 20th century, standardized testing exploded onto the scene in the United States with the introduction of a college entrance exam known as the Scholastic Aptitude Test. Immigrants first arriving in the United States were some of the country’s earliest standardized test takers; these tests would determine their social standing and possible career opportunities. To this day, colleges and universities use the same metrics to examine applicants’ skills. The reality, however, is not so clear cut. Historically, these tests were often used to justify poor treatment of immigrants. Standardized testing’s place in college applications creates an opportunity gap between students of different races and socioeconomic statuses — the effects of which are long lasting.

As COVID-19 continues to ravage the country and the world, the future of standardized testing is uncertain. Many upperclassmen have lost crucial opportunities to take the ACT and SAT assessments, benchmarks which, in pre-pandemic years, were required by most colleges as a part of the application process. As a result, countless universities, including Columbia University and Brown University, have made these tests optional for fall 2021 applicants. These unprecedented alterations to the admissions process might have effects long after the pandemic wanes. Admissions staff, educational psychologists, politicians and future test-takers are now rethinking the need for standardized testing in the first place.

It has become obvious that standardized testing is an unnecessary and inequitable way to measure any given student’s intelligence. The test simply doesn’t accommodate the external factors that go into test preparation, such as access to a tutor or $30 study guides.

“Not everybody is equally well prepared to take the SAT or the ACT, and that’s not 100% attributable to how hard-working that person was,” said Jen Dillon, Director of AdeptPrep tutoring. “There’s a deeper crime happening in America, which is the difference in educational opportunities of kids, depending on how much money your family has, and that is a terrible, heartbreaking tragedy.”

Proponents of testing may argue that these assessments demonstrate a student’s ability to strategize and apply concepts effectively. If everyone is held to the same standards on test day, the thinking goes, then all students are on equal footing. However, inequities mainly stem from what happens before pencils hit the scantron. Privilege quickly starts to reveal itself when wealthier students have access to test-preparation resources, while those without the means to succeed are left behind.

Within the Whitman community, most parents can pay thousands of dollars for tutors. Bethesda residents also tend to have the funds to make sure their children take tests as many times as necessary. But less privileged students don’t get those second chances. They can’t afford tutors to boost their scores and may only have a single opportunity to take the test in school, where it’s prepaid. The scores of privileged students are therefore impossible to fairly compare with the scores of their less privileged peers; there is no legitimacy in comparing those two scores as a college admissions officer.

Additionally, the formatting of standardized testing possesses inherent biases against non-Native English speakers and students of color. An analysis from the Brookings Institution found that the average score on the math section of the SAT for black (428) and Latino students (457) are significantly below those of white (534) and Asian students (598).

Young Whan Choi is the Manager of Performance Assessments at the Oakland Unified School District. In Oakland, California, where Choi manages performance assessments, the student testing pool comes from a racially and socioeconomically diverse community—70% of students in Choi’s region are on free and reduced lunches. He believes that test makers are likely to include questions on concepts recognizable to whiter, wealthier students. This way, organizers  are more likely to achieve the desired “bell curve” of averages among test results, putting students from diverse backgrounds at a disadvantage.

The world of standardized testing that Choi describes is one of obstacles for low-income students; an idea less apparent to their more privileged peers. Many students, even though they know how to write essays and how to make an argument, were unfamiliar with some concepts. Those concepts made it hard for them to respond to questions. That lack of foundational knowledge made it far more difficult for disadvantaged students to respond to questions.

“I think there’s no reason for the test makers to include something like that, other than to make it harder for groups of students, particularly students from an immigrant background, who had not been exposed to a certain concept,” Choi said. “That question could have been as easily asked using a concept familiar to students.”

Standardized tests only reward a one-dimensional view of intelligence and skill. There is no room for students to demonstrate a complex understanding of material; and as a result, less room for a diverse learning environment at the undergraduate and graduate education levels to emerge.

Intelligence cannot simply be measured by filling in bubbles under a strict time limit; the process is far too constraining. Countless students in the country are intellectually gifted, but poor test-takers, and they have lost higher learning opportunities as a result. Life-changing decisions such as college admissions, that often hinge on a student’s test performance, continue to produce social and racial inequality in society.

Universities need to take the crucial first step into promoting admissions equity by letting students decide what information best represents their abilities. In this regard, one institution stands out above the rest. The University of Chicago’s Empower Initiative strives to assist a great number of first generation and underprivileged students receive a higher education. It’s a significant precedent set forth by a prestigious university, which even before the pandemic, was one of the nation’s first selective institutions to adopt a test-optional policy. This policy allows students to decide which academic information best represents their college readiness.

Standardized testing may have once presented as equitable, but those days have long passed. In a country that already suffers from race, socioeconomic and gender-based equity gaps, an admissions process designed to favor privileged students only accentuates the country’s problems for the next generation.