The Black and White • October 6, 2020 • https://theblackandwhite.net/68105/opinion/south-lake-elementary-school-was-denied-renovation-for-over-8-years/

South Lake Elementary School was denied renovation for over 8 years

Shining a spotlight on systemic racism in MCPS 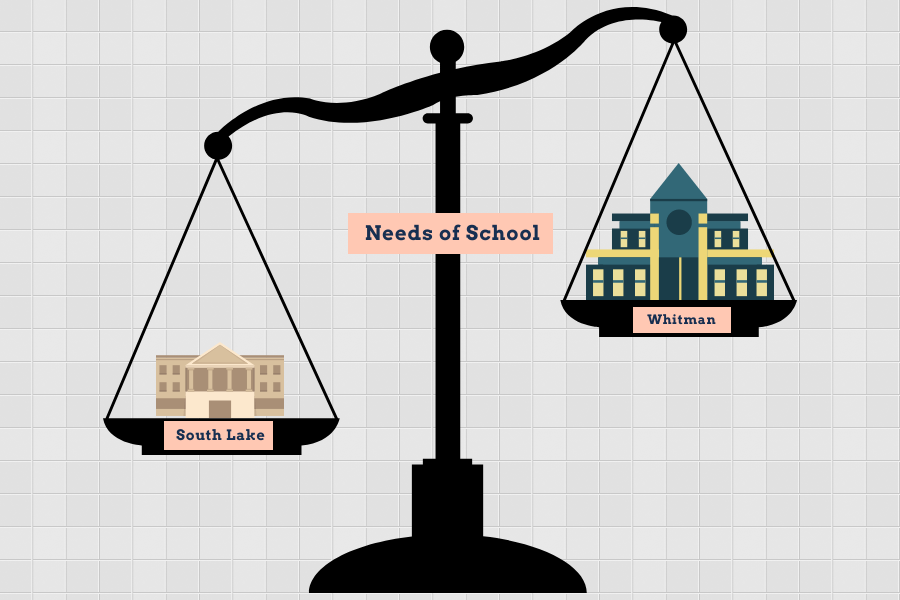 While schools like Whitman and Woodward were granted renovations quickly, schools in low -income areas like SLES were continually denied this opportunity.

Every school day, the 890 students of South Lake Elementary School would hustle through the overcrowded, sparsely heated hallways and into its rodent-infested classrooms, including 14 portables that consume the school parking lot. MCPS students should be entitled to a physically safe and comfortable learning environment, and the condition of SLES’ school facilities does not meet this criteria.

The Montgomery County Board of Education and the County Council has consistently failed to approve necessary renovations to SLES under MCPS’s Capital Improvement Program, despite the fact that the school is eligible for these improvements.

The student population of SLES is 90% Black and Latino. Around 88% of students are eligible for free and reduced lunches. Although the allocations for improvements to school facilities under the CIP are based on factual data, the educational experience in Montgomery County is anything but equal in practice, placing low income students at a disadvantage. By making the CIP process more equitable, MCPS can address the socioeconomic and racial disparities embedded in the current funding system. This will allow minority communities to receive the same access to quality facilities.

School additions and renovations are funded under the CIP and are based on MCPS’s key facility indicators. These factors help assess the physical condition of a given building. SLES exceeds multiple indicators, which include the structure and shell of the building, the services in the building, and the interior.

Though the CIP’s application is based on data, parent advocacy has a direct impact on determining which schools actually receive timely improvements. SLES is a perfect example of how the current system fails to give credence to the voices of a socioeconomically disadvantaged community, perpetuating the almost invisible ways in which systematic racism embeds itself into the fabric of our county.

SLES is overpopulated by at least 200 students, and the school’s overcrowding violates state fire and safety codes. MCPS has claimed to have resolved this issue by building over a dozen portables in the school’s parking lot; however, this decision also limited options for staff, forcing them to find alternative accommodations on the surrounding streets.

Even with the increased portable classroom space, bathrooms are still unable to satisfy the needs of SLES’ immense student body. There are 6 stalls throughout the entire school, three for girls and three for boys — which is simply inadequate for a school with 890 pupils. Furthermore, none of the new portables in SLES included a bathroom addition. Students in the portables who need to use the facilities must leave their classroom unaccompanied and walk outside into the main building. This becomes dangerous for young children; the school is located in an urban area across from Lakeforest Mall.

In addition to the overpopulation problems within SLES, the school’s HVAC system is in a state of disrepair and the cafeteria is not compliant with the Americans with Disabilities Act. These issues all contribute to an unsafe learning environment for students. Adequate facilities are the foundation of a child’s education, yet the County Council has not given the school’s urgent need for renovations sufficient attention.

When Nicole Bayles, PTA president of SLES, moved to Montgomery Village a few years ago, she was appalled by the physical condition of the school, she said. Since then, she has fought for necessary improvements to SLES in front of both the Montgomery County Council and the MCPS Board of Education.

The County Council has denied renovations to SLES’s facilities several times before finally approving a modernization project in 2019, with a scheduled completion date of 2023. However, in May 2020 Montgomery County faced a budget deficit, so the County Council voted to delay SLES’s timeline for modernization by at least a year in order.

The Council did not provide a concrete explanation as to why SLES’s renovations were specifically delayed, but while the former’s projects were placed on hold, other schools’ improvements including those at Whitman and Charles W. Woodward High School renovations remained on track. SLES was the collateral damage of the Council’s deficit, and now students in precarious educational facilities must pay the price.

Patricia O’Neill, a member of the MCPS Board of Education, said that she sees the needs of every school but is challenged by the limited funding.

District 1, however, which includes Bethesda, Chevy Chase and Potomac, received twice as much in CIP funding than District 2, which includes Darnestown, Damascus and Montgomery Village, where SLES is located. District 1 also received at least $200,000 more in funding than Montgomery County’s other four districts. Although the CIP distributes resources on an objective basis, this seemingly equitable system favors whiter, wealthier voices by permitting parent advocacy to weigh in on their decisions.

In the months since SLES’ renovation was delayed, public outcry prompted the Board of Education to approve placing the SLES project back on track, and the County Council is in the process of considering an acceleration. Until media coverage made it impossible to overlook, the voices of SLES’ majority-minority parent community, who advocated for a safe school environment for their children, were largely ignored by the Board of Education and the County Council.

MCPS has clearly stated its commitment to fostering an anti-racist culture and combating racism. MCPS announced that it will conduct an Anti-Racist System Audit to identify the needs and recommending actions required to combat racism.This solution, while a step forward, isn’t without shortcomings. Unless the audit also focuses on the equitable facility distribution funding to schools like SLES, the achievement gap in our county will continue to grow.

“They’re all screaming that Black Lives Matter, but now they really need to put their money where their mouth is,” Bayles said.

The effort to remedy racial imbalances in Montgomery County begins with MCPS. The County Council needs to increase focus on the issues more immediately plaguing minority communities, and reduce the influence of largely white, well-off parents. Playing favorites is the surest way to hurt the communities who need funding the most.