The Black and White • September 5, 2020 • https://theblackandwhite.net/67912/news/this-is-a-crime-scene-moses-african-cemetery/ 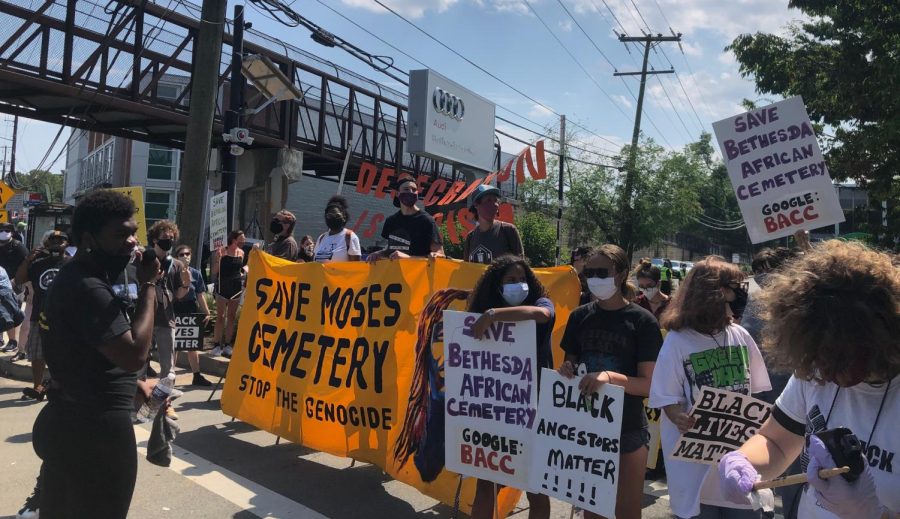 Demonstrators sing songs and shout chants in protest of the destruction of Moses Cemetery on River Road.

On Friday, September 4, demonstrators from the Bethesda African Cemetery Coalition held a rally to “save” Moses Cemetery, a historic African cemetery, from demolition. Around 80 people gathered for two hours near the Capital Crescent Trail overpass at River Road to protest the destruction of the cemetery, which is being replaced by a self-storage facility.

During the rally, protestors yelled chants such as “this is a crime scene, oh Lord” and “this is what democracy looks like,” with music blaring behind their pleas. Several demonstrators held  posters in one hand and flowers in another, placing the bouquets on a nearby fence in honor of those buried in the cemetery.

“The flowers on the fence symbolize respect and remembrance to the ancestors that have been completely disrespected and forgotten,” said Whitman alumna Sydney Wolstein, a marshall at the protest. “They show that we are still fighting for them.”

Leaders from the Macedonia Baptist Church run the BACC and have been fighting the destruction of historic Black cemeteries for the past three years. Since 2017, the BACC’s goal has been to preserve the burial grounds of freed slaves. The BACC soon became involved in the preservation of Moses Cemetery, and construction overtop the historic site began around two months ago.

Marshalls and traffic guards attended the rally to ensure an uninterrupted and safe assembly, while organizers provided food and water for participants. Protestors wore masks and practiced social distancing to ensure the COVID-19 pandemic would not stop those in attendance from voicing their disapproval of the construction.

“This is something that is happening in my own neighborhood, not something in DC, Rockville or Gaithersburg; this is next to my house,” said senior Jamie Gordon, an attendee of the protest. “I would be doing a disservice to my community for staying quiet on an issue like this.”