The Black and White • July 3, 2020 • https://theblackandwhite.net/67871/feature/swimmers-and-divers-reflect-on-lost-summer-season/ 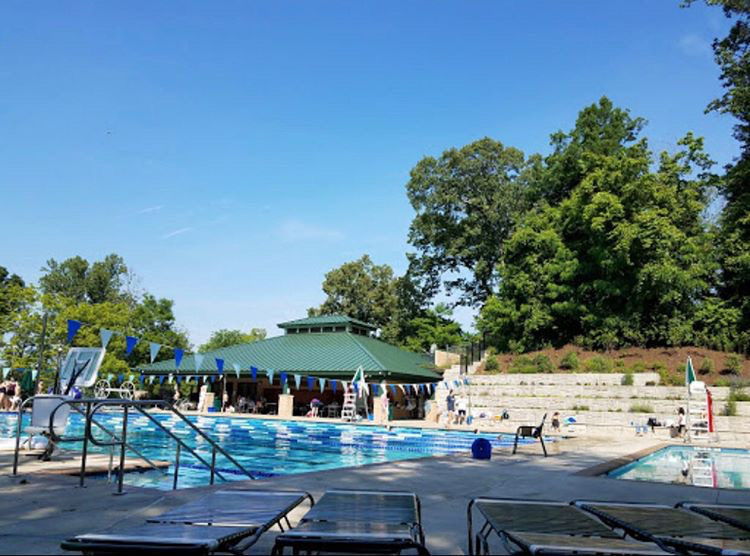 At eight o’clock in the morning, the Mohican Swim Club in Bethesda is silent. The birds are chirping, the sun is shining, and the pool water is untouched. That is, until rising junior Henry Cheetham arrives for another action-packed day. Over the course of five hours, he organizes chairs around the pool, participates in a rigorous practice session and coaches the ten and under swimmers on how to properly perform a flip turn. All the while, Cheetham looks forward to the coming weekend’s meet, where he and the Mohican swim team will cheer on their teammates decked out in USA themed outfits.

There’s only one problem: that all happened last summer.

The COVID-19 pandemic has led to the cancellation of virtually all summer activities, including the summer swim and dive season for local swim clubs such as Mohican, Palisades and Seven Locks. Whitman swimmers and divers who practice year round are devastated by the loss of a summer season. Most of their summer days were supposed to be spent at the pool; now they’ll be spent indoors by their TV’s.

“Summer swim and dive season is the biggest part of my summer,” said graduated senior Hannah Donner. “It makes summer feel like summer to me.”

The pandemic effectively ended Donner and countless other seniors swimmers’ final club seasons before they even started.

In order to allow a proper send-off for graduating seniors, certain teams have extended the age limit for college-bound swimmers and divers, allowing them to join the team during next summer’s season. Despite this change, seniors are uncertain about returning.

Donner doesn’t know what complications college may bring and if she will be able to come back to dive next summer. She’s crushed that she might never be a part of the team again, she said.

Swimmers and divers especially cherish the summer season because of the bonds they create with their teammates. Swim and dive members spend a majority of their summer days at the pool, giving them time to develop relationships with their teammates that extend beyond the laneropes.

“Over the summer, you’re not just at the pool for practices; you’re there just to hang out as well,” said graduated senior Clayton Steiner. “Seeing and talking to everyone is a really good way to build chemistry.”

The summer swim and dive season also brings an abundance of out-of-pool activities for team members. These include pep rallies, socials, and other team bonding experiences.

“Every Friday night at my pool, we have a pep rally,” said rising senior Zack Chirico. “That’s really fun because you get to eat around the same table with a bunch of different age groups and talk to all the different kids.”

The summer season strengthens the bonds between coaches and team members. At Mohican Swim Club, following each weekend’s meet, Cheetham and the coaches go out for dinner, he said.

“It’s like a little competition for us to see how many orders of cheese fries we can get,” Cheetham said. “That’s the fun part of the season that has nothing to do with diving.”

“All the little kids are so much fun,” Goldstein said. “The fact that they’re all swimming for the same team is really fun.”

Swimmers and divers are attempting to stay in shape as much as possible to make up for their lost summer season. Popular workouts include “dry land” dive exercises: running, biking, and swimming in backyard pools.

Many members are trying to remain optimistic about a possible return by the end of the summer. Some clubs, such as Mohican, have already come up with alternatives to the regular summer season.

“We’re organizing a little inter-pool community season right now,” Cheetham said. “I’m just grateful that we can have any sort of season in this time.”