The Black and White • June 16, 2020 • https://theblackandwhite.net/67825/news/two-whitman-students-and-one-alumnus-arrested-for-recent-racist-graffiti/ 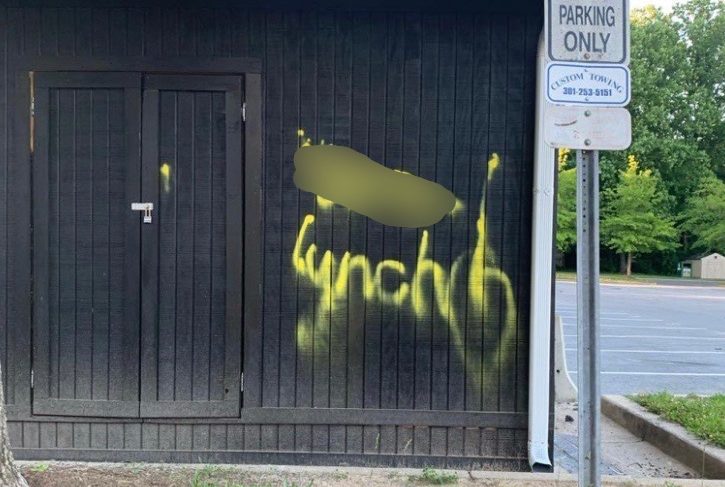 Photo taken of the recent racist graffiti before Principal Robert Dodd painted over it.

On Monday, the Montgomery County Police Department made three arrests in connection with the recent racist vandalism of a utility shed on Whitman’s campus this past Saturday. One of the suspects was also charged for vandalizing the school with identical racist graffiti on March 1.

The MCPD said in a press release that a 17-year-old male confessed to both the March 1 and June 13 incidents. Graduated senior Jake Hoffman and another 17-year-old male confessed to conspiring to paint the n-word, the word “lynch” and a depiction of a noose on the shed early Saturday. All suspects are current or graduated Whitman students, Dodd said in a PTSA meeting following MCPD’s announcement.

Police began investigating the suspects when Hoffman and the second 17-year-old, each accompanied by a parent, turned themselves in to the 2nd District police station on June 14 to speak about the most recent graffiti incident. Both regret vandalizing the school, according to the press release.

The suspects are not thought to have been working with an organized hate group, Sergeant John Reinikka said.

Though this act of hate disgusted many students, the reappearance of racism on school grounds did not come as a surprise to some.

“With situations like this, the Whitman stereotype holds true,” freshman Sonya Rashkovan said. “I try to tell my friends from different schools that we’re a great, diverse school, but when things like this happen, I can’t disprove them.”

The incident this past weekend is one of several hate-based acts that has affected Whitman over the last two years. In April 2019, two students posted a photo on social media of themselves wearing blackface, captioned with the n-word. This followed a student’s use of the n-word earlier that year in a social media post and the subsequent use of the racial slur as a username in a class Kahoot.

On Saturday evening, approximately 100 students and staff members gathered in front of Whitman to denounce the most recent graffiti.

“With all the work that we’ve put into raising awareness, just to feel like this is still happening, you feel exhausted,” said Spanish teacher Laura Brewer, the organizer of the protest. “You feel angry, you feel sick; we all need to do something.”

The most recent act of vandalism comes at a time of nationwide outrage and high racial tensions. Since the death of George Floyd in late May, rallies across the United States — including a Bethesda protest organized by Whitman students — have galvanized support against police brutality and systemic racism that has pervaded the Black American community.

“I just really want our school to step up,” junior Lily Muchimba, an organizer of the Bethesda protest, said. “This isn’t about random complaints or Black people just complaining for no reason. This is a serious issue.”