The Black and White • June 13, 2020 • https://theblackandwhite.net/67811/news/recurrence-of-racist-graffiti-on-school-property-marks-second-time-in-months/ 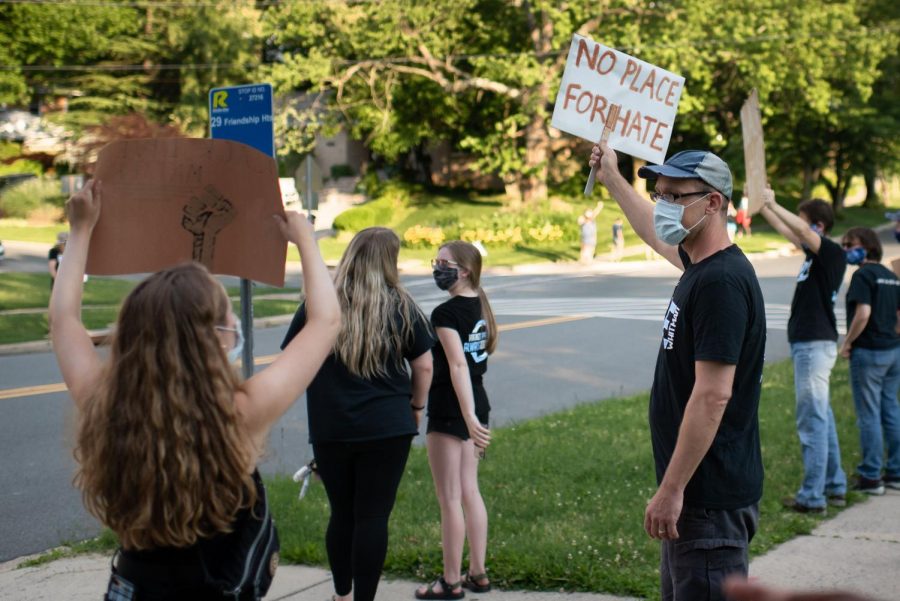 Students and staff protesting in front of Walt Whitman High School in response to racist graffiti on school grounds.

Racist graffiti was found on a utility shed on Whitman’s campus early Saturday morning, Principal Robert Dodd said in an email to the community today. This is the second incident of racist vandalism on Whitman’s school grounds in four months.

Dodd quickly painted over the graffiti, which included the n-word, the word “lynch” and a depiction of a noose, but not before a community member posted a picture of the vandalized property on Nextdoor, an online community forum. Dodd keeps spray paint in his office for instances like these, he said..

Police officers searched the campus for additional evidence, but found none, said Montgomery County Police Department Sergeant John Reinikka. Reinikka declined to comment on whether it’s likely the vandals are the same people who painted graffiti on school grounds in March, which used identical racist imagery and language.

This incident comes amid nationwide protests against systemic racism and police brutality against Black Americans, including a demonstration in which Whitman students organized in downtown Bethesda.

“There are those that say that this won’t change at Whitman, but I don’t accept that,” Dodd said. “I think it will change, but I know that it’s going to take all of us, and we’re going to have to really work like we’ve never worked before.”

Though the incident wasn’t the first of its kind to occur at Whitman, it still shocked many students.

“It’s just sad to see that people are still doing this,” sophomore Nina Ngeno said. “I find Whitman is a really welcoming space, but there’s always going to be bad people out there.”

There were no school cameras in the area to capture the incident, but the administration will work as swiftly as possible over the summer to add more cameras outside the building, Dodd said.

In light of the recent crime, Dodd noted the actions Whitman has taken toward eliminating racism, including implementing OneWhitman, a weekly class that works to celebrate diversity and combat hatred, partnering with the Anti-Defamation League and holding parent seminars on racism.

On Saturday evening, roughly 100 students and staff members gathered along Whittier Boulevard to condemn the graffiti in a protest led by Spanish teacher Laura Brewer.

“I do feel like there is a pretty tremendous commitment over the last two years on the part of parents and staff and students to address racism and hate in our school community,” Dodd said. “The conversations are happening, and actions are happening. It’s not just talk.”

On Thursday, Whitman’s Race, Equity and Wellness Coalition held two student forums to discuss recent acts of racial violence and how to combat racism at Whitman. About 100 students and staff members attended each discussion.

“I think the proper response is to take what we discussed in those first meetings and actually put it to work in a second meeting,” said one staff member involved in the conversations, who asked to remain anonymous. “At some point, it’s time to stop discussion and to actually put forth a concerted effort to act.”