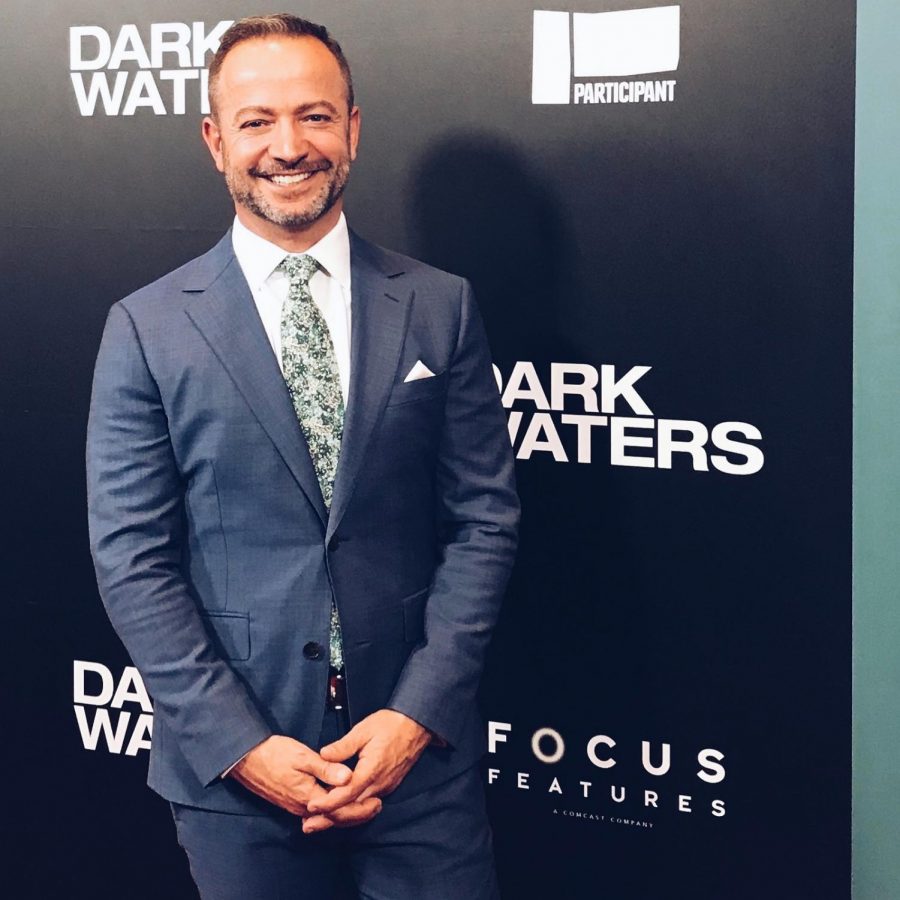 Screenwriter Mario Correa graduated from Whitman in 1987. His plays have been featured at the New York Fringe Festival and Off-Broadway. His 2019 screenplay, "Dark Waters," starring Anne Hathaway and Mark Ruffalo, is his first screenplay to become a movie.

Movie screenwriter Mario Correa graduated from Whitman in 1987. His first play, “Tail!Spin!”,  debuted at the New York Fringe Festival in 2012 and transferred to Off-Broadway in 2014. The first screenplay he wrote was, “Let Her Speak,” about Wendy Davis’ 2013 filibuster, which is currently being developed as a film.  He likes to write about real stories, and the 2019 film “Dark Waters” is his first screenplay made into a movie.

The film is based on a true story about a heroic attorney, Robert Bilott, who spends decades fighting to bring justice to a community exposed to deadly chemicals that have been in their water for years. Bilott risks his career and safety to uncover the secret hidden behind one of the world’s largest corporations. The Black & White spoke with Correa about his experience and journey to become a screenwriter.

The Black & White: How did you begin your career in screenwriting?

MC:  I always loved entertainment. When I was in my 20s, I knew I wanted to be in the industry, but I didn’t really have the courage at that point. My first love was politics. When I went to Whitman, my senior year, I volunteered for a delegate in the House of Maryland, Connie Morella. Morella was running for congresswoman around that time. She changed my life and is a woman who I thank for so many things to this day.

I started interning in her Capitol Hill office and eventually worked in her Capitol Hill office. It was after I started watching her and having her as a mentor that I started thinking about doing something different in my life because I wasn’t sure what I wanted to do. She inspired me to do what I love. I was a lobbyist for a number of years after that, and in all of my jobs, my favorite thing was always writing. So eventually, I got the courage to sort of leave the lobbying world and start trying to make it as a writer.

B&W: What drives your subject matter for screen plays?

MC: I really enjoy real life stories. I often gravitate toward stories of underdogs. All of the things I’ve written so far for film, including a project I’m working on now for HBO, are really these underdog stories. They are all about people who really have to move heaven and earth to do the right thing and whose means are really steep odds like Rob Bilott in “Dark Waters.” I also really love stories in politics and government because they are so influential.

MC: “Dark Waters” was already an existing script written by Matt Carnahan. He’s a really smart and talented writer. Often the case with movies is they go through many drafts of the scripts; it’s just part of the process. Matt did the first draft based on the true story in The New York Times magazine. Eventually, I ended up taking over the process and worked closely with the main character, Rob Bilott, the actor playing him, Mark Ruffalo, and producer Tom Haynes.

MC: There’s been a lot of action at the state level and some overseas and in the European Union as well, and some even in Congress. I think what our movie has done is help focus the spotlight on this problem of “PFOA” and these forever chemicals, as they’re called.

What I really want to stress is this two decade plus journey for Rob was lonely. I hope what this movie has done is shined a light on Rob’s work. I have seen a number of state legislatures on Capitol Hill on the rubber chemicals; none of this would’ve happened if it wasn’t for Rob’s commitment.

MC: This sounds cliche but it’s actually the truth: Whitman had amazing teachers that really cared about me. A very special teacher of mine was my government and history teacher, Don Buckley. [He] is gay, and at the time I was in the closet. Seeing him and meeting his partner, David Kennedy, showed me happy and smart people. It was amazing for a kid to see a gay couple. I looked up to them.

Another teacher who had a big impact on my high school experience was my humanities teacher, Susan Ryback. I clearly remember doing a presentation in class with one of my friends about cover songs. We talked about why the music industry was moving into doing so many covers. Afterward, my teacher asked me if she [could] see me at the end of class. She ended up telling me that she knows somewhere, someday she will see my name somewhere. She told me she knows I will be successful. What Mrs. Ryback said subconsciously stayed with me my whole entire life. She was one of the adults that put in my mind that everything will work out.

B&W: What advice would you give to aspiring screenwriters?

MC: Read a lot! To be a good writer, you have to be a good reader. Write any chance you get. Put on small plays. The first thing I wrote was put on at the New York Fringe Festival in 2012. If people like to write and want to work in this industry, I think plays are a wonderful thing to do and a great way to start because you can have your plays seen. They may not be on Broadway, but you can often find The Black Box theatre or a small stage to put on your plays. It’s important to experiment.