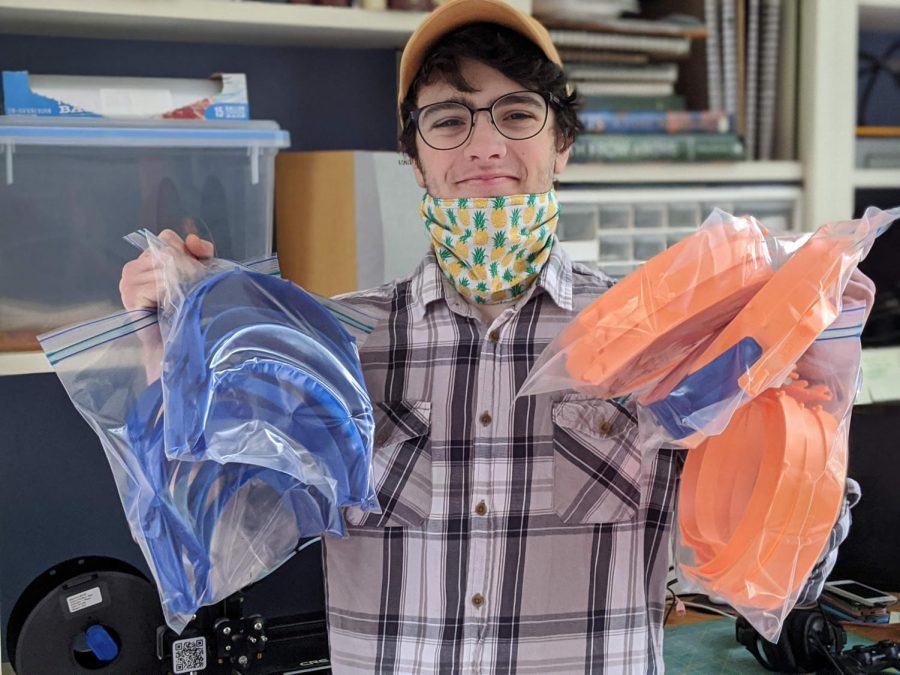 For most students, the past few months have consisted of sleeping in, watching Netflix and scrolling aimlessly through social media feeds for hours on end.

“Before quarantine, I used my phone for maybe two or three hours per day,” senior Henry Stoner said. “Now, I spend at least five hours on my phone. With not much to do during the day, it’s easy to just lose track of time.”

MCPS Deputy Superintendent Monifa McKnight recently announced the pass/incomplete grading policy for the fourth quarter; the more lenient grading system aims to reduce students’ stress and provide additional free time away from schoolwork to those who may need it. To many students like Stoner, the new policy simply creates more hours to fill. But, with seemingly endless time on their hands, some students are attempting to join the battle against COVID-19, including junior Ezra Bird.

“About a month ago, I started seeing people in the online communities for 3-D printing use their printers to create these face shield parts,” Bird said. “When I saw it, I was like, ‘oh, that looks really cool, and it seems like a good way to give back to the community.’ I wasn’t really doing anything else with my 3-D printer, so it felt like a waste to not try it out.”

Bird uses his 3-D printer to create face shield brackets, a part which connects to an elastic strap to hold a protective plastic visor. He then sends the brackets to his partner, Jacob Blumberg, who assembles the face shields. Bird and Blumberg are currently coordinating their efforts with the KID Museum, which works with the Montgomery County Department of Health and Human Services to distribute face shields to the hospitals most in need.

Initially, Bird planned to produce entire face shields himself. After attempting to purchase the materials that he would need, Bird realized assembling the entire shield without help wasn’t a possibility.

“I quickly discovered that it would be very hard to do, especially because many of the parts I needed were out of stock indefinitely,” Bird said.

He reached out to his neighborhood listserv and received an email from Blumberg, who was sourcing clear plastic and elastics — two face shield parts which are difficult to find — from TAP Plastics. Now, Blumberg provides Bird with filament to print face shield brackets; Bird prints out as many as he can; and then Blumberg picks the brackets up and assembles the full face shields.

To increase his printing capacity, Bird is fundraising so he can purchase additional printers. He’s currently attempting to receive a tax-exempt status by partnering with a non-profit organization. He also started a GoFundMe with which he’s raised over 1,400 dollars.

“Right now, I’m focusing on maximizing the number of face shields I can produce,” Bird said. “I’m aiming to get somewhere between five and seven new printers so I can produce roughly 70 to 80 brackets every day.”

Other students who lack the technology to actually produce equipment are placing greater focus on donations. Juniors Richard Qin and Cameron Fong are working with Churchill junior Andy Jiang and Blair junior Alex Jiang to donate masks. Qin and Andy’s parents both lived in China through high school, and they have connections with old friends working at Beijing University. With the help of their parents, the group contacted Beijing University and asked if they could purchase surgical masks and N95 masks — both of which are in short supply in the U.S.

“I first got the idea when I saw a Churchill student’s GoFundMe,” Qin said. “He was raising money and donating it all to hospitals. I thought maybe we could raise money then buy the actual masks for the hospitals.”

So far, they’ve raised almost 4000 dollars through their GoFundMe and over 1200 dollars through Paypal to donate over 20,000 masks to local hospitals, including Suburban Hospital, Adventist Hospital and the NIH.

“We just wanted to make a contribution to help first responders,” Qin said. “These people are saving hundreds of lives, and with hospitals short on equipment, the least we can do is donate some masks to help workers out.”