The Black and White • May 15, 2020 • https://theblackandwhite.net/67611/feature/a-second-set-of-family-whitman-sound-team-builds-close-community/ 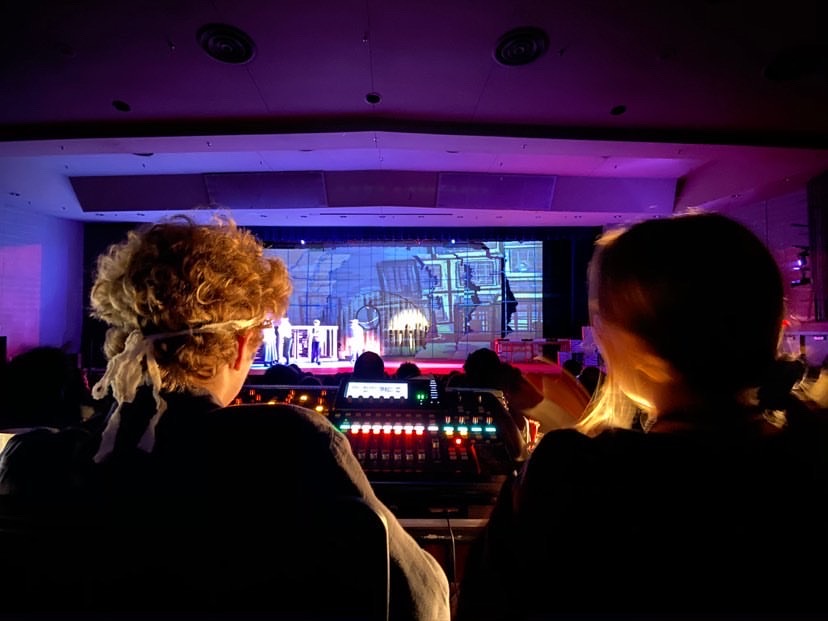 Members of the Whitman Drama sound team work the sound board during a rehearsal for "Peter and the Starcatcher," Whitman's most recent spring play. Sound team has bonded both inside and outside of Whitman Drama, creating a tight-knit community.

When senior Caroline Hatcher first joined Whitman Drama’s sound team two years ago, she had absolutely no experience working with microphones, speakers or soundboards. Now, she wants to pursue sound design professionally. Being part of Whitman’s sound team has not only enabled her to find a craft she loves, but also to meet “a second family,” she said.

“At first, I was really shy and didn’t expect to enjoy doing tech as much as I love it now,” Hatcher said. “But as I started to get more comfortable, they started to become some of the best friends I’ve ever had. It makes work a lot easier when you’re working with such reliable and passionate people.”

Though audience members may not see them during productions, Whitman’s sound team ensures that the audience can hear every actor and every sound effect. Behind the scenes, the crew members put microphones on actors, set up the speaker systems and mix sound in real time. Sound director Rowan Mohan believes that the strong bonds between the crew members lead to a better, smoother production.

Creating lasting friendships and connections has been a focus of Mohan’s ever since she stepped into her leadership role in her junior year. She brought the team together with her own mission statement: Put on the best show possible while focusing on building authentic relationships.

“Sound is the biggest community and the best thing I’ve ever done,” Mohan said. “It’s so unique because of the compassion of everyone, as well as how passionate everyone is for the actual work they are doing.”

And Mohan’s mission statement has proved successful in her two years as director. The connection between the sound team members is public and well-known within the Whitman Drama community, assistant producer Josie Wolfe said

“I see the sound team often and they always seem to be together,” Wolfe said. “They’ve been close friends for as long as I can remember and are probably the most tight-knit crew on tech.”

The team’s bonding isn’t just limited to inside the theater. They often get dinner together after rehearsals and shows or play board games and video games in each others’ basements. Last spring, the entire team vacationed in Mohan’s lake house at Deep Creek, Maryland. Together, they spent the weekend kayaking, mini golfing and enjoying each others’ company. This is a testament, Mohan thinks, to how close the team has become over the past two years.

“I was really inspired by the ‘Speaks’ segment on Whitman Shorts last year,” Leonard said. “I wanted to create something funny that everyone would enjoy.”

There was an overwhelmingly positive response to the first episode of Sound Shorts, Leonard said. He only intended to create one video, but after his friends and other tech crew members told him it “was the best thing ever,” he wanted to make more. Now, there are over 10 episodes of Sound Shorts — most are under four minutes. The team posts these videos on their shared Instagram account, which all sound team members can access

“I didn’t think much of it, so I was really surprised when people loved it,” he said. “It’s weird and it’s funny. People just love seeing their friends on camera.”

Mohan hopes that the Instagram account is still alive and running even after she graduates. She knows she’ll look back at the videos posted and remember all her amazing memories of the sound team, she said.

“I think there’s something special about the bond we have,” Mohan said. “We all prioritize these connections with each other, and because of that, we create really meaningful friendships.”