“I just got back up and skated it over again” 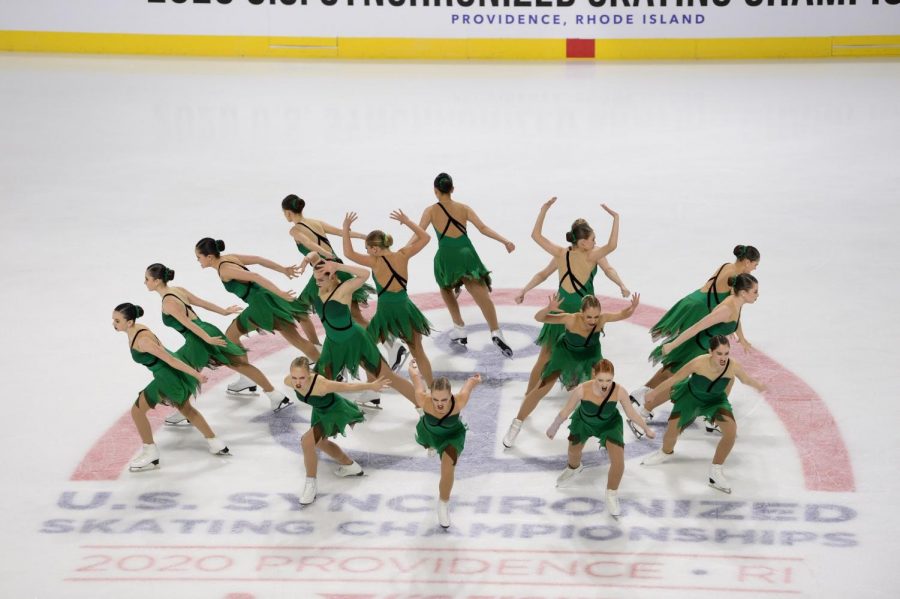 Junior Abbie Hall and her teammates compete at the U.S. Synchronized Skating Championships.

“We got this guys! Let’s get out there and crush it!” junior Abbie Hall shouted as she took to the freshly paved ice with 15 other Novice skaters.

When Hall was six, she skated for the first time at her mom’s college alumni skating event at Cabin John Ice Rink. Hall said she instantly fell in love with the sport and asked her mom if she could start lessons. Initially, Hall learned to skate just for fun. But after seeing one of her best skating friends do synchronized skating, she was impressed and decided to try it out too. Now, Hall competes at the Novice level with the synchronized skating team DC Edge.

To reach the level of success she’s at now, Hall has a very rigorous training schedule. She practices at Cabin John Ice Rink — her home rink — every morning for around an hour by herself, and she has team practices at Wheaton Ice Rink every Tuesday from 5:40 to 8:00 p.m. and every Sunday from 9:15 to 10:45 a.m.. In addition to practice on the ice, Hall does conditioning every week after practice at OneLife Fitness.

When she practices alone, Hall runs through many different skating disciplines. She does freestyle skating, dance and practices her skating moves like edges, turns and twizzles (spins that travel across the ice).

Not only does Hall have to wake up early for practices, but she also often has to miss school for competitions. Because of her packed schedule, Hall has had to hone her time management skills.

“The most important thing is managing homework and getting it done early. It’s really tough to miss school,” she said. “I like missing school, but at the same time I’m terrified of it because I miss so much.”

For team practice, the skaters go through their programs, or routines, which they learn every summer. Although most of their programs are only three and a half minutes, they require a lot of energy and concentration, Hall said.

“It’s a balance of exerting yourself to your absolute limits and not exerting yourself too much so that you fall or mess anything up,” she said. “By the end of the program, you’re very tired. Sometimes when the air at the rink is too dry, skaters cough out blood in the end.”

The International Judging System judges synchronized skating teams, and the teams receive points for the specific skating elements in their performances. The judges also give points for the teams’ “program component score,” which consists of artistic interpretation, quality of skating, turns, posture and flow across the ice.

When skaters mess up or fall, judges deduct points from the skaters’ teams. Each team aims to receive the highest score possible.

Since Hall’s father is a diplomat, she’s moved around a lot. From the end of seventh grade to the beginning of her sophomore year, Hall lived in Geneva, Switzerland, and since there wasn’t a good synchro team there, she missed important practice time. She’s currently trying to catch up on the time lost, she said.

In order to try out for the Novice team at DC Edge, skaters like Hall have to take tests in front of a panel of judges. Due to the difficulty of the skills required, there have been times when Hall has wanted to quit. The notoriously difficult judges, on top of Hall’s missed time while overseas, made it especially hard for Hall to keep going, she said. The second time that Hall tested for Novice, she fell on her head.

“In hindsight, it’s really funny. I didn’t think I got a concussion, but I had so much adrenaline that it didn’t matter,” she said. “I just got back up and skated it over again.”

Experiences like this have allowed Hall to grow into her to become an incredibly hard-working and persistent person throughout her skating career, her mom, Barbara Manning, said.

“She’s learned and experienced directly how it can take years of practice to master certain skills; through her hours and hours of practice,” Manning said. “Because synchronized skating is a team sport, she’s learned and experienced the things that people learn from being part of a team — how to work with others and support each other as teammates, and how to pull her own weight and do her part on the team for the good of the team as a whole.”

Aside from her parents, her coaches have also noticed Hall’s drive and determination. She’s great at applying constructive criticism and using it to get better, her coach Shira Selis said.

“She would try anything I taught her and she would do it over and over again until she got it right,” Selis said. “She always comes to our lessons eager to learn and takes in every correction. As a coach, you are always hoping for students like Abbie because she always gives 100% and asks really good questions relating to the skill we are learning.”

Now, Hall has set a goal of making the DC Edge junior synchro team, which has been named to represent the USA in international competition. She’s also working on passing her senior moves in the field to earn status as a United States Figure Skating Gold medalist.

“Abbie is one of my hardest working students. I admire her dedication to the sport and her endless supply of energy, which she puts forth in each practice and lesson,” Selis said. “So many of the skaters look up to her and want to follow in her footsteps.”