A Viking in France, part 3

Study abroad cancelled due to COVID-19 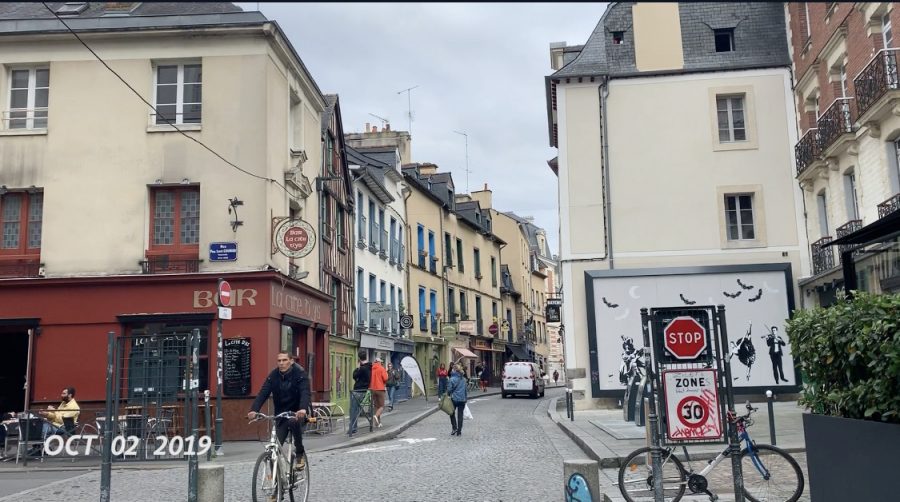 Rue Vasselot, in Rennes, France, is filled with people walking towards the many shops and restaurants.

This is my first time writing while not in a café and it’s heartbreaking. I’m back home, but I should still be in Europe. The school work was finally slowing down, summer was approaching and I was looking forward to my final three months in France. Unfortunately, due to the coronavirus outbreak, I had to leave early.

School Year Abroad has four different programs: China, Italy, Spain, and France. In January, the students in China had to fly back to the U.S.. On March 5, the Italy campus shut down after being the last study abroad program still open in the country. School days in France were consumed by outbreak statistics, but still, we remained positive that we could make it to the end of the year. My peers reassured each other that the French government was more relaxed than Italy’s and it was unlikely they would close all schools.

The Tuesday after Italy returned home, the students in the France and Spain programs had the choice to go back home to do online school or stay in their host countries. The size of our student body started decreasing by the hour, although the majority of us tried to stay in France for as long as we could.

Two days later, on March 12, I woke up with a dozen texts from my friends in the states. They updated me on the travel ban that Trump had announced while I was sleeping. I tried to push it out of my mind and went to the school building for class. Upon my arrival, our teachers led us to the common room to talk about the recent ban. Our director read out the letter that she was preparing to send to our parents. She read that SYA France and Spain were canceled. We learned that we had to be home back in the states by midnight the next day.

It was the weirdest and most surreal feeling to have to leave my life in France so suddenly. I had 21 hours before I was supposed to get on a train to the airport. Twenty-one hours to say goodbye to all my friends and do all of my favorite things– sights, food, and French fashion– one last time. My head felt heavy; it was full of all the trips I wasn’t going to be able to go on, the culture I still had yet to fully see, and the upcoming memories that I now wouldn’t get to make.

I walked down the streets of Rennes for one of the last times. I was going to miss the sound of everyone speaking French around me. I thought of how it was the most fluent I would ever be — I was finally speaking comfortably. Who was I going to speak French with when I got back to Bethesda? I strolled past the bread stores and the bakeries, smelling the amazing French pastries. I approached the outdoor crêpe stand where only six short months ago I went with my friends and had to beg them to order something for me. It’s funny to remember how I couldn’t compose a simple sentence in French back in September.

I woke up to catch my 6 AM train to Paris, which started the 24 hours of travel I had ahead of me. I saw my classmates who rode the train with me for the last time. Those were some of the only people who understood how sad it was to leave. We weren’t just leaving a trip to France, we were leaving a life we had settled into. We had to leave the culture, the food, the people, and the experience with no real closure. Three months ended in just 21 hours.

I know I’ll be back one day, and for that I’m grateful. I’ve learned that I want to study abroad again in college, and I’m going to pick a school that isn’t so close to home so that I can see what’s out there. I’m glad that I succeeded in documenting my six months of experience. I know that I will look back on it forever.