The Black and White • April 16, 2020 • https://theblackandwhite.net/67513/feature/girls-who-start-hackathon-promotes-female-entrepreneurship/ 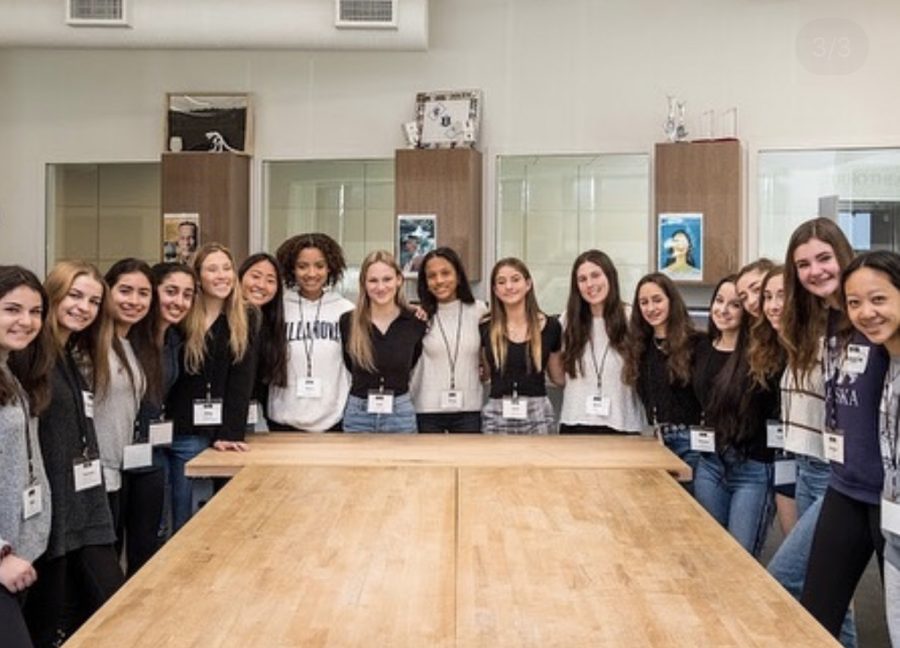 Members of Girls Who Start pose during March's hackathon.

One auditorium, one high tech science lab, 16 teams, 3 judges and 70 girls ready to make a splash in the CEO world.

Girls Who Start, a Whitman club focused on female entrepreneurship, held its first hackathon March 7 at Bullis Makerspace. The eight-hour day consisted of brainstorming an idea for an environmentally sustainable product or app for homes, learning how to pitch the idea, creating a prototype and pitching to three women CEO judges. The group with the best prototype won 1,500 dollars donated by PNC Bank to make their idea come to life. The runner-up group received 500 dollars .

Whitman’s team, Team 16, consisted of juniors Anisha Sankar and Shreya Reddy. Their idea was a trash can that sorted trash, compost and recycling. Though they didn’t win the prize money, they gained a broader understanding of what it takes to be successful as a female entrepreneur, they said.

“When I found out about this challenge that combined entrepreneurship and environmental sustainability, I was pretty intrigued and thought this would be a great experience,” Sankar said. “I’m really glad I came here. I got a lot of good notes from the speakers and good experience designing a product and pitching my idea.”

Mei Xu, one of the judges, is the CEO of Pacific Trade International and its subsidiary Chesapeake Bay Candles. Xu was elated when asked to be a judge on the panel because of her experiences as a woman in business; she also supports the idea of creating an environment for girls to bond and support each other, which can be hard to find among CEO’s, she said.

“I used to make candles,” Xu said. “I say ‘a candle loses nothing by lighting another on up’”

The Wootton chapter of Girls Who Start won the prize medal with their last-minute invention of The Recycle Buddy, a clip that attaches to garbage cans that states what parts of an item are recyclable and what parts aren’t.

“We actually had a different idea in the beginning and within the last five minutes we changed it,” Wootton sophomore Ellie Metx said. “So we kind of did it on the spot.”

Second place went to the Saint Andrews chapter, which created an app, “Pure,” that lets people know if something is vegan, ranging from mascara to cashew milk.

When choosing the winner, Xu looked for a product that was developed enough to be out on the market soon, she said

“Looking back, our product was complicated and too many steps,” Sankar said. “But you learn from the feedback you get.”

Girls Who Start is now preparing for their biggest event of the year: The annual summit at Georgetown University, which features presentations from several professional female entrepreneurs. This year’s summit was scheduled for April 18, but due to the COVID-19 outbreak, it has been pushed back to the fall. This year’s keynote speaker is Jeni’s Splendid Ice Cream founder Jeni Britton Bauer; other speakers include co-founder of Dormify Amanda Zuckerman, co-founder of Mented Cosmetics Amanda E. Johnson and FINCH the label founder Mackenzie Jagger.

“I decided to create this club to bring together girls who were inspired and wanted to have experiences with female entrepreneurs,” Girls Who Start founder Ariel Beck said. “We inspire girls by hosting workshops, introducing members to female entrepreneurs and creating a community for girls to come together.”