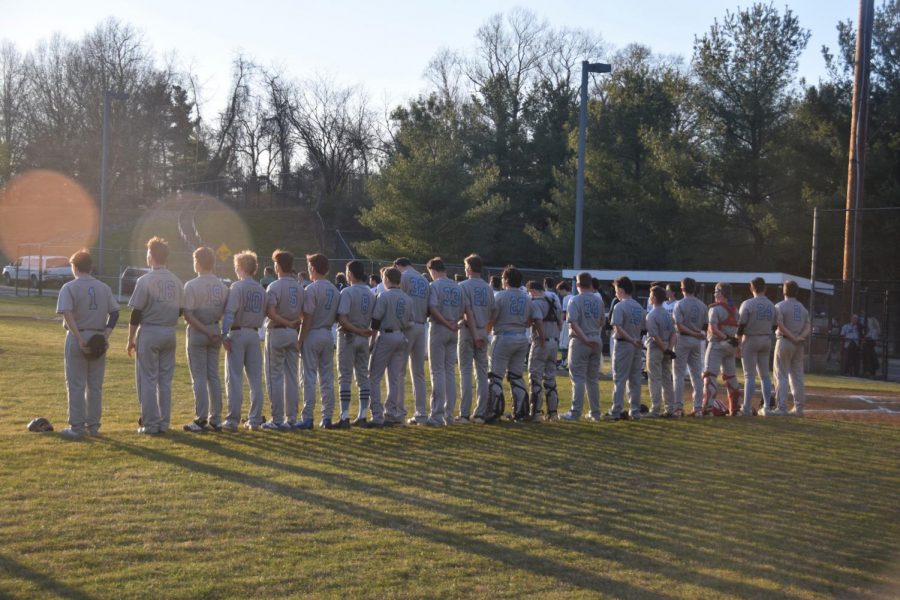 The baseball team looks out into right field while standing for the national anthem.

During my past three years as a part of the Whitman baseball program, I had only seen my coach cry once –– tears of joy after our program’s first-ever regional championship my junior year. But after practice on Thursday, March 12 –– the day before students left for a two-week break due to the COVID-19 outbreak –– my coach choked up once again. This time, however, he started to shed tears of sadness. In his mind, we had just finished the final practice of the season.

After I watched my coach cry for only the second time in nearly four years, I walked back to my car with my head down. But what he said didn’t really hit me until the next day. In third period on Friday, I started to cry too. I started to cry because I realized I wouldn’t be able to play the game I loved competitively before I head off to college. My senior season was going down the drain.

I would think most spring sport athletes feel the same way. Boys and girls tennis were state champions last year. Girls lacrosse, baseball and softball all made it to the state semi-finals. Our cross-town rivals, B–CC, ousted boys lacrosse in the second round of the playoffs last year. Athletes want the chance to compete, to avenge last season’s disappointments and to finish each season on a high note –– but that’s the worst part of the situation that athletes, especially the seniors, are in. We won’t get a chance to compete. A chance to win the region. A chance to get back to States. And the most devastating part: We won’t be able to do what we love the most.

At Whitman, there are hundreds of talented athletes, and some even go on to play at the next level. But a lot of us high school athletes are just going to be regular college kids next year. Maybe we’ll play some club ball here and there, or try intramurals, but there’s no longer going to be a trophy to play for or a banner in the main gym that could don our names. For us senior spring athletes, we won’t be able to put a Vikings’ jersey on ever again and compete. No more walk-offs or game-winning goals. No more team sleepovers or haircuts. And because this outbreak is so unprecedented and unpredictable, we can’t do anything about it.

In hopes of being able to play for some of the spring season, athletes from MCPS and local private schools have been posting pictures or videos of themselves on their Instagram stories playing their sport with the slogan “Let the kids play.” I wish I could say that social media campaigns to bring the spring sports community together would help the cause, but the world is facing a pandemic that is affecting thousands of people every day. Unfortunately, Governor Larry Hogan won’t see these Instagram stories, and with the state having extended the school closure to April 24, it looks like the spring sports season has come to an end for sure.

Seniors: Whether you were a four-year varsity player or even a one-year varsity player, you represented the Vikes while playing the sport you love. Playing sports for your school is a unique opportunity, and I hope my fellow senior spring athletes cherished the time like I did. The Whitman baseball program became a family to me. I developed relationships that will last forever, and I’ll never forget my time as a three-year varsity player. I was a part of history when baseball won its first-ever regional championship ––  not many high schoolers get to say that.

Senior spring athletes at Whitman wish their senior seasons could’ve ended differently; they put in a relentless amount of work in order to achieve their goals over the years. A tip of the cap to all of the senior athletes who devoted so much of their time and effort to being a Vike. And for all the non-seniors, put your jersey on next season with pride. Don’t play for yourself, play for the Vikes and for your teammates. Cherish your time as a part of Whitman athletics because you never know when it’s going to come to an end.