The Black and White • March 18, 2020 • https://theblackandwhite.net/67420/sports/four-whitman-athletes-receive-all-met-honorable-mention-boys-swim-wins-all-met-relay-title/ 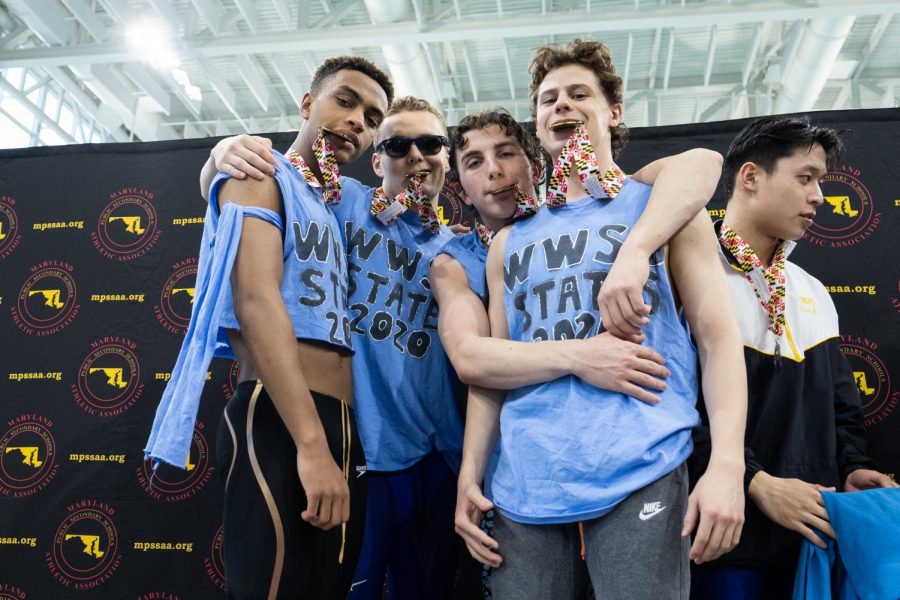 The boys 200-yard freestyle relay stands on the podium at the State Championship. The relay won All-Met 200-yard Freestyle Relay of the Year.

“It was just a matter of putting the pieces together,” Scott said. “The team always had four guys that could swim a pretty good 50, it just took us until the end of the year to swim together.”

Individually at the state championship, Cooper won the 50 and 100-yard freestyle races, Scott placed third in the 50 free and junior Jason Bretz placed second in the 100-yard backstroke. Cooper and Bretz set new Whitman team records in the 50 free and 100 back, respectively. Cooper, Scott and Bretz’s individual and relay performances earned all three swimmers honorable mentions.

Cooper, who received an honorable mention last year, was disappointed and had hoped to receive a higher award, he said.

“I’m not looking to be mentioned, I’m looking to be first team.” Cooper said. “I swim against a lot of the guys who were ahead of me on that list, and know I can get to the same place or better than where they are at this point.”

Senior and wrestler Stephanie Solloso was Whitman’s fourth and final athlete to receive an honorable mention. Solloso won the MPSSAA Girls Wrestling State Tournament. The tournament was the first girls wrestling state tournament the MPSSAA has ever held.

“I’ve never been in The Washington Post before, and it feels pretty cool,” Solloso said. “Aside from being named with a bunch of really good wrestlers, just having my name in a newspaper with such high popularity is pretty rewarding for all the work I’ve put in.”