The Black and White • March 18, 2020 • https://theblackandwhite.net/67402/opinion/injured-athletes-your-injury-isnt-everything/

Injured athletes: You can still find yourselves outside of sports 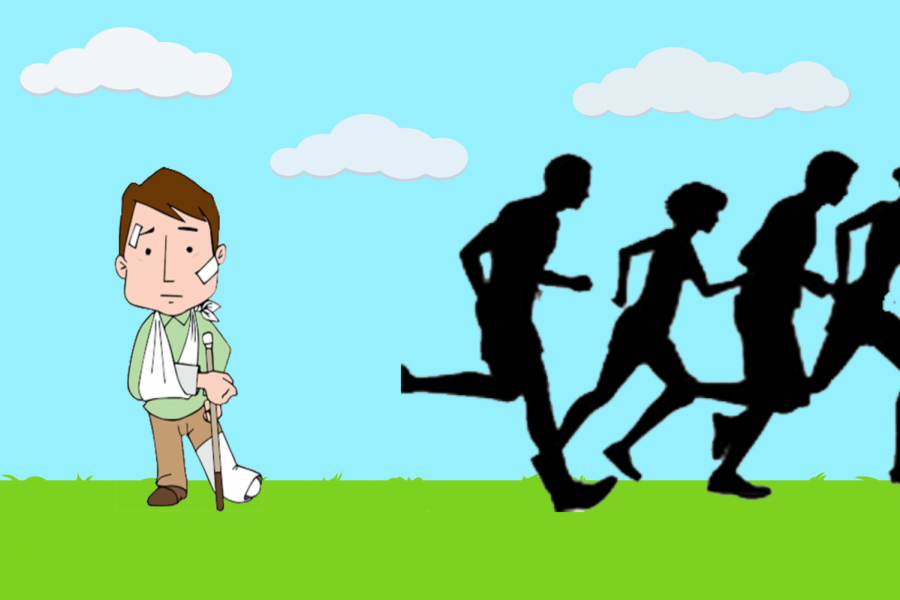 After having to miss out on cross country and gymnastics because of an injury, I managed to find new hobbies while still remaining a part of my teams.

Prince blasted through my earbuds and my heart pounded in anticipation and anxiety as I sat on the bus to a cross country meet last September. I’ve always had extreme pre-race nerves but I’d put extra pressure on this race because I knew it was a flat course, and I was finally feeling ready to get a personal record for my 5K time. After my warm-up, my teammates wrote “EAT MY DUST” across the back of my legs with face-paint, and I was ready. I bent over to triple-knot my spikes  — but I suddenly couldn’t stand up.

Brushing it off and still determined to set a personal record, I forced myself up and ran the race. But later that night, I found myself unable to move. My culmination of back problems — a result of years of competitive gymnastics — had triggered a flare-up and extreme pain in my lower back.

Ever since I can remember, sports have been a huge part of my life. I’ve competed in gymnastics since elementary school; I’ve played basketball, soccer and tried swimming; and since freshman year I’ve run on the track and cross country teams at school. I’ve met some of my best friends on my sports teams, and I’ve learned a lot about commitment, teamwork and determination.

In 2019, I was injured for about nine months. In February, I suffered a head injury from gymnastics which contributed to persistent headaches for several months. Then, in August, I sprained my ankle for the second time. And in September, to top it all off, I injured my back during that cross country race.

My back problems only worsened after that, and what I hoped was just pain, turned out to be a spinal injury that has kept me from playing sports since. Instead of cross-country practices and gymnastics meets, my main commitments were doctor’s appointments and physical therapy.

Since I’ve been injured, I’ve noticed a change in my energy levels and productivity; my life doesn’t have the same structure of meets every Saturday, Whitman practice every day after school and club practice most nights. According to the NCAA, injury for some student-athletes can trigger or unmask serious mental health illnesses such as depression, anxiety, disordered eating and substance abuse. Last year, as my injuries disrupted my routine, I began to feel lost. I found it difficult to redirect my energy into other activities, and I didn’t know what to do with the newfound time on my hands.

For all the other injured athletes out there, it’s important to find things to fill your time and pursue new hobbies. In September, my injury turned into chronic pain, so I still don’t know when I’ll be able to return to sports. After the initial recovery period when my pain was the worst and had I caught up on way too much Netflix, I decided to look into new things I could do in my free time.

I tried out new hobbies, eventually discovering that baked goods looked better in the Great British Baking Show than in my kitchen, and my jazz career was better left in middle school band. Ultimately, I decided to apply for a part-time job at a pottery studio. While I still struggle with chronic pain at work, I feel like the studio gives me a purpose, a place to go every week and something to schedule my life around — just like I used to do with sports practices.

One of my biggest challenges though, has been remaining active. For a while, I avoided exercising to build back my strength; I felt like it was pointless if I couldn’t run 6 miles or tumble in my floor routine. But being able to do minimal exercise — with approval from a doctor —  releases endorphins and helps me feel like I’m back in the game. I’ve found that even just going on short walks helps me feel more active and boosts my mood.

Without the constant support system of a sports team, injured athletes can often feel isolated. For me, it’s been important to maintain ties to my teams: visiting meets and competitions to cheer them on and reaching out to teammates to just hang out. Going to cross country practices and meets while I was injured this fall and being surrounded by a supportive group of people was imperative to my recovery process, even though it was difficult to see my teammates run while I couldn’t.

It can be hard for athletes to rediscover themselves during and after a long-term injury. Having to stop playing a sport that you love can be a difficult process, but surrounding yourself with people who support you and focusing on taking care of yourself can make the recovery process a little more manageable.

Injuries, while painfully difficult both physically and mentally, have helped me to view myself as more than an athlete.  I think that’s something all athletes —  injured or not —  should recognize. I can be a pottery shop employee with dreams of being on a competitive baking show and still cheer on my team from the sidelines — until they’re back cheering for me when I’m back on the track.