The Black and White • March 7, 2020 • https://theblackandwhite.net/67322/sports/boys-basketball-falls-to-churchill-67-50-in-the-regional-championship/

Boys basketball falls to Churchill 67–50 in the regional championship 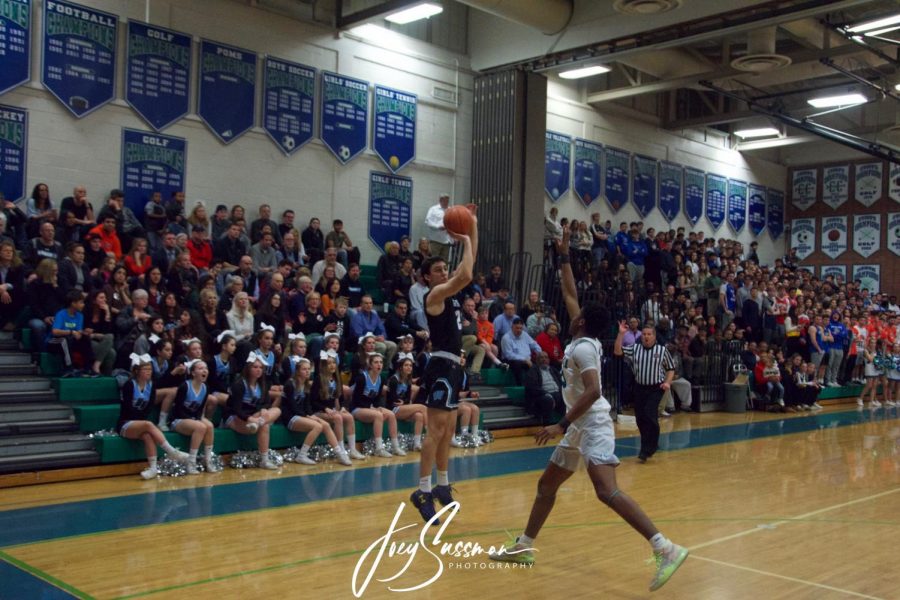 Forward Mark Dimitrov takes a three-point shot in the regional final against the Churchill Bulldogs.

The boys basketball team (13–12) lost to the Churchill Bulldogs (17–7) 67–50 Thursday evening in the regional championship round of playoffs.

The Vikes started off slow, struggling to contain the Bulldogs’ offense and get past their full-court defensive pressure. Center Michael Bass hit two threes late in the quarter, bringing momentum to the Vikes offense. The Bulldogs shot well from the perimeter, and the Vikes trailed 20–11 at the end of the quarter.

The team played stronger defense in the second quarter, forcing the Bulldogs to take difficult shots and guarding the Bulldogs’ big men in the paint. With two minutes remaining in the half, guard Justin Niles hit a three, tying the game 24–24. The Bulldogs hit two more shots in the final two minutes and led 28–24 at halftime.

The game remained close throughout the third quarter, with both teams fighting to take the lead. The Vikes took a 33–31 lead with five minutes remaining and held the lead until the Bulldogs went on a six point-scoring streak to tie the game up 37–37 with a minute remaining. The Bulldogs hit a buzzer-beater three in the final possession of the quarter, taking a 40–37 lead going into the final quarter.

The Bulldogs kept their momentum in the fourth quarter and went up 49–39 with six minutes left in the game. A minute later, guard Josh Weinberg fell to the floor and hit his face on the court, chipping his two front teeth. He subbed out of the game for a minute, during which a parent picked the chipped parts of his teeth off the court, but he then went right back in and played for the remainder of the game.

“We will all definitely miss the seniors next year,” guard Tyler Chapman said. “It was disappointing for all of us to lose last night’s game, especially for the seniors who were on the team last year and lost in the same round.”