A blog about my dog 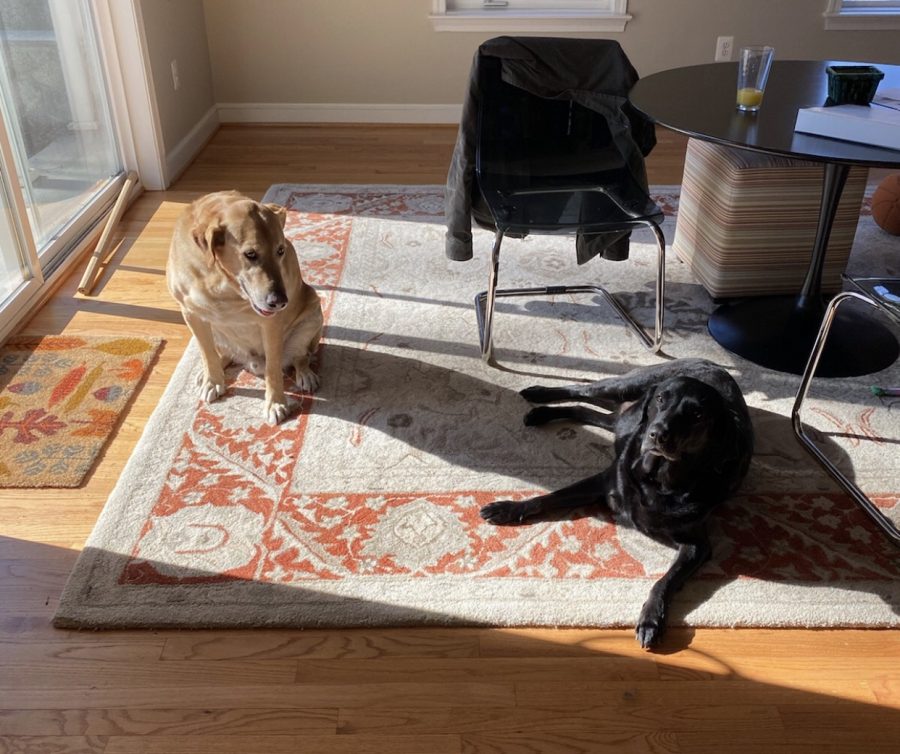 Roy (left) tries to get Gali’s attention while Gali (right) gazes directly into the camera.

I’ve been used to having only one dog in my house. I knew my dog’s daily routine like the back of my hand; I knew down to the detail of what time she likes to sleep at night. But when my family introduced a second dog into our life, everything changed.

About a month ago, my family decided to foster a dog named Roy to accompany our current dog, Gali. We envisioned Roy as a younger, more energetic dog who would help Gali get in shape by making her run around like a personal trainer. But, things turned out very differently: their relationship was one of mutual apathy rather than trainer and trainee.

The moment Roy padded into my house, he made himself comfortable. Instead of playing together, Roy and Gali consistently ignored one another.

And Roy wasn’t the well-behaved dog we had previously imagined either. On his first night with us, we tried to put him in a crate — as the fostering agency had instructed —  but the cage proved no match for a yellow lab, and he broke out within 30 seconds.

I know it seems like all I’ve done is complain about Roy’s each and every move. However, as time passed, I realized that even though Roy wasn’t what we expected, having him in our house was an absolute delight. He was as affectionate as a dog could possibly be, and he kept Gali company during the seven hours I was at school, even if they weren’t best friends. The one minor problem we ran into was that Gali sometimes got a little jealous; she thought that Roy was getting all the attention. Everytime we would pet Roy, Gali would try to jump in front of him. To put Gali at ease, we let her accompany us on our drive to school — her favorite part of the day — without Roy.

Someone came to adopt Roy after less than a week. We missed him, but we were glad he found his “furever” home. Since fostering Roy was such a great experience, we decided to foster another dog.

Our next dog’s name was Bowser, but his personality didn’t fit his stereotypically menacing name. When we got him, he had a giant cone around his head because he had been neutered only three days prior. He was extremely skinny and had scars all over his head. He more accurately represented a “rescue” dog compared to Roy.

The first night with Bowser, another family came over for dinner and brought their dog. Bowser became so aggressive the moment the other dog arrived that the other family had to take their dog home. In hindsight, it was a bad idea to introduce another dog into Bowser’s life while he was still getting accustomed to his new home.

A whole new set of problems arose at night. Bowser wasn’t able to climb our hardwood stairs because his long nails prevented him from gaining traction, so he needed to stay in the cage; if he escaped, he would fall down the stairs. After much trial and error, I figured out the best combination of duct tape and carabiners to ensure that Bowser couldn’t escape his cage.

Bowser was different from Roy, but my family loved both of them equally. Like Roy, a family adopted Bowser relatively quickly.

After spending only a short time with Roy and Bowser, I’d formed a bond with each of them. Friends frequently asked me how I was able to become attached to a dog only to have to give it away later. Honestly, it was really difficult, but I know that the time I spent with these dogs will stay with me — and hopefully, with them — for a long time. All I can say is that I’m excited to foster our next dog, whether he’s Gali’s new best friend or a cone-wearing troublemaker.