The Black and White • March 1, 2020 • https://theblackandwhite.net/67258/feature/whitman-students-fundraise-to-help-fight-the-coronavirus-outbreak-in-china/ 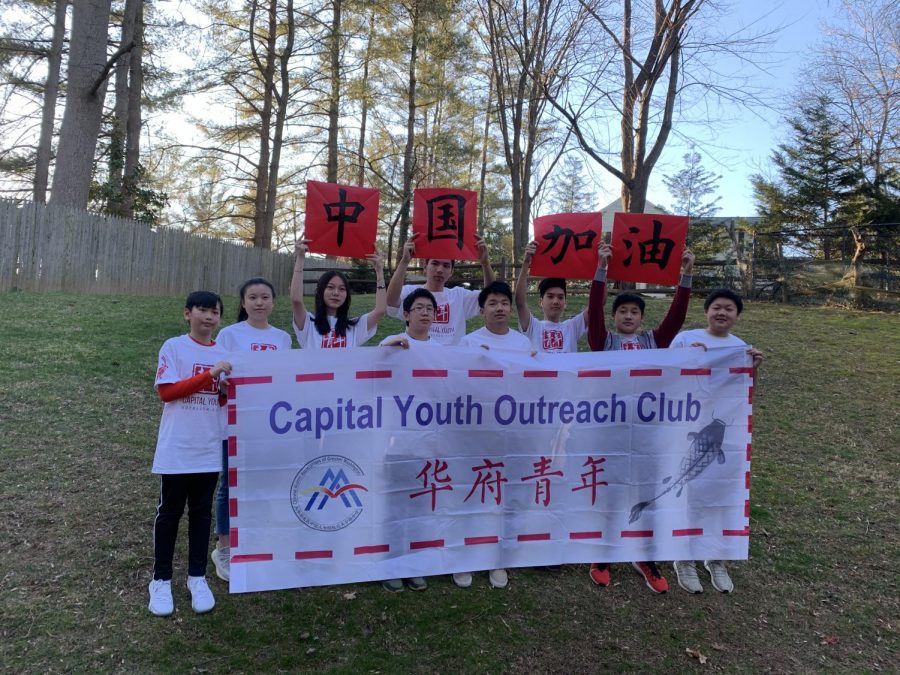 Members from the Capital Youth Outreach Club pose at an award ceremony recognizing their fundraising efforts for the coronavirus epidemic.

A few days before the Chinese Spring Festival, a holiday signifying family reunion, junior Baichuan Wang’s father was planning to fly back to the United States after a business trip to China. But he soon learned that he would have to extend his stay abroad — flights from China to the U.S. were either delayed or canceled due to the coronavirus epidemic.

Finally, after waiting for four days, Wang’s father was able to fly back to the U.S.

“He came back from Beijing on the last plane that was allowed to fly,” Wang said. “He’s back in the United States now, but he had to be isolated. We weren’t able to see him for 14 days.”

The recent coronavirus outbreak, discovered in January in a seafood market in Wuhan, China, has affected many families. Since the initial outbreak, the virus has spread rapidly, having already affected tens of thousands of people and killed thousands worldwide. The virus’ highly contagious nature has prompted the World Health Organization to declare the outbreak as a Public Health Emergency of International Concern and has left countries largely unprepared, leading to shortages in protective face masks and medical supplies.

Apart from Wang, the virus has affected other Whitman families too. For students who have family living in China, the outbreak is particularly frightening. Junior Celina Fratzscher’s grandparents live in Hangzhou, China. The city is now on lockdown and resources are scarce.

“I’m concerned about whether there’s going to be food shortages in the near future since not a lot of food is getting home,” Fratzscher said. “They’re being advised not to go outside.”

To help alleviate China’s shortage of medical supplies, Wang and sophomore Yi Jing began a fundraising campaign in January through the Capital Youth Outreach Club — a student-run club that Jing and Wang co-founded with several other students in the Washington metropolitan area in 2018. Club members volunteer for various local organizations with a focus on supporting the Asian American community. The CYOC is the first student-led high school organization from abroad to aid the coronavirus epidemic through fundraising.

“Not only is there a shortage of medical resources, namely protective gear and masks, but basic items are also sold out or depleted,” Jing said. “Our goal is to do our part to help families get through tough times.”

The first quarter of fundraising ended Feb. 8, at which point the club sent its funds to its sister organization, the China Alumni Association of Greater Washington, a group of Chinese scholars associated with American colleges who will purchase needed resources and ship them to Wuhan. Some of the funds will also go to the China Youth Development Foundation, a non-profit organization that will use the money to aid young volunteers in infected areas.

Chinese Ambassador to the U.S. Cui Tiankai recognized CYOC’s efforts and signed a certificate of accomplishment for them. The China Alumni Association of Greater Washington invited the members to an award ceremony that took place in Bethesda last Saturday, where they distributed the certificates and shared fundraising experiences.

The club raised several hundred dollars within their first week of fundraising, Wang said. As of last weekend, the club had received more than $3,000.

“My best friend is from Wuhan,” Wang said. “Having family and friends in China motivated me to help.”

In addition to fundraising, junior Lily Yin spearheaded an independent artistic project that features 16 students in a video, in which they sing and perform in sign language a song of encouragement to raise awareness and send support to those who are struggling. Yin posted the song to social media on Feb. 10.

“In January, my teacher in China posted a song on social media for Wuhan,” Yin said. “I asked myself, ‘why can’t I also make a music video for Wuhan and China?’ So I asked other Whitman Chinese students to make this video together, and they were all happy to.”

In addition to fundraising, Wang said he hopes to stop the stigma, xenophobia and racism against Chinese people regarding the virus. Wang said that when one of his friends stayed home for a week after he got his wisdom teeth removed, people said that he got the virus. Others have also come up to Wang and asked if he had been infected, purely because of his race, he said.

“We are trying to spread awareness through this initiative,” Wang said. “I think [the stigma] is really bad, and rumors like these can also scare the students. We want this crisis to end as soon as possible so that the misinformation can also stop.”

Celina Fratzcher is a metro writer for The Black & White.

To help the students’ fundraising efforts, donate at: