The Black and White • February 25, 2020 • https://theblackandwhite.net/67219/sports/boys-swim-and-dive-captures-first-state-championship-in-whitman-history/ 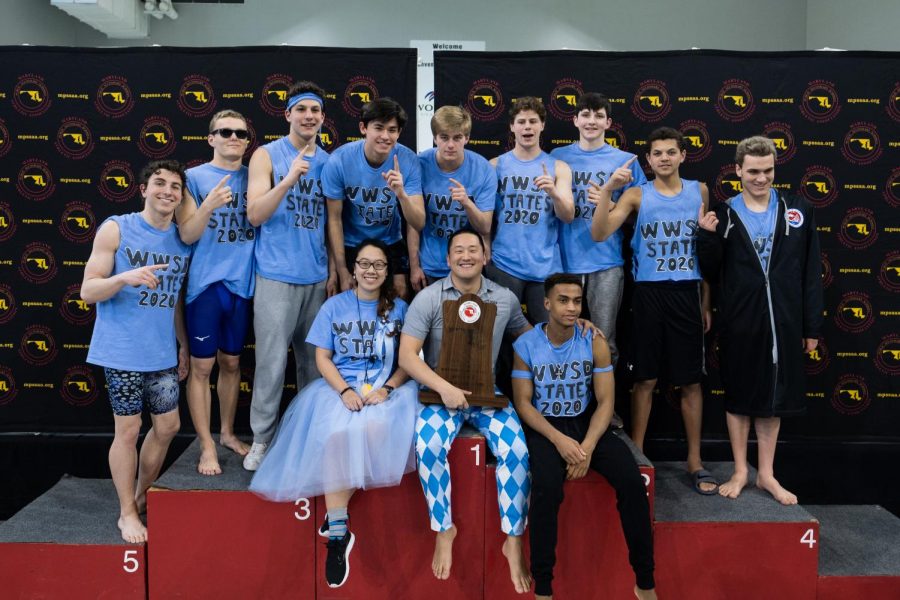 The boys pose on the podium with coach Chris Schlegel and assistant coach Mira Chung. The boys placed first at States.

On Saturday, Feb. 22, the boys swim and dive team made history by winning its first MPSSAA 4A3A State Championship. The title capped off arguably the boys’ best season in history, with highlights like an undefeated regular season, a regional championship and a third place finish at the Washington Metropolitan Interscholastic Swimming and Diving Championships. To add to this dominance from the Vikes, the girls finished in fourth place out of 26 schools in another strong performance, their highest place since 2013.

In the biggest stage of the season, the boys did not disappoint. The Vikings scored 344.5 points, nearly 50 points more than the second place finishing Churchill Bulldogs. The Bulldogs had defeated the Vikes three weeks prior, claiming the MCPS Division 1 title, and had won States in both 2018 and 2019, so the Vikes came back with a vengeance in the post-season to take them down at Metros, Regionals and finally States. The Vikes won 4 out of eleven races and finished in the top three in 7.

On the individual side, Cooper had a fantastic performance. Aside from helping the team win the two freestyle relays, he won the 50 and 100-yard freestyle races with times of 21.13 and 46.35 seconds, respectively. Cooper led all boys swimmers with four first place finishes.

“It was awesome to finish with a team win and have everyone compete as a unit,” Cooper said. “We all had a team mentality, fighting for the group instead of the individual and that’s what helped us win.”

Although the girls didn’t achieve the same feat as the boys, they still had a very good day in the pool. They finished in fourth place with 187.5 points, behind B–CC, Walter Johnson and Churchill. With the combined boys’ and girls’ combined scores, the Vikes won the meet overall.

Their day was highlighted by four top-five finishes, including one second-place finish by sophomore Victoria Svensson, who swam the 100-yard backstroke in 57.27 seconds, less than a second out of first place. Also, a team of freshman Elena Harrison, junior Susan Rodgers and seniors Annie Morris and Ally Navarrete finished third in the 200-yard medley relay with a time of 1:49.59. The girls’ freestyle relays both placed fifth.

On the diving side, two Vikes qualified for the state meet, sophomore Lily Hsu and senior Hannah Donner. Hsu placed sixth and Donner placed ninth; Hsu is in consideration for All-American status.

This fourth-place finish capped off an up-and-down season for the girls; the team finished with a 2–3 regular season record, a sixth place finish at Metros and fourth at Regionals.

Head coach Christopher Schlegel was immensely proud of his team and their first ever state championship.

“We definitely ran into some bumps along the way,” Schlegel said. “But this team had the grit to push through and get the job done. It was great to see our kids work through some trials and end up as state champs.”

With a large group of talented young swimmers returning for Whitman next year, the Vikes are looking forward to defending their title.

Ally Navarrete is an Online Managing Editor for The Black & White.