The Black and White • January 31, 2020 • https://theblackandwhite.net/66972/news/to-discuss-boundary-analysis-mcps-holds-community-meeting/ 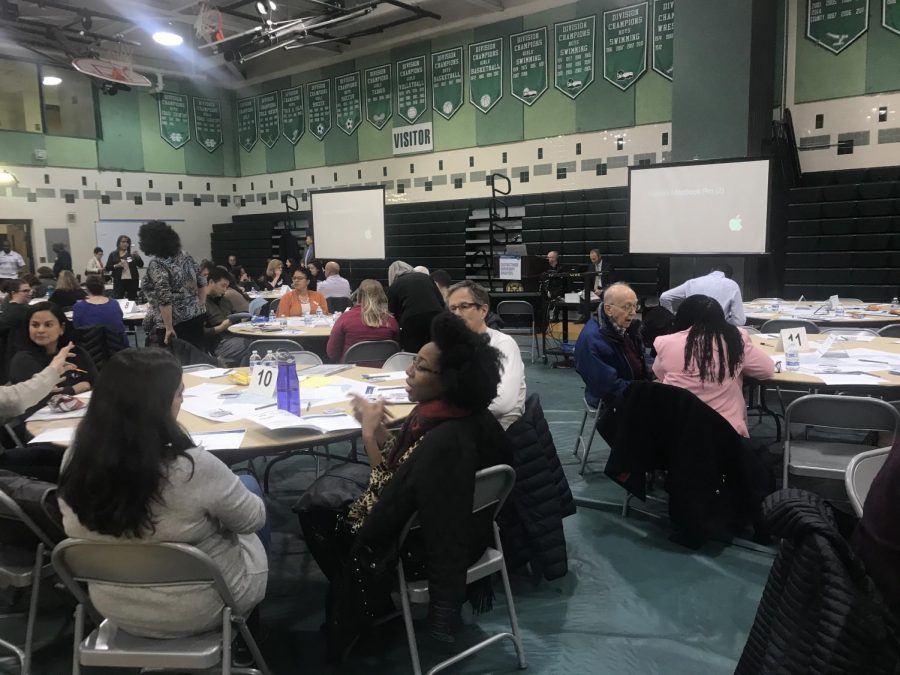 Participants at the MCPS boundary meeting Jan. 23 discuss their thoughts on the boundary study in small groups.

The Montgomery County Board of Education and the urban design firm WXY hosted the last of six community meetings about the boundary study Jan. 23 at Walter Johnson High School. At the meeting, community members had a chance to give feedback on the study, which is a collection of data on all of the school clusters in the county.

The meeting included a presentation on the analysis with breaks for small group discussions as well as a 20 minute Q&A session at the end. The presentation centered around the three factors of the boundary study: how crowded each school is, how close the school is to where the student lives and the diversity of the school.

“We have an imbalance in the system where half our schools are overcrowded and the other half are under-enrolled,” Board of Education candidate Sunil Dasgupta said. “And over a third of MCPS students don’t go to the school that’s closest to them in the first place.”

Around 680 people attended the meeting. Due to the high number of people that showed up, not everyone was able to participate in the discussions. Organizers split participants between the cafeteria and the gym, while the rest watched a live broadcast of the presentations in the auditorium.

“We should have equitable and sensible school district boundaries, and we haven’t redrawn them in so long,” she said. “I don’t think Whitman students get as good of an education as they could with a more diverse student body.”

The analysis has been a source of controversy throughout MCPS, leading to tensions boiling over in the past. Some parents, like Whitman parent Yvonne Van Lowe, want to see the results of the study before taking a side on changing boundaries.

“Let the process happen,” she said. “This is getting data. What’s wrong with looking under the hood to see what’s happening?”