The Black and White • January 30, 2020 • https://theblackandwhite.net/66914/feature/qa-with-georgetown-mens-soccer-coach-and-ncaa-champion-brian-wiese/ 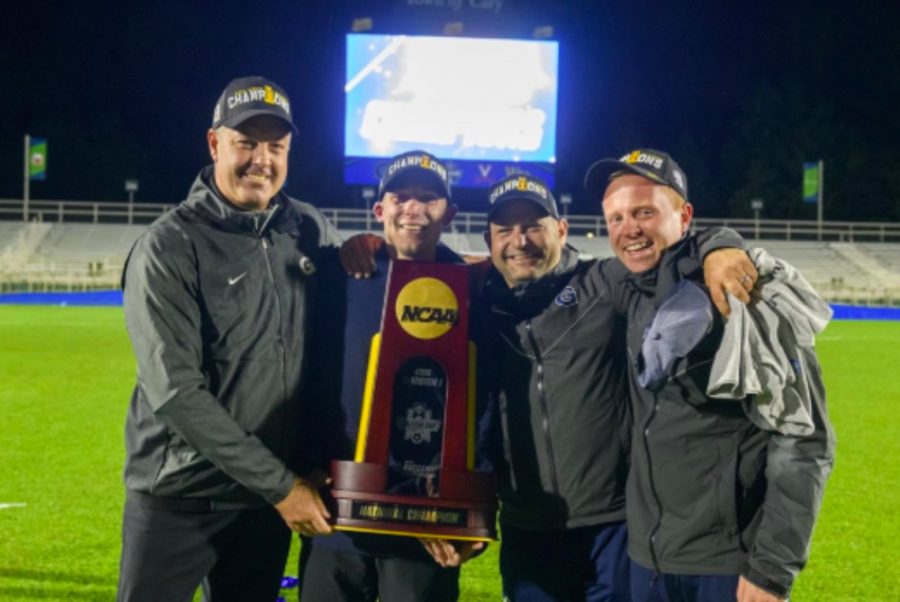 The Georgetown University Men’s Soccer team won the NCAA championship title for the first time in the program’s history Dec. 15, 2019. The Hoyas fought the University of Virginia Cavaliers in a stunning match; regulation time ended with a 3-3 tie, forcing the game into overtime. Freshman midfielder Aidan Rocha was able to place the Hoyas in front of the Cavaliers by scoring the tie-breaking penalty. Georgetown goalkeeper freshman Tomas Romero had to make one final save in order to solidify their lead. As freshman Cavalier Axel Gunnarsson took the final shot, Romero swooped in and made the game-winning save, putting the Hoyas ahead of the Cavaliers 7-6 to win the title. The Black & White had a chance to interview the Hoyas’ head coach, Brian Wiese, who is a Whitman parent, about the season, the championship title and himself.

The Black & White: How did you become interested in soccer? What’s your soccer story?

Brian Wiese: I grew up in Albuquerque, New Mexico, and my older brother fell in love with the sport. I wanted to hang out with him. He and his friends would play soccer, so I would play soccer too. I was lucky enough to be around good teammates as a youth player and had a lot of success; that led me to play soccer in college as a goalkeeper at Dartmouth. The person I played for was Bobby Clark, who was a famous international goalkeeper for Scotland and played with Aberdeen Football club for years. Playing collegiately for him was very impactful for me because falling in love with coaching was the result of being around Bobby.

B&W: After you played soccer in college, what career path did you pursue? How did you end up coaching soccer?

BW: I was always going to be an engineer. I liked what I studied, and I went to graduate school at Stanford. I was going to get a master’s degree at a two year mastery program there, but by sheer luck, it coincided with the arrival of Coach Bobby — where he was going to take over the Stanford soccer team. By that sheer serendipity, he was excited for me to help out because he knew me and trusted me. So while I got my master’s degree, I helped him out as a coach. By the time I finished my master’s degree, I realized coaching was something I enjoyed a lot.

B&W: Did you coach anywhere else before Georgetown?

BW: My first real coaching experience in college was during my senior year at Dartmouth. I coached a U-15 boys team called the Upper Valley Lightning in Hanover. The team needed help and I thought it would be a fun way to spend my spring since we finished playing. After that, I started working as an engineer in San Diego where I randomly started helping with a U-17 girl’s team called the Delmar Sharks. I had a great time with that. The next year, I had the opportunity to stay with Coach Bobby as an assistant at Stanford for five years, from 1996 to 2001. When he went to Notre Dame, I went with him for five years from 2001 to 2006. I was offered the head coaching job at Georgetown in 2006, and I’ve been doing that ever since.

B&W: How did you land on becoming the Georgetown coach?

B&W: What was particularly unique about this group of guys playing this year? Were there any standout players that really brought the best out of the team?

BW: We had a whole bunch of special players. We had Dylan Nealis, who was a first team All-American, Derek Dodson and Jacob Montes, who were third team All-Americans. Having three All-Americans on a single team is a very rare thing that we were really fortunate to have. Meilas was also a finalist for the MAC Hermann trophy.

What I think was really unique and special was that we had such a deep team. We used 18 to 20 players every game, and whenever we subbed in players the level never dropped off. We just kept coming at our opponents and gave them problems with fresh players who were really talented, and that was really the key to our success all year.

B&W: When, during the tournament, did you think you had a chance at the championship? Was there a turning point or defining moment in the season?

BW: We always thought we were going to be pretty good, but I think we think that every year. I actually think that the game we walked away from where we thought, ‘you know what, we could be pretty darn good’ was our game at UCLA, which was the second of the year, in California. We played a good UC Irvine team one Friday and won 1-0, and then we played at UCLA on Monday. We went down 1-0 two minutes into the game, and the first 20-30 minutes of the game was pretty tough. For us, we weren’t creating a whole lot, and then we made three or four subs at that point of the game. Those subs changed the game. One sub that we made, Zach Riviere, scored a hat trick in that game. We ended up winning that game 5-1 at UCLA. That was, for me, the first indicator that we had a starting group and then also reserves that, when they come on, actually make us better. That was pretty fun to see, but that was the first time where we thought, ‘you know what, we’re gonna be pretty good.’

B&W: What goes through your mind on the sidelines?

BW: As a coach, every game feels the same and you’re always worried. But I think it’s important to emotionally detach yourself from the pressures of the game itself so that you can make clear-headed decisions. If you get too worked up, emotional, angry, or excited, then you tend to not think clearly and calmly about the game.

B&W: What was your biggest takeaway from this season?

BW: I think that the biggest takeaway for me was how well we were able to do based on just how much we trusted our players. We never lost trust in who our guys were and how we were operating. We tried not to deviate from trusting our subs and ourselves with the character of the team, and in critical moments we continued to rotate players and trust them. They all understood their roles, and the fact that we were able to trust them throughout the season, and regardless of the season, is what ultimately led us to winning the national championship.